Welcome to our Formula One 2013 preview week on The Lowdown Blog. This week is dedicated to getting you up to speed for this season with our annual F1 preview. We’ll have the usual examination of rules changes, team and driver outlooks and my predictions for the upcoming season. First, is a roundup of some news that we haven’t talked about yet on the blog.

There is some concern over this season’s tyres. The first Barcelona test drew a number of criticisms from drivers who felt that the tyres were degrading too quickly and the result would be a race where drivers would have to make a minimum of five pit stops.

Ironically, the most vocal driver that week was Sergio Perez. His reputation among experts is that he’s the easiest driver on tyres in the paddock. The next week, it was Sebastian Vettel complaining that the tyres only had one lap of hard running in them before performance drops off.

Pirelli Motorsport boss Paul Hembery says that it all comes down to temperature. The first week of running in Barcelona was quite cool which meant that the tyres couldn’t come up to optimal temperature. Pushing the tyres when they’re too cold apparently turns them to shreds.

Of course, this means that a cold day for any Grand Prix could result in the race becoming a craps shoot. That’s not really what we want F1 to be. Tyre management should be a necessary skill to win a race but it shouldn’t be the only skill required. If races turn into clustermesses with half-a-dozen pitstops, there’s really no skill required to win, just luck.

The final race seats were filled at the final pre-season test in Barcelona. Well, it was one race seat filled and a second one with a driver swap. As is disappointingly common in Formula One nowadays, the reason for both of these moves was money.

Force India’s winter-long debate over who should drive alongside Paul di Resta was settled on the Wednesday before the final pre-season test. It was decided that Adrian Sutil would take the drive over Jules Bianchi. Sutil was rumoured to have a larger sponsorship package than Bianchi which was enough to trump the rumoured Ferrari engine deal that the Frenchman came with.

Fans of the sport will know that Sutil returns to the team after a one-year hiatus. That time away from the team was a result of stabbing Genii Capital CEO Eric Lux in a Shanghai nightclub and the resulting assault conviction. It will be interesting to see if some jurisdictions let him into the country to race given his criminal record.

Don’t feel bad for Bianchi, though. When Luiz Razia’s sponsors didn’t pony up the promised funding for his race seat, Marussia showed him the door and hired Bianchi instead. With Cosworth not expected to be developing a V6 for 2014, Bianchi will come with sponsorship and likely an engine deal. He’ll probably come with a bit more pace than Max Chilton when he gets used to the car. I’d expect Chilton to come out of the gates a little faster because he has put many more miles in the car than Bianchi.

A BBC report says that not only is Honda planning to return to Formula One as an engine supplier with an old friend. It appears that McLaren, who had a golden run in the late 80s and early 90s with Ayrton Senna and Alain Prost powered by Honda engines, is going to join up with Honda for their return.

McLaren’s deal with Mercedes runs through 2013 but has a team option to extend the deal for each of the 2014 and 2015 seasons. The report says that Honda will be ready for a re-debut in 2015 so McLaren will reportedly only exercise one of those two option years.

The separation between McLaren and Mercedes has been a long time in coming. It has been rumoured since the Spygate saga which soured relations between the two entities. Mercedes management wasn’t particularly happy with being implicated by association in that scandal which led to the deal with Brawn GP (now Mercedes AMG F1). 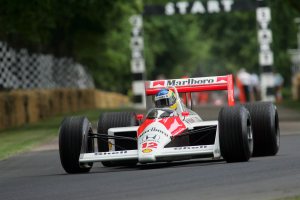 The return of Honda to sport would be vindication for the new engine formula. The switch to smaller turbo V6s with energy recovery systems was supposed to make Formula One more relevant to road car technology. Since the technological innovation of the 80s and early 90s were outlawed from F1, technological innovation from F1 has been minimal apart from KERS and seemless shifting gearboxes. It’s nice that a manufacturer is getting into F1 for some reason other than it being a marketing platform.

Putting together this year’s calendar proved to be far more interesting than anyone was anticipating. The 2013 schedule went from 20 races to 19 to probably 20 again to 19 to most likely 18 before settling on a 19-race season.

The New Jersey race’s postponement resulted in a search for a replacement which ended when everyone realized that Bernie wanted way too much money to host one event with no promise of a return trip. Money was also the reason why we nearly ended up with 18 races as the Nurburgring’s bankruptcy almost forced them to withdraw from hosting this year’s German Grand Prix.

Bernie very nearly walked away from the negotiating table with the Nurburgring’s bosses because the amended deal they wanted didn’t give him enough money. Three days later, the two sides reached a deal that was more to Bernie’s liking which presumably means that the Nurburgring found some pennies left in the back seat of the Ring Taxis. Naturally, though, when announcing the deal, Bernie talked about tradition and no one believed him.

I know Mr. Ecclestone could use the money after losing a rather large portion of his fortune to his divorce (and what’s left seems to be spent by his daughters) but bankrupting race tracks and would-be race organizers gets you no where. To him, F1 one is a business. To everyone else involved in or trying to get involved in the sport, racing is a passion. Making money is fine but greed isn’t always good.

For a couple of hours in early February, it looked as though we would have 12 teams on the grid again in 2013. Like I said, though, that lasted only a few hours between an interested party saying they were going to make the grid by buying HRT only to have the FIA and Bernie put the kibosh on it quickly.

The interested buyers of the bankrupt HRT was a group of American and Canadian investors operating under the name Scorpion. They were planning on buying the team’s assets and fielding a car this season. At some point, they would even move the team from Spain to a headquarters near Silverstone to get the team into the heart of F1 country and looking like a proper effort.

Their biggest problem was that HRT didn’t have a spot on the entry list so the assets would get Scorpion a car but not a grid spot. However, Scorpion said, we have a letter from Bernie saying that the FIA would let us on to the grid for this season.

Well, that effort didn’t last long. Less than 24 hours after the initial report about Scorpion’s late entry into F1, Bernie piped up and said that he didn’t think the FIA was going to give them an entry. Apparently, Bernie doesn’t quite have the sway over the FIA as he would have had Scorpion believe.

And in the blink of an eye, Scorpion disappeared never to be heard from again. At least, we haven’t heard about them buying HRT. It’s a shame because it would have been nice to have a proper American/Canadian effort in the sport to drum up interest with three races between the two countries starting in 2014. Still, Scorpion was probably a better attempt at getting a team on the grid than US F1.

We’ll be here all this week with our F1 preview. Tomorrow is a look at rules changes for this season. On Wednesday, we’ll preview the seasons for each of the drivers and teams. Thursday, we’ll have a collection of predictions and picks from various Formula One bloggers, including yours truly, as well as the first edition of this season’s F1 Power Rankings. And on Friday, you’ll get my list of predictions for the upcoming season.