I’ve never been a Sega guy. I grew up with a classic NES and had Mario rather than Sonic. Even my one friend who did have a Genesis (or Mega Drive, if you’d prefer) didn’t have a Sonic game. (He did have a game on the classic Stallone movie Cliffhanger so maybe game buying wasn’t his parents’ forté.) From there, I got a PS1 so I largely missed out on everything Sonic and Mario Kart related in my youth.

And that created a very real problem when it came to reviewing Sonic & All-Stars Racing Transformed. It was described as fan service for long-time Sega and Sonic the Hedgehog fans and a Mario Kart clone. Well, I can’t exactly evaluate a game based on that when the Sega game I had the most playing time with was ATP Tour Championship Tennis.

Looking at SASRT (God, that’s a terrible acronym. That’s what happens when you make a game with an obscenely long and ridiculous title.) from a racing game enthusiasts perspective didn’t give me much cause for hope. After all, saying that Sega would only put out an exceptional Sonic game would omit the existence of Sonic Free Riders which was so universally panned that it makes Aliens: Colonial Marines look like Skyrim by comparison.

As the name implies, the unique gameplay element to SASRT is transforming vehicles. You start the race as your standard four-wheel racing cart but along the way you’re challenged with flying and boating sections of the track. That could have marked an area where developer Sumo Digital failed spectacularly but I’m pleased to say they didn’t half-ass it.

I went into this fully expecting all the karts to drive the same but they handle differently depending on where you’re driving them. The kart handles like you expect, though with a turning circle the size of Texas. The boat bounces on the water and slides through the turns as you would expect for a speed boat. The airplane has a full range of motion meaning you can pilot up and down rather than being stuck only going left or right. 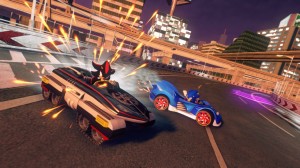 The controls are generally precise. The drifting of the carts isn’t quite to my liking as drifting requires holding the brake/drift button which might work on a controller but doesn’t exactly feel natural on a keyboard. The plane’s controls were jerky and didn’t lend themselves well to precisions adjustments. That made a fly through these translucent rings task nearly impossible.

As for the actual game itself, it has all the usual features that you’d expect from a karting game. There’s your Single Race, Time Trial and Cup modes (called Grand Prix in SASRT). There’s also local co-op for up to four player and online multiplayer should you so choose to sample those modes. I didn’t because most people online are dicks. Still, they can’t be any worse than the 10-year-olds playing COD though I ran into a couple of shits playing ModNation Racers who I gleefully unleashed every weapon in my arsenal on.

The big mode is the World Tour which sees you progress from event to event, earning stars for reaching goals at the various difficulty levels. Collecting stars allow you to unlock the next race, new tracks and new characters. There isn’t really a story that ties World Tour together which seems like a missed opportunity. The genre isn’t exactly conducive to narratives of the calibre of Spec Ops: The Line or The Walking Dead but an attempt to create an overarching story with an end goal like Crash Team Racing or ModNation Racers wouldn’t be heartbreaking.

I’ve read that the courses and characters are references to all sorts of classic Sega published games over the years. I can’t personally confirm the accuracy of that statement for reasons already stated. At least, I haven’t unlocked a tennis stadium or John McEnroe so maybe my one opportunity to confirm Sega nostalgia is waiting for me to find it, though I’m not holding my breath.

What I can say is that Sumo Digital have done a good job of putting together the courses and cars. Very few karts look the same (they’re a bit limited in variety of boats and planes but that’s the nature of functional aero and hydrodynamics). The cars also have different specs meaning that some have a higher top speed or quicker acceleration while those lacking the top end might have better handling or boost capabilities. 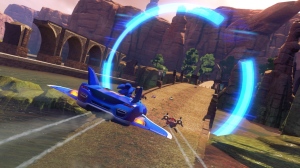 The tracks all look and drive unique from each other. The track design is generally lacking tight turns and challenging rhythm sections but make up for that with sections requiring you to change your driving style as you change vehicle types.

The best tracks, though, are the ones that have a route that changes during the race. Some of the tracks actually change the layout and vehicles you use to navigate them during the race. The first track I played was designed so that the first two laps started in karts but crossing the line to start the third and final lap dropped you into the water in your boat. Another track has its long boat section replaced by a flying section. Not every track has it but it’s nice to have the rug pulled out from underneath you every now and then.

The visuals and audio are good enough to get the job done. It’s not like they’re mind-blowingly awesome but you don’t expect that from a karting game whose titular character is the star of a platformer. The graphics and sound are cartoonish but in a good platformer way. I didn’t expect anything else going in nor did I want anything else.

Seeing as I played the PC port, I think it’s worth mentioning that this isn’t the best PC port ever. Any serious options changes have to be done before the game launches like graphics and control changes. There isn’t a lot to change in the graphics menu but keys are all rebindable. I’ve played PC ports with fewer options but this definitely has to be on the lower end of available options.

I went into this expecting something in the range of Sonic Free Riders to F1 Race Stars in terms of quality and depth. I was quite pleasantly surprised to find that there was a massive game in terms of the number of karts, tracks and race types for you to play. There is definitely plenty of hours to be sunk into this one should you so choose.

If you’re a Sonic the Hedgehog or Sega games fan, chances are that you’ve already picked this up on your platform of choice. If you haven’t and like to play karting games, consider this my full endorsement to buy it.

If you’re just a karting game fan, you can definitely do worse. I have with the likes of F1 Race Stars (even if I did like the environments and more technical driving style more, that doesn’t make it better than SASRT) and Death Rally. This is a good game and for the $30 price tag, it’s worth laying your money down. It’s definitely the most fun I’ve had playing a karting game since MNR.

Sonic & All-Stars Racing Transformed was reviewed on PC but is also available on PlayStation 3, Xbox 360, Wii U, PlayStation Vita and Nintendo 3DS. Your impressions of the game may differ depending on the platform played on, your PC specs and the controller used.