I recently said that I was going to get into reviewing more independent games on the blog instead of just the big releases. With indie games gaining a bigger foothold in the market thanks to Kickstarter and online distribution, it seemed like a good idea to examine the world of independent games. Let’s start that today with a slightly belated review of roguelike space sim FTL.

The premise of FTL is fairly simple. You command a Federation ship that has to navigate across eight sectors (and at least five star systems in each sector) in order to return intelligence to the Federation fleet. That sounds fairly easy but you have a fleet of Rebel ships in pursuit trying to stop you and you will encounter pirates also intent upon doing you harm.

The majority of the game will be spent in combat. What in most games be shooting and evading is much more tactical in FTL. Like something out of an episode of Star Trek or the old Star Wars: X-Wing and Tie Fighter games, you shunt power around to various ship systems. You can take power from life support and the medical bay to boost shields or engine power. Similarly, you can move your crew around to boost systems and repair damage. That can leave you in situations where you have the choice to pull a crew member off speeding up weapons charging for repairing life support or do you risk suffocating your crew to destroy the enemy ship faster so they have less chances to damage the rest of the ship.

Running your ship isn’t the only tactical part of the game. Attacking the enemy includes an element of strategy. You can target individual enemy systems like they target yours. You can damage their weapons system to buy you some time or you can take out the shield generator to leave them vulnerable to a barrage of fire.

When you’re not jumping from star system to star system and engaging in combat, there are choices to be made by you as ship’s captain. For example, you will occasionally run into a ship in distress and can choose to rescue it from its predicament or move on. Sometimes you’re rewarded with currency (called scrap) but sometimes IT’S A TRAP!

As you progress, you earn scrap which you use to upgrade your ship, buy fuel to travel between star systems and hire crew. What you spend your money on is critical to your continued survival. I’ve had to sell off weapons and cargo that could be useful in a fight to repair the hull so I don’t get vaporized 30 seconds into the next fight.

When I say off the top that the game is “roguelike,” I mean that this is an RPG with randomized levels, two-dimensional graphic and permanent death. Unlike most roguelike games, FTL has real-time combat rather than turn-based, though there is a very welcome pause function that gives you time to assess the situation.

Permadeath is a very big deal in this game because it’s hard. The easy difficulty is hard. You go into it expecting it to coast through it with only a couple of near-death experiences. No, I nearly died in the first five minutes and didn’t make it a half-hour in my first playthrough. Some of the difficulty comes through the random generation of levels but it wouldn’t be easy even if you knew everything that was around the corner. 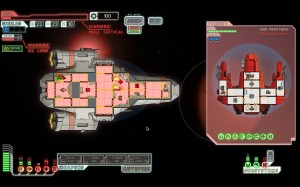 And you will die. Not just once or twice before you get to the end. You will die repeatedly. You could get blown up in battle or your crew overrun by intruders. Hell, you could suffocate because you forget to close an airlock. (I didn’t do that but game damn close to venting all the oxygen to put out a series of fires so the crew could get to life support and fix it.)

Death isn’t that frustrating. It’s not exactly fun and you don’t have to like it. It’s part of the game. You just add a letter to the ship’s name, drop into your captain’s chair order up another tea, earl grey, hot, and try to get that intel back to the Federation. Learning from your mistakes and altering your strategy to get farther is just as much a part of the game as combat and resource management. Fortunately, a full playthrough won’t take much longer than an hour so you don’t have to worry too much about sinking a very long stretch of time in only to have one false turn make it all for naught.

From the screenshots above, you can tell that the graphics aren’t going to win any awards. But graphics aren’t what FTL is about. It’s about the gameplay. The user interface is functional which is all that matters. You can quickly and easily figure out what’s happening and react accordingly. The graphics do their job and don’t let you down.

The audio was surprisingly good for a little indie game with one sound guy. Ben Prunty was in charge of the sound effects and the soundtrack. The sound effects are good but you don’t expect Ben Burtt for $10. The soundtrack, however, is very, very good. Prunty’s synth soundtrack is beautiful. It’s calming and melodic. The battle music relies on percussion to give combat a fight to the death feel. 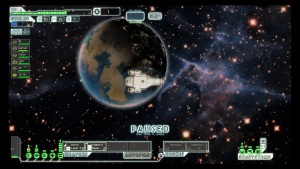 FTL is looks deceptively simple but there’s some depth to it. You’ll never have the same experience twice. Combine random level generation with the many choices to make along the way and you have a lot of replay value for $10. If you’re looking for a low-cost RPG / space sim / indie game, FTL is definitely for you.

FTL: Faster Than Light was reviewed on Windows PC but is also available for Mac and Linux operating systems.

One thought on “FTL: Faster Than Light Review (or Second Star to the Right and Straight on ‘Til Morning)”