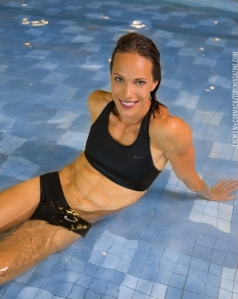 As I was going through possible choices to lead off today’s linkdump, I realized that I hadn’t featured a Canadian Olympian. So let’s kick this post off with Canadian heptathlete and hurdler Jessica Zelinka.

Good news! No, great news! The Curiosity rover landed safely on Mars! (io9) So can we send a man to Mars soon?

Mitt Romney has a plan to cut taxes. Actually, no, he doesn’t have a plan. He just says he’ll cut taxes. He has no idea what he’s doing or will do. (Bloomberg)

Not to dwell or anything but the Canadian women’s national team got royally hosed by an incompetent Norwegian official in the Olympic semi-final against the US. (Toronto Star)

After the jump, more on the soccer controversy, interesting Olympic stories and a Batman version of Call Me Maybe.

It turns out that US forward Abby Wambach kept hounding the ref until she made the nearly unheard of six-second violation call. What a cheap way to play Abby. And to think little girls look up to a whiner like you. You’re no better than the scads of divers that populate top-level soccer. (Yahoo Sports)

To make matters worse, FIFA may suspend Canadian players who complained about the officiating for the bronze medal match. (National Post)

The New York Times put all the men’s 100m medalists into a giant hypothetical race. I wonder if the guy who just won the gold medal with a new Olympic record is the fastest Olympic sprinter ever. (New York Times)

So you’re an Olympic champion. Apart from injury, what could possibly stop you from defending your title? Well, your country forgetting to sign you up for your event will stop you. (Fourth-Place Medal)

Ever wonder what the deal is with all the weird tape Olympians are wearing? Well someone smarter than me has been looking into it. (Mental Floss)

Suspended NASCAR driver AJ Allmendinger is finally speaking out about his positive drug test. It wasn’t an energy drink that caused it but accidentally ingested Adderall. (ESPN)

Bob’s Burgers is doing a crossover episode with Archer. Two of the internet’s favourite cartoons getting together might be too much awesomeness to handle. (SplitSider)

Madden 13 will launch with Nintendo’s Wii U. Despite the fact that the Wii U is technically more powerful than the PS3 and 360, the game won’t have all the same gadgets as the other consoles. (Kotaku)

I have to stop posting Call Me Maybe parodies. But one last time, here’s another one. This one is about Batman.

Next Wednesday would be Julia Child’s 100th birthday. Here’s a musical tribute to a legend in cooking TV and French cooking. No Carly Rae Jepsen here but some Guns ‘N’ Roses instead. And I think she’s making a croquembouche at 0:31 and 0:36.

One thought on “Wednesday Link-Off: And The Games Roll On”