For the first time since 2010, we’re back with our trademark Formula One race recap and analysis posts. And what a time to bring these back because the running order has been mixed up once again. One thing that hadn’t changed when the checkered flag fell was that the two teams at the front are McLaren and Red Bull. The British squad won the day today with Jenson Button leading the way home.

The two boys from McLaren pulled off a first for them since the pairing of Lewis Hamilton and Jenson Button. The Macca drivers were able to lockout the front row for the first time with Hamilton leading the way from Button. However, the 2008 World Drivers’ Champion couldn’t hold the lead into the first corner. Instead, it was Button who took the lead into turn one and didn’t look back as he lead all but a pair of laps on the exchange of pit stops en route to a win in the first win of the season.

After getting the lead, Button stretched out to a lead over the rest of the field. Behind him, it was near chaos. Michael Schumacher jumped from 4th to 3rd thanks to a slow start for Romain Grosjean but it wouldn’t be long before both ran into race ending trouble. On Lap 3, Grosjean was passed by Pastor Maldonado who hit and destroyed the right-front suspension of the Frenchman’s Lotus. On Lap 11, Seven Time’s gearbox failed which ended his race prematurely. A gearbox failure also caught out his Mercedes teammate Nico Rosberg. It wasn’t until the 58th and final lap that Rosberg’s gearbox got stuck in 4th gear which caused Nico to limp home, dropping four spots from 8th to 12th.

The troubles for Grosjean and the two Mercedes benefited twice World Champion Sebastian Vettel the most. He got to third after Schumacher’s retirement and was able to leap Hamilton for second thanks to an exchange of pit stops which was mixed up by a safety car due to Vitaly Petrov’s broken car on the front straight. Mark Webber was also able to move up to 4th thanks to the safety car.

The race ended in complete chaos. It started with Pastor Maldonado losing the back end in Turn 5 and putting the car in the wall. Then we had Rosberg’s aforementioned gearbox failure. This caused a four-way fight for 8th through 11th that ended with all four cars covered by less than four-tenths of a second at the finish with Sergio Perez leading home Australia’s Daniel Ricciardo, Paul di Resta and JE Vergne.

Finishing elsewhere in the points were Fernando Alonso who finished 5th up from a 12th place start. Kamui Kobayashi and Kimi Raikkonen used the crazy final lap to make up three places each finishing 6th and 7th, respectively. 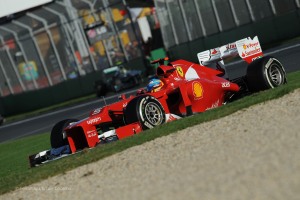 There are interesting rumours abound regarding the new Formula One commercial agreement with the teams, called the Concorde Agreement, which will start in the 2013 season. The first rumour deals with the teams who will get a special share of the prize fund. Currently, Ferrari gets a special share (estimated to be 2.5%) of the prize fund before distribution to the teams. That prize fund is equal to 50% of all of F1’s commercial earnings for a year.

The latest rumour has Red Bull Racing, which previously resigned from the Formula One Teams Association (FOTA), getting their own special share of the prize fund. The rumour is that they will also get 2.5% of the total fund. Last season, it was reported that 2.5% of the prize fund equalled about $17 million.

The other rumour, that Sky Sports is reporting, is that Ferrari’s individual Concorde Agreement negotiations, as it is also not a FOTA member, could end with Ferrari getting an ownership stake in the Formula One Group which is the commercial rights holder of F1. Whether share would be transferred or sold to Ferrari or if new shares in FOG would be issued isn’t known. However, this would benefit Ferrari. With Ferrari already getting more of the prize fund than any other team, you’d have to think that their share of any F1 Group profits would blow every other team out of the water when it comes to earnings from the sport.

Speaking of Sky Sports, they’re the new live race broadcaster for Formula One in England. In order to cut costs, the BBC is sharing the broadcast rights with Sky. The Rupert Murdoch owned broadcaster launched a pay TV channel (similar to a digital cable-only channel here in Canada) called Sky F1. In order to launch this channel, Sky poached a number of BBC TV and radio commentators. The BBC restocked their roster by hiring on Ben Edwards as the play-by-play man to pair with David Coulthard on TV as Martin Brundle’s replacement. James Allen and ex-Toro Rosso driver Jaime Alguersuari pair up on radio’s BBC Radio Five Live replacing the new Sky F1 commentary team of David Croft and Anthony Davidson who will pair with Brundle in a three-man booth.

I got a chance to listen to the BBC crew as they are still the official world feed commentary crew. The pair of Ben and David got off to a great start. Coulthard sounds much more authoritative with a proper play-by-play commentator as his partner. Edwards is often considered the best play-by-play racing announcer in Britain but was relegated to working on British Touring Cars for the last few years and will definitely shoot to worldwide fame with his work with BBC F1. He definitely did nothing to earn the hatred that Jonathan Legard got from the start of his BBC stint. The most interesting addition is new technical analyst Gary Anderson who was a technical director with Jordan, Stewart and Jaguar. He was called on a few times to add his input. There wasn’t much new that he added except for what he would’ve done about a vibrating rear-wing endplate on Kobayashi’s car.

Still, it’s interesting that the BBC is going a bit more American-style with their broadcast crew of play-by-play man, ex-driver analyst and ex-mechanic calling the action. I like how well it works on Speed Channel and since TSN has blocked out the live Speed broadcasts, it’s still nice to get those different perspectives somewhere. 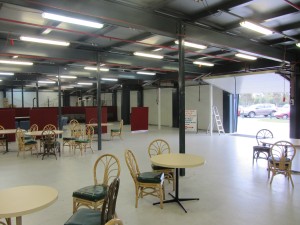 Speaking of the BBC and Ben Edwards, Ben had mentioned that the pit garage complex was the only permanent portion of the track apart from the roads. So what do Formula One garages on public roads become during the rest of the year? Ben mentioned that the upstairs portion of the garages are used as netball courts during the other 51 weeks of the year. As I saw in a recent visit to Albert Park in Melbourne last fall, the downstairs becomes a low-rent gym as my professionally amateurish photography shows you. 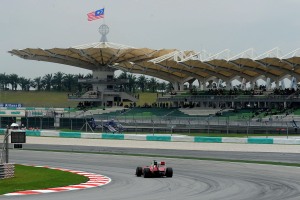 The next round of the 2012 Formula One World Championship comes to us next Sunday. It’s the Malaysian Grand Prix at the Sepang International Circuit which makes the next race the first time we go to one of the many Herman Tilke designed tracks. In fact, of the 20 Grands Prix on the schedule, 9 were designed from scratch by Tilke with another 6 having some level of redesign work also done by Tilke. That means that three-quarters of the schedule is on a Herman Tilke track.

With that much of the calendar under the influence of Tilke, this race will be the first big test of the season. The Aussie GP gave us a small idea of what’s to come this season but the Albert Park circuit is fairly unique in F1. Sepang will be a better indication of who has gotten the formula right to begin the season and will have an advantage until we get the first set of car updates for the start of the European portion of the season.