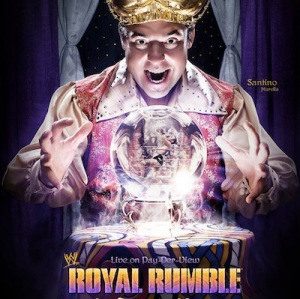 Every year, the Road To WrestleMania starts with the battle for a world title shot in the Royal Rumble. In a return to tradition, 30 men did battle in the over-the-top-rope battle royal for the honour of main eventing WrestleMania. Not to be overshadowed were two world title matches which helped set the stage for the biggest pay-per-view of the year.

Triple Threat Steel Cage Match for the World Heavyweight Championship – Daniel Bryan defeats Big Show and Mark Henry
This match had the potential to be very fun. You had a David vs. Goliath(s) angle as well as a good big man match which Henry and Show are capable of. Instead, Show got most of the spotlight. Henry did very little. Bryan played smart and ran for an exit whenever he had a chance (unless a pin or submission opportunity presented itself). The finish was at least unique as Show tried to hold on to Bryan to keep him from hitting the floor after climbing out of the cage only for him to slip out of his grasp and win. Mind you, the match length for a triple threat steel cage title match almost makes me wonder if that was a botch.

The problem with the match is that the announce team keep running him down. I know Bryan is turning heel by sticking to something resembling the ROH Code of Honor but that isn’t a reason for the commentary team to make Bryan sound like an idiot. Booker T was trying his damnedest to make it seem as though Byran wasn’t a nerd or a virgin. Hell, he was the only member of the commentary team who seemed to know it’s hard to say “I love you.” Bonus points for Booker but Cole and Lawler pretty much ruined this match.
Rating: 6.5/10

8-Diva Tag Team Match – Beth Phoenix, Natalya and the Bella Twins defeat Kelly Kelly, Eve Torres, Alicia Fox and Tamina
This match wasn’t announced ahead of time but you figured that an extra match was coming to fill out the PPV after the short opening match. And you have to figure that the Divas’ costume designer ordered in too much turquoise material because all the heels were wearing teal. And, naturally, it appeared as though the costume department ran out of material by the time they got around to Kelly Kelly’s ring wear.

The match was good for the 45 seconds when Natalya and Tamina were in the ring. Beth Phoenix tried to carry Eve through their part of the match but you can only carry someone so much. Kelly also had the highlight of the match with a splash off the top rope onto the other seven women who were brawling outside the ring. The finish was my favourite part of the match with Phoenix giving one of the Bellas an excessively hard blind tag and hitting the Glam Slam on Kelly for the win. I thought this was a popcorn match but there was one more still to come… And this one was definitely better.
Rating: 5/10

John Cena and Kane fight to a Double Count-Out
The story heading into this match basically said that we weren’t in for a five-star match. A convoluted story about Kane laying waste to Cena’s friend Zack Ryder in an effort to make Cena embrace hate got us to a singles match at a pay-per-view.

Anyway, Kane dominated this match for the most part with the exception of a few moments where Cena was in charge. So much for embracing the hate… I don’t know why Cena has to embrace any hate because he’s already a heel as far as the audience over the age of 10 is concerned. When John Cena finally hit the fourth of his five moves of doom (the five knuckle shuffle), then things went to the floor where the match resulted in a count out. Then there was a post-match demolition of Cena and buddy Zack Ryder. That at least provided more action than the match itself.

I’m not upset about the finish being a double count-out because I was expecting Cena to go over clean or by DQ after Kane lays waste to him and everyone within sight. He also can’t get in the title picture because he’s doing battle with The Rock at WrestleMania. So a two-month feud with Kane would tide him over until he picks back up with Dwayne… And then feuds with Zack Ryder post-Mania. Still, this match wasn’t anything to write home about.
Rating: 6/10

“The Funkasaurus” Brodus Clay defeats Drew McIntyre
This is a vintage popcorn match. A short, unannounced filler match that lasted all of two minutes. Clay dominated this match and made a mockery of my love of wrestling. Clay’s gimmick is a fat white guy with a neck beard trying to dance like a black guy but looking like a fat white guy. I know it’s a comedy act and his dancing wasn’t entirely unenjoyable but couldn’t they have made the opening title match longer rather than have this one?
Rating: 3.5/10

WWE Title Match with Special Guest Referee EVP Talent Relations and Interim Raw GM John Laurinaitis – CM Punk defeats Dolph Ziggler
The story heading into this match was the Johnny Ace was expected to screw Punk over but the interim GM relegated himself to a post outside the ring and let a regular ref call the action. When the match got underway, Punk and Ziggler traded control of the match with Punk enjoying more time in charge. This worked for the better because the Zig Zag man sells better than anyone in the game right now. Basically, he made Punk look like a million bucks. He was also good in a mid-match exchange of finisher attempts and counters which was a good false finish.

And then the match made a hard turn for the worse. There was a ref bump and the destruction of Dolph Ziggler. While Johnny Ace checked on the match official, Punk scored  a tap-out and two would-be pinfalls that went officially unrecognized. In other words, Ziggler was made to look like Punk’s bitch. Sure Zig Zag tried a comeback but it the three missed falls don’t make anyone look good when the eventual finish was Punk winning with the GTS for a pinfall.

It’s funny that after shitting all over the Daniel Bryan match, Cole does an exemplary job of giving Laurinaitis a fair shake. While Lawler and Booker both want Johnny Ace fired, Cole called Laurinaitis’ involvement right down the middle. Since he’s technically supposed to be a heel authority figure, Cole’s fulfilling his role of heel commentator. The thing is that Ace called this one down the middle while furthering his feud with Punk. I’m beginning to wonder if Punk is the real heel of this feud. Either way, Johnny is probably the best character on Raw right now and proved it at the Rumble. But a good match was ruined by the domination of Ziggler by Punk while the ref was down.
Rating 6.5/10

Royal Rumble Match – Sheamus defeats 29 other wrestlers
The match started with The Miz and former protegé Alex Riley which really set the tone for the first half of the match. The first 20 or so entrants were mostly mid-carders and curtain jerkers. All three ringside broadcasters entered the match in the first 20. We also had nostalgia entries in the form of Hacksaw Jim Duggan and the Road Dogg. In the case of the gimmick entries, most were eliminated by Cody Rhodes who was definitely booked to get a big heel rub from this match.

It wasn’t until after 20 that we had the contenders show up. Sure, The Miz and Cody Rhodes lasted most of the match from #1 and #4 but don’t tell the announcers that they were a threat to go all the way. Anyway, the upper-mid-card and main event guys finally started arriving late in the going. Based on the booking of the early part of the match and what the announcers were saying, we wouldn’t actually see the winner until that last ten.

Big names kept coming in while other got unceremoniously dumped. Rhodes, Miz and Dolph Ziggler who should’ve been booked to look strong on elimination were unceremoniously dumped. Wade Barrett was jobbed out to Randy Orton as a payoff to their feud. The final portion of the match just screamed by as folks came and went too fast for anyone to keep track of. It was almost like it was someone’s first time booking a Rumble match. Not long after #30 came out, we were left with a final four of Big Show, Orton, Sheamus and Chris Jericho. And it was less than a minute after that before Show and Orton were dumped leaving Sheamus and Y2J.

The long finish between Jericho and Sheamus was almost like a singles match in itself. The two went back and forth trading power moves, finishers and counters. Jericho skinned the cat a few times to avoid elimination. The last few weeks of Raw and this match built to a Jericho win. Instead, it was Sheamus who overpowered Y2J for the win and the title shot at WrestleMania.

I can’t say I’m happy about how this turned out. I couldn’t have told you when Shaemus came in during the match or who he eliminated upon my first viewing of it. Jericho made an impact in the match. Sheamus just sort of showed up in the middle and won despite the old-school NWA crowd backing the wrestler. And where were the big names? Cena being out because of his earlier beating makes sense. But where was Henry, Kane, Funkasaurus and half the damn roster? Too much potential was wasted on gimmick entrants and there wasn’t much drama until the match was down to the last two. At least they put some effort into this which is more than I can say about the powers that be backstage.
Rating: 6/10

I’d like to say there’s a positive to come out of this pay-per-view but there isn’t much to pull from. Funkasaurus is an entertaining act. Sure, he wrestled a PPV squash match but half the matches at the first WrestleMania were too. I liked the finish to the Rumble match itself. Amazing how entertaining it is when two people are allowed to go out there and put on a wrestling match. It’s such a novel concept. Unfortunately, that was something the WWE didn’t realize when booking the Rumble. Shoddy booking really ruined what could’ve been a very good night.