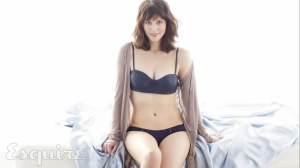 It’s a good weekend if you’re feeling a little retro. For those into something a bit lighter, there’s the Footloose remake starring Kenny Wormald and Julianne Hough. Meanwhile on the other end of the spectrum is the paranoia filled sci-fi horror flick prequel The Thing starring Mary Elizabeth Winstead! It’s also quite appropriate to start off with something from her latest photoshoot with Esquire.

After the jump, the red band trailer for American Reunion, NBC’s Community is one of the smarter comedies you’re not watching, Drive is making people do bizarre things, The Thing: The Musical and a Voltron related short film hits the net!

Starting it all off with an interview with Mary Elizabeth Winstead. Turns out she enjoys using the flamethrower. Bonus cool points right there. (Cinema Blend)

Our favourite characters from the American Pie franchise are still jerkin’ off 10 years later. Have a look at the red band trailer for American Reunion. (MSN)

In this week’s edition of Commentary Commentary, there are 39 things we can learn from the commentary feature in the Cloverfield DVD. (Film School Rejects)

This might be a bit of a long entry but if you’re looking for a good reason to watch Community, here’s a nice write up about how smart the show is as it pushes the creative boundaries on a regular basis. Spoilers beware, but it’s a good read. (Slashfilm)

Only in America. A woman in Michigan is suing the studio FilmDistrict for misleading her to believe the film Drive was like the Fast and Furious films. She thought the film was a bore and that it was anti-Semitic. Clearly she disagrees with 93% of the movie critics out there. (Moviefone)

The movie Drive must have quite the influence on the public, because the few that saw the film are reacting to it… though not in ways people expect. For example, a man was so inspired by the movie, he decided to throw hot dogs at Tiger Woods. (Entertainment Weekly)

If you missed it earlier this week, here’s the teaser trailer for The Avengers. (Apple)

Well this is depressing news. In order for the film John Carter to land itself a sequel, the film needs to make $700 million! Kind of a hard feat for something being released in March… (Slashfilm)

If you liked the Cougar Town/Community random cameo-crossover last season, expect more to come! Well, not exactly on Community, but the cast of Cougar Town is expected to be making random appearances on other shows. Now that is fun guerrilla marketing! So far 13 shows are on board and perhaps you can expect more to join the list! (USA Today)

This isn’t a joke. Steven Segal is sworn in to Texas Border Patrol. Perfect time for him to use the line “I am the law” in his reality series? (Movieline)

Since this weekend marks the release of the prequel to The Thing titled… The Thing, many sci-fi horror fanboys would be flocking to theatres to see it. Before you do, perhaps you want a refresher on how the original film went. This time it’s even better, instead of going through the entire movie, here’s a nice summary of it in song! Spoilers beware.

If the previews and writeups earlier weren’t enough to wet your appetites for the upcoming release of the video game Batman: Arkham City, here’s the new trailer to tie you over the next few days.

VOLTRON! Well… this will be the closest thing we’ll get to a live-action movie… at least for a while.