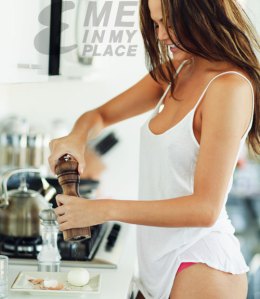 Let’s kick off these links with Chrissy Teigen who is working her magic near the stove. Did you know that she has a food blog?

As often as we link articles about how much Grantland sucks, it does occasionally come through. For example, Malcolm Gladwell finally gets his first Grantland story up about how owning an NBA team isn’t about making money so the lockout is basically pointless. (Grantland)

Is the middle class dead or is it still possible to save them? (The Atlantic)

I’m sure you’ve seen the epic brawl between Georgetown and the Chinese professional team by now. But have you seen the world’s best breakdown of the fight and its winners and losers? (SB Nation)

After the jump, hockey fight club for kids, a Dell vs. HP slap fight and Healthy Meal Time.

We’re only a month-and-a-half from the start of the 2011-2012 NHL season but there are still some decent free agents still on the market. (Down Goes Brown)

Deadspin called this a classic article but damned if I can remember reading it the first time around. It’s about a special type of hockey school that specializes in fighting. (Deadspin)

We all know that Joe Namath love Suzy Kolber but he’s not surprisingly not a one woman man. He also wants you to know that he really loves cheerleaders. (Last Angry Fan)

Speaking of lovely ladies, don’t mention her looks to Hope Solo. When Dan Patrick tried to ask Solo about her feelings on how sexuality seems to be the biggest selling point of women’s sports, she deflected and dodged as best she could. (Off The Bench)

Michael Dell is taking potshots at HP on Twitter. (CNET) My question is why HP bought Palm only to get out of smartphones, Palm’s domain, and tablets, using Palm’s WebOS, only 18 months later.

How big has Epic Meal Time gotten? Their frontman was just interviewed by Forbes in a series about making money on YouTube. (Forbes)

Remember the Simpsons episode where Homer and Ned go to Vegas? Ever notice how it’s remarkably similar to The Hangover? (Next Round)

After the hilarious Gérard Depardieu airplane pissing incident, why don’t we take a look at nine other cases of bad airplane behaviour by celebrities. (DJ Mick)

We can’t embed this many videos so we’ll just link to them instead. It’s a collection of 18 game show fails. (COED Magazine)

But we can embed this video. It’s an Epic Meal Time parody featuring healthy food.