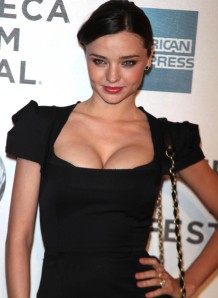 Let’s kick off today’s linkdump with Miranda Kerr. Did you know that she had a kid in January? I don’t think you can tell.

UFC 129 will be Toronto’s first UFC show and it’ll be at SkyDome to make it the UFC’s biggest show ever. But since Toronto is really a hockey town, here’s a guide to the UFC for hockey fans. (Down Goes Brown)

Have you been on Hockey Night In Canada’s site lately? They’ve gone all in on social media integration for their new Hockey Night Pulse game companion thing. (Pension Plan Puppets)

And speaking of social media, Klout have released their ratings of the top athletes on Twitter. (CNBC)

After the jump, the NFL lockout is over, a royal wedding primer and the most random Walker, Texas Ranger clip ever.

Speaking of the NFL, the draft starts tomorrow. The LA Times got 32 beat writers to mock draft the first round as their teams. (Los Angeles Times)

And in news to get the NFL mocked, Cowboys Stadium is hosting women’s bowling in June. Jerry Jones never met a dollar he didn’t like. So when does he do WrestleMania? (Off The Bench)

A story on The Big Lead about Oakland’s Trevor Cahill being a Star Wars fan turned into a 500 comment debate over the best movie trilogy. Pretty fun read… If only for the comments. (The Big Lead)

Friday is the Royal Wedding… I’m not particularly bothered but here’s your primer for the big day. (The Smoking Jacket)

Remember when all the celebs were going to rehab? Well the new fad is claiming bipolar disorder. (ABC News)

The Russians would like you know that none of their astronauts have had sex in space… I don’t believe them. (Yahoo/AFP)

The newest thing in animated GIFs? Still images where just part of the picture is animated. (Fast Company)

If you still prefer your images as classic JPEGs, then check out these funny church signs. (Uproxx)

Did you know that Sega licensed their Genesis technology to just about anyone willing to pay up? It lead to more than a few interesting creations. (Kotaku)

I prefer the original Iron Chef but this compilation of Iron Chef America’s chairman guy introducing the secret ingredients isn’t too bad either.

And just for fun, here are more Mortal Kombat secret character tryout fatalities. There are some very good ones in here.