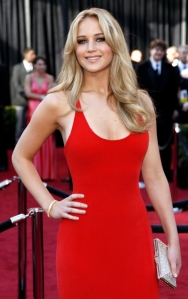 Jennifer Lawrence may have not won an Oscar for best actress but she was definitely winning on Sunday night.

The folks at GQ were planning on running this profile of Charlie Sheen in their April issue. With all that’s happened with him over the last few days, they’ve released the profile early online. That’s winning. (GQ)

Gordon Bombay has some advice for Charlie Sheen. Bombay did get a DUI in ’92 so he has some experience. That’s how he ended up coaching District 5. (Tauntr)

Want an early front-runner to win the potential NFL lockout? I’d take the owners. Some have enough money to weather a two-year lockout. (CNN Money)

It’s not quite the Mutiny on the Bounty but the Detroit Pistons appeared to mutiny against coach John Kuester. Here’s how it went down. (Detroit Free Press)

This article is a little late but Down Goes Brown looks at the NHL’s trade hotline. Absolutely hilarious. (National Post)

Iran is threatening to boycott the 2012 London Olympics because of the logo. It’s not that it sucks (which it does) but it’s that it resembles the word “zion” and they don’t like that. (With Leather)

As much as I love Alfa’s 4C concept, the real star of the Geneva Motor Show is VW’s bus concept called the Bulli. (Top Gear)

There’s a new study about video game violence and violent people. This one is a good one for video game fans because it doesn’t blame games. (Kotaku)

Bad news for most people: Dumbasses on both sides of the borders are trying to shut down IsoHunt. (Globe and Mail)

Since I finally saw Up In The Air the other day, here’s a story about George Clooney’s activism about Sudan. (Newsweek)

Let’s wrap up with this list of nine movie characters that made good movies awful. George Lucas characters occupy four spots on the list. (Guyism)

Charlie Sheen is winning in this “I’m Winning” mashup.

Here’s a funny Jimmy Kimmel skit spoofing workout program ads. As an added bonus, it includes some of Hollywood’s hottest starlets. Pay close attention to the… effort put forth by Minka Kelly and Jessica Biel.

And keeping with the theme of winning, here’s the space shuttle launch viewed from an airplane.