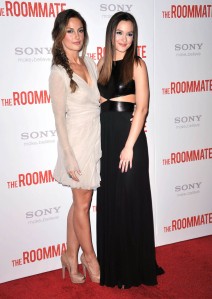 Since I put these links together at the last minute, I’m hoping Minka Kelly and Leighton Meester will make up for any omissions.

Given the great run the Maple Leafs are having recently, here’s a good list to cheer up Leafs fans. It’s the ten worst Leafs skaters since the lockout. (Pension Plan Puppets) At least there’s only one current Leaf on the list.

It’s no secret that I’m an old school wrestling fan. With the Royal Rumble this Sunday, here’s a look at the five best Royal Rumble moments. They definitely got #1 right. (Camel Clutch Blog)

After the jump, Kim Kardashian takes over, the story behind the Oregon Trail and Samuel L. Jackson as a hockey coach.

Lot’s of folks are talking about Jay Cutler’s heart and desire after the NFC Championship game. But Dashiell Bennett says that questioning Jay Cutler isn’t wrong because of not having adequate information but because it shows a problem with football’s culture. (Business Insider)

This is a bit of an old link but former Texas Tech coach Mike Leach’s lawsuit was denied by a Texas appeals court. But the judges of the appeal court all had something in common that would make you think they ruled the way they rules. (Sports By Brooks)

In the unsurprising survey results of the day, a new study says that 8% of sports fans leave games drunk. Been there, done that. (CNBC)

Kim Kardashian was recently at a New Jersey Nets game. She sure got a fair amount of attention from the guys in attendance. (The Basketball Jones)

Jackie sent me this link so he’s responsible for my bad jokes. There’s a new board game out in Poland that’s about Poland when it was a communist country. In Soviet Poland, game plays you. I couldn’t resist. (Toronto Star)

Time for the galleries (or reasonable facsimiles thereof). On the heels of last night’s State of the Union address, here’s a look at what presidential quotes would have meant if they were about sports. (Sports Pickle)

Since we mentioned two of the Kardashian sisters earlier, let’s include the third. Khloe Kardashian makes an appearance at #3 on AskMen’s 10 least desirable women of 2011. (Ask Men)

It’s taboo to say that you’re an atheist but here are 15 celebrities who are confirmed atheists. (Guyism) Anyone care that I’m an atheist? No? Shoulda guessed…

Nikolai Kulemin kinda got his ass kicked the other night. Maybe Brian Burke’s next step with this team is to hire Jules Winfield as coach.

Is it safe to say this is the greatest mini putt shots of all-time?