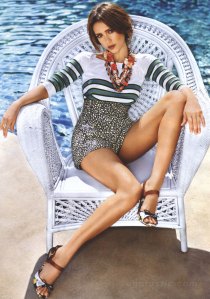 It’s Christmas Day!!! To all the Lowdown readers, I hope you’re enjoying the holidays! Despite having an ELO on Christmas Day, there aren’t too many Christmas related links. This will be the last Entertainment Link-Off before the new year, so I’ll see you again in 2011. Now kicking off this entry is Jessica Alba. Forget about the fact that she’s in that movie Little Fockers, go watch her in The Lonely Island’s latest music video instead.

After the jump, Community goes Avengers, some Tron related news, Edgar Wright picks out the 10 most underrated films of the year and a somewhat revamped version of the Star Wars Christmas Special.

The awesomeness of NBC’s Community never ends. Take a look at the fanart featuring the cast as characters from The Avengers. (The Hollywood Reporter)

I’m sure you know here at Lowdown HQ, we love tuning into a weekly fix of Community since it is one of the best comedies out there right now. Here’s a fun list of the top 5 Easter eggs featured on the show this season. (Houston Press)

‘New’ Inception featurette to get those Oscar voters to think of this film when it comes to giving nods in the big categories. (Collider)

So the Spider-Man musical is turning out to be an epic disaster in terms of budget and whatnot. Recently the accidental injury of one of the stunt performers sure didn’t help its prospects. Well who better to tell the story than those folks who do the Taiwanese computer animated coverage. (JoBlo)

So last week it was revealed that 17 minutes of footage for 2001: A Space Odyssey was found. Now Warner Brothers responds with… ‘what footage?’ (Wired)

Tron Legacy is in theatres now and it’s doing decent but not great business at the box office. That won’t stop them from making an animated series that will air in the summer of 2012. It also has a pretty loaded voice cast too. (Box Office Magazine)

While Tron Legacy is not a horrible film, I was somewhat disappointed with the final product. It was indeed visually stunning but I found the pacing a bit off and the screenwriting could use some work as well. That being said it was an entertaining 2 hours. Director Joe Kosinski talks about the filming process, Easter eggs and what changes he would have made to the film. (Collider)

While we’re on the topic of Easter eggs, here are 15 you should look out for while watching Tron Legacy. (io9)

Edgar Wright talks about his favourite moments of 2010 cinema and also gives a list of the top 10 underrated films of the year. I have to say, it’s pretty damn good. (The Playlist)

Not everyone feels the love of Christmas, so here’s the unofficial hater’s guide to Christmas. (JoBlo)

Festivus vs. Chrismukkah! It’s the battle of the pop culture holidays. Click on the link to see who wins. Here at Lowdown HQ, if I get to beat Steve to a pulp every year during the feats of strength, Festivus gets the win in my books. (Zap2it)

Good news for the CW. Dawn Ostroff is expected to leave at the end of the season. Does that mean the network will stop being a bottom feeder? Probably not since the damage is far too extensive now. (Deadline)

Boxing promoter Grant Bovey is offering Mark Wahlberg and Will Smith $1M each to fight each other. The money will go to charities of their choice. Sounds good and all, but we all know the fight will never happen. (Entertainment Weekly)

Scott Pilgrim vs. the World is one of 248 films that is eligible for a run at Best Picture at the Oscars. However that list isn’t saying much since films like Grown Ups and The Bounty Hunter also made the cut… (Slashfilm)

If you missed the earlier trailers for sci-fi flick I Am Number Four, here’s the extended version for your viewing pleasure.

Well I’m sure many people would prefer to not remember that Star Wars Holiday Special (even George Lucas himself), so thanks to some editing work and whatnot, here’s the Star Wars Christmas Special that everyone wanted.

Whoever titled this got it all wrong. When you do a mashup between Home Alone and I Am Legend, it should be Home Alone with Vampires.