The old wedding adage seemed to fit perfectly for yesterday’s British Grand Prix. The irony of that statement is that the marriage at Red Bull is quickly disintegrating. But something old was Silverstone, host of the first ever round of the Formula One World Championship in 1950. Something new is the Arena Circuit layout which was designed for Moto GP and used for this year’s F1 Grand Prix. Something borrowed was Mark Webber’s front wing which was borrowed by Sebastian Vettel. And something blue was Mark Webber’s Red Bull as it streaked across the line as he took his third win of the season.

It was as close to a lights to flag win as you can have from second on the grid. He passed polesitter Vettel heading into turn one from the start lights and never lost the lead from there. It wasn’t a runaway victory, though. Lewis Hamilton found some miraculous pace that allowed him to keep pace with the Red Bull for the first few laps. There was even a safety car for debris (something borrowed from NASCAR) that bunched the field up. Once the fuel loads came down, the McLaren couldn’t keep pace with Webber which allowed the Australian to take his first win in his home away from home country race. 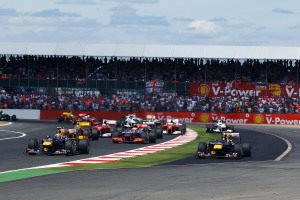 Where was Vettel in all this you might ask. He was forced off the road in turn one by Webber and punctured a tire on a stray piece of debris off the track. Having to nurse a wounded car around almost a whole lap dropped Vettel to the back of the field. He was able to make quick work of the new boys but had to get some help from the safety car to get in position challenge for the points. Using his vastly superior piece of kit, he was able to scythe his way through the field to 7th. It was far better than it could have been for the German but he dropped to 4th in the drivers’ points standings. However, he’s only 24 points back of Hamilton which is a reasonable gap to make up over the final nine races of the season.

Nico Rosberg finished third ahead of Jenson Button. Attrition and penalties allowed Rosberg to move from his fifth place start to a podium finish. Button took advantage of some pit strategy to advance from 14th to 4th. He got a good start thanks to some midfield chaos and used some modified Kobayashi strategy to contend for the podium. He was the last to switch to the hard compound which allowed him to make up ground in an unusual race compared to the usual pit strategy.

One of the more interesting stories of the weekend was Mark Webber’s recovery from his crash at the European Grand Prix. Speed Channel’s Bob Varsha mentioned more than once that Webber’s only injury from his big wreck with Heikki Kovalainen was a bruised big toe. He got that when he kicked the cockpit while getting out of the car. It’s ironic that he was able to defy injury in the spectacular backflip but something as simple as stepping out of the car escaped him.

With pit strategy seeming to have a few more options after Kamui Kobayashi’s strategy trick in Valencia, strategy was flipped on its head again yesterday. Usually, you want to get you pit stop out of the way as soon as you can reenter in clear air. The idea was that the fresh hard tires would be able to out pace the worn soft tires. Because of the cool track temperatures during the race, the soft tires were quicker than the hard tires even well worn. Michael Schumacher was the first of the points contenders to pit and I thought he was looking strong for a top five as a result. However, he fell back after everyone around him stayed out and got by him. It was this strategy that allowed Button to gain as many spots as he did. 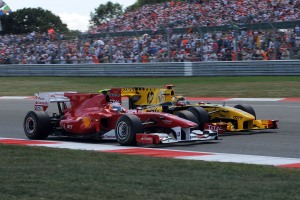 Fernando Alonso has to be wondering what higher power he pissed off in the last few weeks. Two weeks ago at Valencia, he was pinned behind the safety car by Lewis Hamilton who did end up getting a penalty that didn’t harm his race. Alonso ended up finishing 8th in that race. This weekend, he was forced off the road by Robert Kubica while battling for 4th. Alonso got the position and Kubica quickly retired with suspension damage. The race stewards decided, after several laps, that Alonso gained an unfair advantage by going off-road during his pass. Since Kubica was out so he couldn’t be allowed to retake the position, Alonso was told to serve a drive-through penalty. Then the safety car came out and Alonso was forced to wait until the safety car came in to serve the penalty. That dropped him to the tail end of the lead lap and left him with a 14th place finish. Sometimes, you just can’t get any breaks. 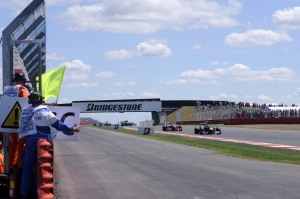 It’s also worth mentioning that the safety car rules changed for this weekend. In order to avoid screwing everyone up like Alonso and Massa were in the last round, the safety car will not be released until it can be released in front of the race leader. Cars are to circulate around the track at an estimate of the pace of the safety car. They will also tweak the activation pit lane exit red light. No idea what that means but I’m pretty sure that the man in charge of it doesn’t either. Mind you, it seemed like Jonathan Legard was also confused by the new rules. He thought the pit lane was closed until all the cars were collected by the safety car but that didn’t seem to be the case.

Mind games seem to be the new order of the day in F1. To ensure that you have that edge on track, you screw with your competitors’ minds off it. Red Bull and McLaren are busy trying to get in each others’ heads. It started with suggestions that McLaren would soon implode. They have a history of this sort of thing with two World Championship calibre drivers in their cars. Senna and Prost went at it in the late 80s and Alonso and Hamilton had their falling out in 2007. Now, it could happen to Hamilton and Button. Two drivers battling for the World Championship probably aren’t likely to be best friends off the track. Mind you, I’ve never considered Button to be a championship calibre driver. He has the driving thing down well, just not the racing part of it.

Meanwhile, suggestions that Red Bull could explode over apparent favouritism of Vettel over Webber. Things seemed rather peachy heading into the weekend but Red Bull seemed to make sure that the weekend didn’t end that way. Both RB6s had a new version of the front wing on their cars this weekend. However, Vettel’s wing had a failure in the final practise session. Rather than fit the last generation of wing to his car, Vettel got the front wing off Webber’s car and proceeded to scamper to pole. Webber was livid with the favouritism of Vettel. In the race, Webber gave Vettel no room in turn one and went on to win the race. After the race, he radioed back to the pit wall, “Not bad for a #2 driver.” I don’t think I’m going out on a limb by suggesting that Red Bull’s biggest threat to their World Championship chances is themselves.

Rubens Barrichello scored his second straight top five finish. I don’t know where the sudden pace of the Williams has come from but I’m not sure anyone else knows either. Part luck and part attrition, I’m sure. His fourth at Valencia was followed up by a fifth at Silverstone. The great strength of Barrichello is his ability to put in clean, consistent laps. He stays out of trouble and seldom puts a wheel wrong. As Jenson Button has proved a few times this season, sometimes that’s all you need to have a good finish.

Last weekend, FIA president Jean Todt visited the Grand-Am and NASCAR races at Daytona. Todt witnessed a decent Daytona Prototype battle and the demolition derby that was the NASCAR Sprint Cup Coke Zero 400. He seemed awful confused by the whole thing. There was close racing in both races. The fans were excited by the action. And there was – GASP! – passing. No wonder why Jean seemed a little unsure of what he was doing there. He saw things he had only read about previously. However, he did borrow the infamous NASCAR debris caution to close the field at the British GP. 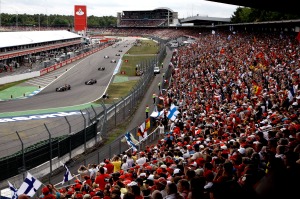 The next round of the 2010 Formula One World Championship is the German Grand Prix from Hockenheim. The Tilke-ization of the circuit has robbed it of some of its character which is something I’m tempted to say about the new Silverstone layout. The stadium section is still there but you’re not going to pass there. The right hander leading into the new section and the hairpin are the only two decent passing sections. Between the hairpin and the stadium are the Herman Tilke special medium-speed corners.

Expect the Red Bulls to be favoured in this round again. Also, expect them to bring more than just two new front wings so nobody has to give their’s up during the weekend. Mercedes will likely make a push to win their home grand prix but a podium should be as good as a victory for them given how this season has gone. McLaren will be the main challenger once again. How close they will be will depend on if they can get the exhaust blown diffuser working. Mind you, they haven’t been too shabby without it.