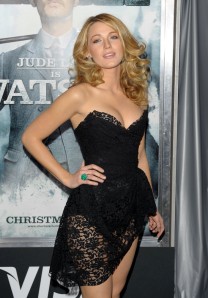 The SLO was off last week for a Tiger Woods themed affair. To make up for that, here’s our favourite gal Blake Lively.

Our web address isn’t eye-poppingly pretty but it isn’t anywhere near as bad as some of the trainwrecks out there on the net. (Independent Sources)

I don’t think we’re on Facebook but neither were the characters from Star Wars. But what would it have been like if they had been on Facebook. (College Humor)

Let’s close the opening tech theme by mentioning that there are more tweets than people now. To use a description that Jim Chapman taught me, that’s a non-story. (Mashable)

After the jump, some decade retrospective lists, bloopers and a new way to handle bullies.

Who doesn’t love decade lists? We were thinking of doing some ourselves but they won’t top the Top 50 catchphrases of the 2000s. (Bro Bible)

Tired of dealing with the schoolyard bully? Hit him with the flying headscissors. (Lion’s Den U)

Disturbing mental imagery of the day: Brett Favre has a tattoo… On his ass. (Star Tribune)

Kobe Bryant is one of the nominees for our Lowdown Athlete of the Year award. As if you needed an explanation, here are 10 of Kobe’s best buzzer beaters. (Hail Mary Jane)

Have you done your Christmas shopping yet? Well, if you were looking for some holiday-themed NFL swag, here’s a look in quiz form. (Simon on Sports)

If that doesn’t help your shopping, the MLB has some new garb for you for winter. (Big League Stew)

Today’s photo gallery is a continuation of the 2000s theme. This one is the Top 40 hottest athletes of the 2000s complete with gratuitous eye candy. (Bleacher Report)

In Kazakhstan, for their own make benefit, they turn Mercedes E-Classes into Rolls Royces.

The whole holiday season can get some folks down in the dumps, myself included. Nothing makes me feel better than laughing at folks doing stupid things.