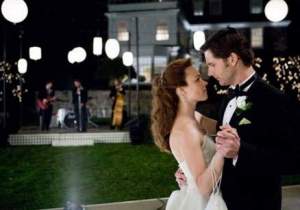 As I have mentioned in the Entertainment Link-Off, the movie review is finally here.

Adapted from the 2003 best-seller by Audrey Niffenegger, The Time Traveler’s Wife is a decent romantic film that follows a star-crossed couple as they come to grips with having one of them constantly falling through a hole in the time-space continuum.

The story focuses on Henry (Eric Bana) who is a time traveler, although not by will. He suffers from a rare genetic condition called “chrono displacement”. He can’t control when it happens or where he will go, although he is frequently drawn to specific geographical and/or chronological points that have a particular resonance in his life. Since clothing cannot travel with Henry, he appears naked at his destination, so finding clothing is always his first priority.

Henry has been visiting Clare (Rachel McAdams) since she was a little girl (it really isn’t as creepy as it sounds). While Claire first meets Henry at the age of 6, it was their encounter at a Chicago library when she is 21 (and he is 28) which marked the first meeting for him and the nth meeting for her. She has fallen hopelessly in love with him, so it’s natural for her to open her heart to him. It is a totally different experience for Henry, who is stunned and awed by the way this woman suddenly thrusts herself into his life. It seems it is fated for them to become man and wife. While this seems like a magical love story come true, it does come with some baggage. Henry’s frequent, unpredictable travels put a strain on their relationship, especially when he disappears for a lengthy period of time.

Despite the fact that this film is a nice, enjoyable love story, it does have some flaws. The shifting between the past, present and future makes the film feel a bit jumpy at the start. It takes a bit of getting used to before finding its groove. The audience may find the film a bit uneasy at the start but it takes some getting used to. I certainly recommend reading the novel before seeing the film. 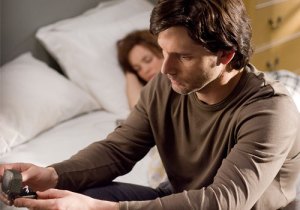 The subject of time travel can also potentially be a problem. We first meet Henry at age 6 as he’s being magically transported away from a fateful car accident that claimed his mother’s life. As young Henry shivers on the snowy roadside, he’s consoled by an older version of himself, who suddenly appears to tell him that everything’s going to be all right. It’s the first of many instances where The Time Traveler’s Wife violates the standard sci-fi laws of time travel. You can’t talk to your younger or older self, you can’t alter the past or future and you can’t tell people about how their lives are going to change. While many would complain about this, the violation of these laws seem to work well with this story/film, so the audience is better off playing along with the movie rather than picking the story apart.

We learn that there are certain triggers to Henry’s condition. His time travels can be exacerbated by stress and can catch him unaware if he is overtired. One of the main flaws in the film is that it failed to clearly demonstrate this. There are many moments when it seemed he would vanish for no apparent reason. It was not until late in the film when the explanation for his disappearances was briefly mentioned in a simple line or two, which felt a bit unsatisfying.

The role of Henry is well served by Eric Bana as he once again demonstrates that he does have the acting chops to be a leading man. It was nice to see him switch gears after playing the ruthless villain in Star Trek. Meanwhile romantic drama veteran Rachel McAdams once again provided a radiant performance that makes it easy for the audience to fall in love with her. The strong connection between Bana and McAdams does lift this film from mediocrity as their matching dimples and starry eyes made it irresistible to root for them as a couple.

Robert Schwentke once again demonstrates that he is a fine director. I liked the thriller Flightplan back in 2005 and he showed some versatility by doing a slow-paced drama like The Time Traveler’s Wife. There were some really beautiful shots in the movie and his use of colour schemes is quite crafty though it is probably missed by most moviegoers. 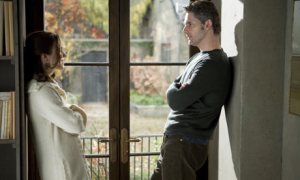 While there are plenty of weepy moments in The Time Traveler’s Wife, there’s also a fair bit of humour that plays very well with the time travel concept. One of the highlights in the film takes place during the day of Henry and Clare’s wedding. As Henry’s condition of time traveling is brought on by stress, his sudden disappearance led to a series of comical events. As an older Henry pops back in to save the day, it was amusing to see the reaction from the faces of the other characters.

Many film adaptations of novels end up being constrained by the source material. The Time Traveler’s Wife managed to break free from the constraints and successfully honours the Niffenegger’s novel so it should please many fans out there. Time travel is a tricky concept and the jumping back and forth can be a great source of confusion. The novel puts greater effort into indicating when certain things are taking place, which is something that is missing from the film. To make up for it, screenwriter Bruce Joel Rubin anchors the film to the present timeline in order to provide a streamlined movie that everyone can follow along. The film plays off like a “best of” compilation of the book by tying together the key events and skimming over the detailed subplots. Perhaps the film did too good of a job simplifying things because certain details would have helped make this a better film. While this is not the best novel adaptation, it is fairly respectable and it is another fine example that not all film adaptations fail to grasp the heart and soul of the book.

The book provides a better enriching experience, but this is well worth the price of admission for those who appreciate romantic fantasy. The Time Traveler’s Wife certainly fits the current mood of today’s romancers seem to want a little conjuring with their canoodling. It is a nice alternative to the fact that love can be a big slap to the face in reality.

One thought on “Movie Review: The Time Traveler’s Wife”