In Italy, there is no team other than Ferrari. Sure, football (or soccer as it’s known in my half of the world) is the national sport but the national team is Scuderia Ferrari. The Tifosi were out in full force at Monza for the Italian Grand Prix. And they went home happy as Fernando Alonso scored the pole and the win in his first Italian Grand Prix for Ferrari as the Scuderia put both drivers on the podium. Alonso’s win combined with poor outings for the championship leaders also gave us a much more interesting championship picture heading into the final stretch of the season.

With Alonso on pole, this should have been a coronation of Ferrari’s new hero. It didn’t start that way for Ferrari. Jenson Button took advantage of his superior downforce and got the jump off Alonso from the lights. Lewis Hamilton also took advantage of the jostling up front and got to fourth out of the first chicane. However, he got a little too ambitious heading into the second chicane. The championship leader collided with Felipe Massa, broke his right front suspension and it was game over only halfway around the first lap.

Up front, the top three of Button, Alonso and Massa traded fast laps while the Red Bulls of Vettel and Webber ran in 7th and 8th. Alonso would catch the McLaren in the fast first and third sectors while Button’s downforce advantage allowed him to even out the gap in the more technical second sector. The gap would shrink and grow ever so slightly over the course of the first stint until pit stops. McLaren blinked first and brought Button in while Ferrari and Alonso waited a lap. The extra lap on soft tires made a difference but not as much as a lightning fast pit stop by Ferrari which got Alonso in to the lead and he never looked back.

Christian Horner hinted that  Red Bull would be willing to use team orders to win both championships. So when Vettel led Webber, he was told that his engine was starting to fail. However, the cynics came out when that problem sorted itself out when Vettel’s pace picked back up after Webber got by him. The words “team orders” came out pretty quickly. Webber finished the day in 6th to take over the Drivers’ Championship lead. Vettel recovered from his engine maladies using pit strategy that saw him change tires at the end of the second last lap of the race. He jumped his way to 4th with the Red Bulls separated by Nico Rosberg’s Mercedes.

After the excitement of this race, the championship picture has been scrambled once again.

It looks as though it’s a two man race with Webber and Hamilton separated by five points. The other three listed are a ways behind the lead but with wins being worth 25 points this season and the gap between a first and second place finish being 7 points, you can’t count any of this lot out of the running quite yet. 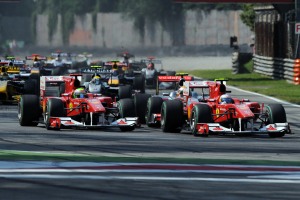 Lost in my posts last week about the FIA declining to accept a 13th team for 2011 (which, again, is the FIA’s fault and not a reflection on the applicants) and the provisional 2011 schedule was the Ferrari team orders ruling. The World Motor Sport Council ruled that no further punishment be handed down to Ferrari. That was a smart move because additional penalties would have opened Pandora’s Box. Well, this still opens Pandora’s box as far as the fans are concerned because teams will be allowed to “influence” the result of a race.

It is often debated how much of a team sport F1 actually is. There is an individual component to it with individual drivers assigned to a given car that is prepared by his team. The question with team orders has always surrounded how much of a team sport is F1. If it was a hockey game and the Pittsburgh Penguins double-shifted Sidney Crosby and Evgeni Malkin late in the game over giving Max Talbot his usual shift, would anyone complain? But is that an apples to apples comparison because individual accolades must be sacrificed for the good of the team or apples to oranges because a single individual can contribute more to the success of a race team than a hockey team?

I think the whole debate comes down to this: Like a holding call in football can be called on every play, team orders can be found in every F1 race. People are quick to forget what McLaren was up to at Turkey that went unpunished. Lewis was told that Jenson was not going to pass him. After they nearly took each other out, Jenson was told to save fuel. That’s subtle code for slow down and let Lewis win. Ferrari was caught because Rob Smedley was less subtle and Fernando was bitching over his radio. One was called team orders while the other wasn’t. Hell, teams could be rung up for influencing the outcome of a race based on who makes their pit stops when and which tires they start on. Punishing Ferrari would have started us down a slippery slope from which the application of common sense would be hard pressed to haul the sport back from.

Speaking of ridiculous penalties, Vitaly Petrov was penalized five grid spots for blocking Timo Glock in Q1. That has to be a mistake. It’s impossible to hold up a Virgin car. They’re so much slower than the Renaults.

And in other ridiculous penalty news, Jaime Alguersuari was given a drive-through penalty for cutting one of the chicanes during the race. Meanwhile, Nico Hulkenberg cut a chicane three times while attempting to hold off Mark Webber without being penalized. Good to see the stewards are being consistent in the application of the rules.

After this race, we’re down to five races to go in the season. With NASCAR’s Chase to the Sprint Cup starting at their next race, I think five to go is a good time for me to look at my hypothetical Chase for the F1 Championship. 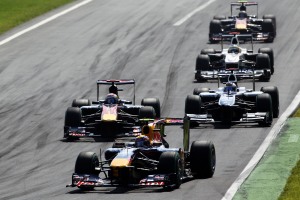 For the sake of brevity, I’ll only work through this hypothetical situation with the current Chase system. For this, we’ll take a quarter of the field (6 cars) into the championship chase. In the current NASCAR system, all drivers start level at the start of the Chase with bonus points awarded for wins during the “regular season.” For the F1 example, let’s start the Chase drivers level on 350 points and give them five bonus points for each “regular season” victory.

So with all that laid out, let’s take a look at the Chase for the F1 Championship standings as we head into the “Chase.”

The biggest beneficiary in the chase scenario is Ferrari. Massa comes 63 points back without a chase to 20 points back and right in the championship. Alonso closes his gap from 21 points to 5. And since everyone is complaining about team orders likely to make a return to F1 thanks to the World Motor Sports Council’s decision, it wouldn’t be smart for teams to influence the results if both their drivers are in contention for the title. Could you imagine the outrage if Ferrari favoured Alonso and Red Bull favoured Webber while Massa and Vettel were still well within contention? (Of course, McLaren could favour Lewis because the Brits have taught us over the last month that it’s okay when McLaren do it.) A Chase would definitely make things more interesting. It’s just too bad it’s so artificial a way to name a champion.

The French sports newspaper L’Equipe says that Magny Cours is targeting a return to the F1 schedule in 2012. Finances were the main reason that the French Grand Prix was dropped from the schedule after the 2008 event. However, Bernie (being Bernie) wanted the race out of rural France and close to Paris. Ideally, I’m sure, he’d like a Paris street race with a spectacle that rivalled the final stage of the Tour de France. However, he was so adamant about getting F1 closer to Paris that he considered having the French Grand Prix run at the Paul Ricard Circuit. That circuit is largely used as a test circuit and has no grandstands. The event would have just played out in front of VIPs, team guests, the attending media and TV cameras. In other words, it would have been just like the Turkish Grand Prix. Anyway, while Magny Cours wants F1 back, I’m not so convinced that F1 wants them back as badly.

We’ve entered the home stretch of the 2010 Formula One World Championship. The next race is the Singapore Grand Prix in two weeks. The original F1 night race has been a bit hit and miss in terms of excitement. The 2008 GP saw the field jumbled up by the Nelson Piquet-caused safety car. The 2009 race was a bit more of a parade but had the interest of the two Red Bulls trying to save their brakes.

I’d expect this year’s race to be closer to 2009 than 2008 in terms of unexpected results. The Red Bulls have been strong in the season’s two street races with Vettel and Webber splitting the victories. However, the McLarens looked strong in the Canadian Grand Prix which looks to be the only track with comparably low levels of grip. Granted, the Hungaroring also is a low grip track where Red Bull dominated. It should be an interesting battle in qualifying for the win.