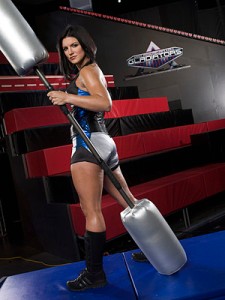 While NBC has yet to take down the official site for the reincarnated American Gladiators, don’t look for it to air anywhere on the network this summer. NBC did have tentative plans to bring back American Gladiators for a third season, however that plan was scrapped after the show barely averaged 4 million viewers last summer. Part of the blame for the low ratings is NBC’s idiotic scheduling. Having the second season air just three months after the first round didn’t generate enough hype for people to carry over to the second season. Also, since the show was going to be dumped as summer programming, they shouldn’t have high expectations to begin with. As an American Gladiators fan, I am disappointed that I won’t get a weekly fix of this show. I’m going to miss the awesome events like Joust or Powerball. I’m going to miss watching those gladiators pummel the contestants. I’m going to miss the Hulkster doing ridiculous poses while hosting the show. In fact, I’m really going to miss Crush (picture on the right) and Phoenix! Now I have nothing to watch over the summer (except for CBS’ Harper’s Island, which got banished to Saturdays)!

There is a possibility that the show will come back on a different network, but I’m not confident that it will. On the bright side, the creator of the show plans on doing a feature film for American Gladiators! Oh sweet silver lining!

Ok, perhaps the Hulkster, the awesome events, the wildly entertaining gladiators and the eye candy couldn’t save the show, but as long as there are ideas floating out there, American Gladiators can live on… somehow. Creator Johnny Ferraro already has a movie version of American Gladiators in development, but don’t expect two hours worth of competitions though. Apparently it will be an action flick set in the Gladiators universe. There is no word on what the plot will be and when we should expect to see this on the silver screen. Ferraro also claims that there will be new characters introduced in the film (time to think of awesome names that are along the lines of Titan or Wolf).

So this doesn’t exactly sound like the brightest idea out there, but I don’t really care. American Gladiators is coming back! There’s going to be action, people loaded with steroids, more action and ridiculous cheesy lines! I’m in! Where can I get tickets?!

Plus, wouldn’t it be great to see Crush come back on a giant screen at the theatres? A guy can always dream…

On to other NBC related news…

NBC decided to swallow a rather large cash penalty for not picking up David E. Kelly’s legal dramedy ‘Legally Mad’. Sources say NBC will have to pay a seven-figure penalty to producer Warner Bros. as a result, since the network ordered the pilot with a play it-or-pay up provision. There were reports last week about a lukewarm reception for the pilot during the screenings and it was only in play for a fall pick up because of the hefty monetary penalty.

There are speculations that the fate of the show is linked to Chuck (which is also produced by Warner Bros.). Rumours were floating around claiming that NBC would be willing to pick up Chuck if the studio was willing to drop the penalty for not picking up Legally Mad. While that rumour has been debunked, it’s still good news for Chuck fans out there. With another pilot out of contention, it does open up some room in the fall schedule for the return of our favourite Nerd Herder. NBC will be announcing the full 2009-2010 schedule on Tuesday May 19. Until then, let’s continue with the Save Chuck campaign!

3 thoughts on “Forget NBC! Gladiator-maniacs to the Big Screen!”