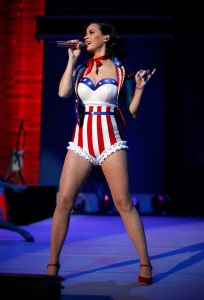 This morning, America turned the clocks back by one hour for Daylight Savings Time. On Tuesday, there’s a possibility that America can turn the clock back by 40 or 50 years with this year’s US Presidential Election. It’s Clinton vs. Trump in a battle of the two most disliked candidates in democratic history. That’s an important statement since Republican voters are voting against Clinton instead of for Trump. Any other candidate on either side would have made this election pretty boring.

Irony deficiency is a serious medical condition. Someone should check on Melania Trump because she said her work as First Lady would be to fight online bullying. It didn’t seem like she got the irony of that statement. (The Gaily Grind)

By the way, the AP said that Melania was paid to model while in America before she got a work visa. (The Associated Press)

At a rally last night, The Donald was whisked off-stage by the Secret Service. There was no assassination attempt. It was a man holding a Republicans Against Trump sign that caused a ruckus with Trump diehards and he got beaten for it. (The Guardian)

Daniel Dale went from covering Rob Ford to covering Donald Trump. The difference between the two is that, for all his demons, Ford actually cared about his city and constituents. Anyway, here’s a database of many of the false things Trump said during the campaign. (Toronto Star)

The National Enquirer loves its gossip but perhaps only about certain people. They paid a Playboy Playmate of the Year $150,000 for her story about having an affair with a newly re-married Donald Trump in 2006 (one year after marrying Melania) but spiked the affair story. The Enquirer’s owner is a friend of The Donald. (Wall Street Journal)

“The FBI is Trumpland” according to one current FBI agent. So perhaps there is something to these claims of Hatch Act violations. (The Guardian)

The founder of Media Matters says that he will pay the $5 million fine for anyone willing to leak tapes of Donald Trump saying terrible things on the set of The Apprentice. (MSNBC [Video])

Team Trump is denying it’s existence but a casting note for a new conservative news service landed in the hands of Fox News. Everyone takes that as a sign that Trump TV is coming soon. (Salon)

I’ve mentioned it previously but Trump’s free infrastructure plan will see you pay for it but not with your tax dollars. (Slate)