The fifth entry in the main Battlefield franchise and the thirteenth full game with the Battlefield name is the World War I themed Battlefield 1. While the name is confusing, DICE is moving forward with the franchise by going back in time and using lessons from Battlefront and Battlefield 4 & Hardline to improve their latest effort.

The open beta featured two game modes on one map. While content was lacking compared to many other betas, including the Battlefield Hardline beta, you could tell that a lot of time went into making the Sinai Desert map that was featured in the beta.

It’s an absolutely gorgeous map that seems to borrow some of the visual tricks that were used to create the realistic environments in Battlefront. The sand, buildings and rocks all look very realistic and are lightyears beyond what we saw in BF4 and Hardline which weren’t bad looking games. The particle and destruction effects looked right out of Battlefront as well so they’re quite good. Like Battlefront, the engine is quite stable and ran better than 60 FPS on my outdated AMD 7970. Granted, I didn’t look at the detail settings because it looked good and ran smoothly so I’m not going to play around with settings that work. So, for once, a game has decent auto-detect for your video settings. If anything, I’m starting to think that Battlefront was a tech demo for current gen games using EA’s Frostbite 3 engine. That’s a shame for people who spent $60+ on it then but it benefits everyone who spends $60 on a DICE game in future. Not that it makes your Battlefront experience worth it. 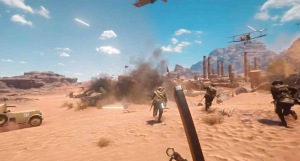 Anyway, Sinai Desert a wide open desert map with a village at the centre and a couple of buildings and outposts (with trenches) on the outer edges of the map. Some of the buildings on the map are destructable and I quite like that heavy weaponry leave big holes in the sand where they land. This being the only map available for this beta, we don’t know if holes in the terrain is a feature exclusive to Sinai or if that will be on all maps.

The map itself isn’t the most balanced I’ve ever played. Because it’s so open, even with all buildings standing, it’s a good sniper map. Even with the glint of sunlight coming off the scope (which is a nice touch), you’ll never be able to adequately spot a sniper until he puts a bullet through your head. With elevated terrain and rocks for cover, it’s pretty hard to spot anyone not running on the sand. That is mitigated by the fact that the game will occasionally throw a sandstorm your way which drops visibility to nearly nil. There were some scattered reports that weather effects are handled client-side rather than on the server. A gamer on Reddit showed a side-by-side of he and his buddy in the same match but he was in a sandstorm while his buddy had a lovely sunshiny day.

The two game modes on offer were the Battlefield standard Conquest and Rush modes.

Conquest is pretty much the trademark Battlefield multiplayer mode. The Sinai map has seven points (two close to each base and three down the longitudinal middle of the map) for each team to capture. Capture points and kill the enemy to drain the other teams tickets until the match ends. There are variants of this mode in countless games but it’s Battlefield’s bread and butter multiplayer mode and they still do it extremely well.

This being beta, there are still some growing pains with this mode in BF1. Balance between teams is lacking because I’m not sure I lost a game of Conquest all beta and I’m not very good at Battlefield so it’s not like I’m carrying. Whether it’s a feature of Conquest or Sinai, I don’t know, but there’s a giant train that can run through the level. I’ve read that it’s an emergency catch-up mechanic for teams getting massacred but it wasn’t explained other than “here comes the train.” 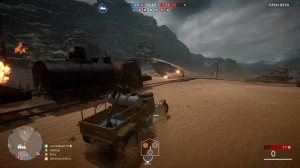 I’d like to talk about Rush but I didn’t really care for it. DICE chose to go 12 v 12 for Rush in the BF1 beta and it really suffers for it. What little I played of it felt empty. You have this wide open map with almost with 12 people pushing two objectives so it’s more like two small skirmishes happening simultaneously. Adding vehicles into the mix makes it feel worse because you’ll have up to five members of an enemy team in one vehicle which just empties the map more.

I’ve read that Rush was traditionally a 16 v 16 game mode and DICE really needs to consider going to at least that number of players. Perhaps they could go as high as 20 per side but that pushes you a little closer to the chaos intended for Conquest.

On the plus side, they’ve made a massive improvement over Battlefront in that Rush requires you to capture all points in a tier before moving onto the next. Battlefront only required on point in a tier to be captured so the games favoured the attackers. Reducing the number of points as you went struck the balance between attacking and defending. Early in tiers, the attackers had the advantage but it swings back to defenders as points to capture decrease. 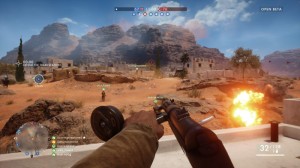 It’s not just the historical accuracy of the weapons in the game but how they’re balanced. I usually played as the medic class (which doesn’t serve a purpose as revives don’t refund tickets in BF1 and medics aren’t really notified when you can revive) which came with a semi-auto rifle as standard. You either have to be really good or really lucky to do much damage with a semi-auto against someone with an automatic weapon as they can spray you down in an instant. If semi-auto or bolt-action weapons did a more damage than automatic weapons to balance weapons in terms of DPS, they can find the weapons balance so people could play how they want to rather than making auto weapons a necessity.

Speaking of balance, there are a lot of complaints about vehicle balance in the game. Apart from other tanks, there isn’t much that can do significant damage to tanks. Granted, that’s not unrealistic but general feedback is that it’s not fun for tanks to run roughshod over the battlefield. I keep saying that I’m not good at shooters but I managed to top the leaderboard in one match because I rode shotgun in a tank that just moved from point to point. We were never really in danger of being taken down unless another tank showed up. If there’s a way to buff anti-tank weapons or place more anti-tank weapons without making it overpowered against infantry, DICE needs to look into that. 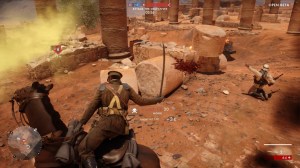 We’re still a month and a half from the release of BF1 and we know that there will be a lot added to and tweaked in the game over a year-plus of expansion packs. If we learned anything from Battlefield 4 and Battlefront, it’s that DICE is willing to put a near unparalleled amount of post-launch support into their games. One would assume that would include support of Battlefield 1.

Of course, that doesn’t help with the issues that this feels a lot closer to Battlefield 4 thrown in a time machine and sent 100 years in the past rather than a proper World War I game. Granted, I will concede that I fully expect the campaign to be more historically accurate in terms of weapons than multiplayer. We won’t find out if I’m right for over a month, though. It’s just as possible that BF1 turns you into a Battlefield Hardline-esque one-man killing army. Well, more so that you usually are in a Battlefield game.

But this is a multiplayer beta and I have to assess it as a multiplayer experience. New weapons and pretty pictures aside, I can’t help but feel like I’ve been there and done that with Battlefield 1. Maybe there’s something special that DICE has in reserve for launch, a last-minute emergency beta or even for one of the expansions but there isn’t anything compelling enough in this beta to make me think that I’ll buy this on launch. When you add in the fact that we’ll see a massive price drop or sale within a year and the expansion packs, which usually have worthwhile content, double the price of the game, I’ll probably get back to you on this game come late 2017 or early 2018.

The Battlefield 1 open beta was reviewed on PC but was also available on PlayStation 4 and Xbox One. The game is scheduled for release on October 21st. The impressions of the game as written do not necessarily represent the state of the game at final release. Your impression of the game may differ based on platform played on, PC specs and how historically accurate you want a World War I shooter to be.