The British Grand Prix started behind the safety car because of standing water on the track. Fans complained about the overly cautious start to the race but little did they know that this start to the race would make for the most exciting part of the afternoon. Changing conditions made for some exciting moments as drivers coped with a track that was too wet for inters and then too wet for slicks.

Lewis Hamilton ended up winning his home grand prix in a race that will likely be remembered for the first penalty from F1’s radio rules.

The race spent its first five laps behind the safety car during which teams debated the need for a safety car (including Hamilton who nearly clouted the back of it) and whether a swift switch to inters was in order. Interestingly, the four competitive cars who went the longest on wets (Hamilton, Rosberg, Verstappen and Perez) all finished in the top six so perhaps begging for inters during the safety car wasn’t the right call.

From there, the race settled in. As the track dried and inters wore down, Max Verstappen had the highlight of the race as he made a move around the outside of Rosberg at Becketts in what will go on Max’s career highlight reel. Granted, he didn’t hold that position forever because of the superior Mercedes engine.

Apart from Verstappen’s move, most of the race’s entertainment was provided by cars struggling on the drying circuit. A number of cars were caught in the dogleg Turn One which only had a narrow dry line. The likes of Hamilton, Verstappen, Vettel, Raikkonen, Alonso and Sainz all had moments where they ran wide in the first turn as they clipped the wet part of the track with their tyres.

The most notable part of the race wasn’t the Verstappen pass or world champions struggling with the conditions. Rosberg had an issue with his gearbox that left him stuck in 7th gear. The team advised him how to fix the issue as it didn’t improve his performance relative to before the issue arose and was related to reliability and safety. However, they also told him to double-shift from 6th to 8th which the stewards deemed to be a violation on the sporting regs regarding driver coaching so he was penalized 10 seconds which dropped him behind Verstappen. 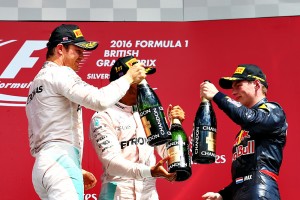 Hamilton’s win is his fourth of the season and leaves him just one point behind his teammate at the top of the WDC. Verstappen finished 2nd for the second consecutive race. For the first time, he wasn’t accompanied to the podium by Kimi Raikkonen. While he stood on the second step of the podium, the radio penalty left Rosberg classified 3rd.

Daniel Ricciardo finished in 4th for the fifth time this season. Kimi Raikkonen rounded out the top five and now sits 3rd in the WDC. As mentioned earlier, Perez’s long run on wets paid off with a 6th. Granted, it’s not like the Force Indias were slacking as teammate Nico Hulkenberg was next across the line in 7th. Carlos Sainz continued his streak of scoring points when finishing races with Daniil Kvyat in the other car. Since Red Bull’s driver swap, Sainz has out performed Kvyat in six-straight races including today’s 8th. Sebastian Vettel had a bad day that started with a gearbox penalty that left him starting 11th and ended in 9th after some questionable strategy calls. Kvyat rounded out the points which matches his best Toro Rosso finish of the season from Spain.

For the second race in a row, we have a booing controversy. This time, it was Nico Rosberg who was the subject of a loud negative reaction from the assembled masses at a Grand Prix.

You know, Formula One is a gentleman’s sport. We have racers running fair and square who are being booed for matters that have been settled last week. And yet, we have fans who are booing racers for no good reason. Their actions are unbecoming of Formula One fans and sporting fans as a whole. They should be ashamed of their behaviour.

Yes, that previous section is all ironic hypocrisy. The first thing that Ted Kravitz said on his notebook on Sunday was that the fans pay for tickets so they can boo whoever they want. Last week, the whole of the British F1 media had the one that I had above while I had their opinion last week. It turns out that all you need is a change of target and/or venue in order to justify fans booing the drivers.

I wonder if Ted thinks that the fans were morally obligated to boo Nico on the podium. Moral obligation is what makes the sport go round if you asked Ted in Austria.

Speaking of hypocrisy, where is everyone complaining about the radio rules now that they’ve bitten Rosberg? The rules needed to be changed when Hamilton was struggling in Baku but it’s just the rules and we have to live with it this week.

Silly season certainly heated up as Formula One went home this weekend.

The biggest domino of next season has fallen as Ferrari announced that Kimi Raikkonen will be back for 2017 alongside Vettel. There were rumours of the likes of Nico Rosberg, Sergio Perez and Carlos Sainz all being on Ferrari’s shortlist for next season but they are going to retain their current lineup for another year.

Force India was the subject of brief rumours over its second seat. A rumour popped up after Austria that Pascal Wehrlein would be moving up from Manor to Force India with Mercedes likely being the instigating force behind that. Instead, Nico Hulkenberg will take the second SFI seat along Sergio Perez.

Not strictly silly season news but an update on a story from last weekend.

Reports out of Sweden indicate that the team’s new packers are the Tetra Pak group. They’re Marcus Ericsson’s major sponsor and they’ve not only secured his race seat for the last two seasons but perhaps for the foreseeable future. Tetra Pak was reported to have funded the Sauber team’s trip to China and now will acquire an ownership stake in the team. Included in Tetra Pak’s commitment to the team is the payment of some €120 million in team debt.

For the moment, Monisha Kaltenborn will remain as Team Principal and Ericsson’s future with the team is surely secure. How Tetra Pak’s cash inflow to the team will manifest itself on the car, if at all, remains to be seen. Apparently, this latest funding will help the team complete a new aero upgrade package. It won’t give them the opportunity to test said aero package at this week’s Silverstone test.

The next round of the 2016 Formula One World Championship is a little different than usual. Normally, the next two races would be reversed but rather than lead us into the summer break, the next race is the penultimate one before summer vacation. It’s the Hungarian Grand Prix from the Hungaroring near Budapest.

Mercedes hasn’t won the Hungarian GP since 2013. Last year, the two Mercedes had a lack of pace and fortune that kept them off the top step of the podium. Considering that this is a track that seems tailor-made for Red Bull, we could see Ricciardo and Verstappen easily match the Silver Arrows for pace. If they’re to score another win this season, this would be a good place to do it.

But before that is the Silverstone In-Season Test. We’ll have that covered this time next week.