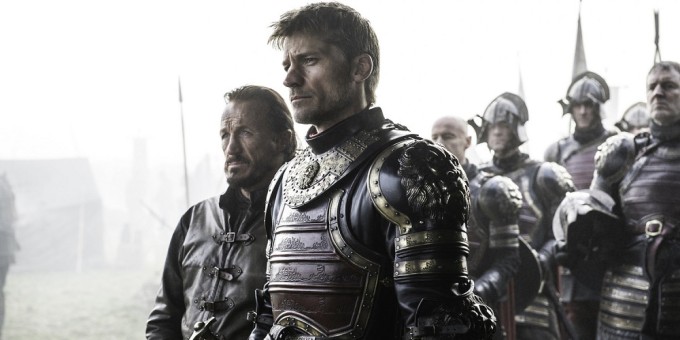 Now that I’m thinking about it, the title of this episode, The Broken Man, works on a literal level. Each storyline featured a male character that is broken in some role. Jaime is missing a hand. Theon is mentally broken. The Mountain might have lurked in the background but he’s a zombie and you could make the argument that Jon Snow is as well. The title is surprisingly on the nose. Well, at least we got Bronn back.

In a rare moment outside of the season premieres, we had a cold open for the episode. It re-introduced The Hound, this episode’s titular broken man. He’s joined up with some small group of people following a septon in the Vale who appear to be building chapels or some such in the middle of no where. It felt like a throwaway story just to reintroduce the younger Clegane brother in case everyone forgot the golden rule of fiction: If they don’t die on-screen, they aren’t really dead. I’m still waiting for The Mannis to rise again.

Okay, we got a vague idea of how The Hound survived. The Septon and his community kept him alive and nursed him back to health. In return, he joined the ragtag band of worshipers. Everyone thought that the end-game for The Hound was a showdown with The Mountain. For now, it looks like we’re going back to like Season Three where The Hound ran afoul of the Brotherhood Without Banners.

North of the Vale, Jon, Sansa and always Hand despite being short some fingers Davos went on a recruitment drive to muster an army to take back Winterfell. It’s an interesting insight into their characters that the Stark children struggled to gain support of the houses of the North because they only know how to leverage their names as a means to build their army. It’s an ongoing theme of the Starks struggling to learn how the real world works. You can see how their upbringing hurt Jon in becoming a true brother of the Night’s Watch and leading them as Lord Commander. You can see the development of Sansa’s character from helpless to the boss. Despite their growth since leaving Winterfell, they still aren’t skilled in the art of negotiation.

Enter Ser Davos. Much like he was the rational advisor and expert negotiator for Stannis the Mannis, he’s busy backing up the Starks as needed. He has the military strategy knowledge as demonstrated by the Stark encampment en route to Winterfell. He also managed to convince a ten-year-old girl to lend her army to the Stark cause when the Stark family name wasn’t enough. You look for themes in the season and while powerful women running the world is still chief among them, it’s part of the bigger picture sign that the balance of power is changing in Westeros. The Stark and Lannister names started the series as among the most powerful but now are nearly worthless.

It’s funny reading pre-episode speculation every week to see how little of it actually comes true. Personally, I wouldn’t have it any other way. If a show is predictable, it wouldn’t be as fun or interesting. Take Arya’s scene for the week. She shows up at the very end to buy passage back to Westeros only to be stabbed by the Waif who was disguised as an old woman.

Last week’s episode ended with Arya retrieving Needle and going to sleep in a pitch black room which led to everyone thinking that Arya would hold her own against the Waif because she trained while blind and get her with Needle unexpectedly. Turns out that Arya got the Stark family special. She was stabbed in the gut like Jon and Talisa. It’s an appropriate call-back to previous events, whether intentional or not. It’s clever imagery that provides a little depth to the scene. The problem is that I just don’t buy that Arya is in danger. If she was going to die, she would have died right then.

And speaking of funny speculation, how many people where looking forward to Lady Olenna versus Cersei this week? People were expecting a great verbal duel that would result in The Mountain being unleashed. Instead, Olenna went up one side of Cersei and down the other. Diana Rigg is not so secretly the best actor on the show now that Charles Dance departed and she commands the screen every time that she’s on it.

The only one that gives Diana a run for her money is Natalie Dormer. Getting back to fan speculation, everyone thought that Maggie was faking her religious conversion and she slipped a note to Lady Olenna to confirm it. It is an interesting meta analysis to examine the Queen Margaery character because Maggie is a good actress playing a role which is being played by an actress playing this dual role. It all traces back to Natalie Dormer who is playing this well enough that you believe that you went into this episode thinking that there’s a possibility she might not be faking it. It’s great acting by the character and therefore the actress. Unlike the likes of Diana Rigg and Charles Dance where you can see how good the actor is, Maggie is a character where the actor is acting as a character acting so you can’t separate the actor from the character because they’re performing the same task and it’s brilliant as a result.

Overall, this was a pretty slow episode that was focused on exposition rather than action. That’s not necessarily a bad thing but half of the episode didn’t seem to be going anywhere. Yeah, a war is coming between the Lannisters and Freys against the Tullys. The Wildlings will face the Boltons with the Armies of the Vale playing whatever role meets Littlefinger’s needs best. Defeat of either army will suit Littlefinger’s needs as he gains allies. South of Riverrun, though, there isn’t much happening. I’d imagine that will change a little bit next week.

Next week, everyone prepares for battle. Brienne and Pod make it to Riverrun to recruit the Tullys to the battle in the north but have to deal with that Lannister army first. Arya is still on the run in Braavos. Something is happening in Meereen. And it appears as though Cersei will finally have that much discussed trial which means that she will unleash the Mountain.