All the luck at Mercedes seems to go one way. It either goes all to Lewis Hamilton or, as it has lately, Nico Rosberg. With two engine failures in qualifying and a water pressure failure that looks to have rendered another useless, it looks like luck isn’t on Lewis’s side. Nico, on the other hand, has a nearly two-race points lead after winning the first four races of the season including the Russian Grand Prix.

There are many things that you can accuse Red Bull motorsport boss Helmut Marko of but being indecisive isn’t one of them. In the wake of the Russian Grand Prix, Marko seems to already be laying the groundwork for 2017 at Red Bull and Toro Rosso starting with the Spanish Grand Prix. 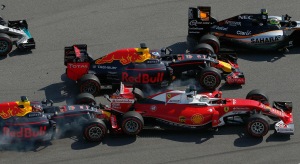 First, some context since we aren’t doing a race recap. Daniil Kvyat started 8th on the grid for his home race but certainly wasn’t that far up the grid after the first lap. Kvyat locked up into Turn Two (the first proper turn of the track) and punted Sebastian Vettel into Daniel Ricciardo. Then in Turn Three, a wounded Vettel was rammed from behind and into the barrier by Kvyat. Not surprisingly, Kvyat didn’t make many friends in Ferrari, with the race stewards and even in Red Bull because damage to Ricciardo left the team without points in the race.

In a move that was expected after the season rather than in the middle of it, Red Bull is doing a mid-season driver swap. Kvyat will be returning to Toro Rosso and Max Verstappen will be assuming his seat with RBR. I’ve often heard that all drivers are contracted to Red Bull Racing and the STR drivers are loaned to Toro Rosso. If that’s the case, that would make this a pretty simple transaction for the two Red Bull teams to pull off as all that would need to be done is printing new driver and number stickers for the cars and molding some new seats.

Marko was pretty open about the likelihood that one of the four Red Bull drivers wouldn’t be returning for the 2017 season. It was believed that Kvyat was the most likely candidate for the hot seat but I don’t think anyone expected his seat to get quite so hot quite so fast. Added on to the issues at Red Bull was Verstappen’s public discussion of wanting to move up to RBR next season. It’s believed that there was mutual interest with Ferrari and the Scuderia probably could have put together a deal to pry young Verstappen away from Red Bull.

Of course, this move isn’t happening without some controversy. Jenson Button fanned the flames when he tweeted accusing RBR of having a short memory as Kvyat finished on the podium in China. However, Kvyat also started the season by being eliminated in Q1 in Australia and Q2 in Bahrain. In China, he was also accused of being a bit mad at the start by Vettel (though clearly not as mad as in Russia). Even with that podium, it’s not like Kvyat has had a great season and one podium does not change a career. After all, Pastor Maldonado is a Grand Prix winner and he’s out of the sport.

Some of the rules for the 2017 season have been approved by the World Motor Sport Council. While we haven’t got a complete set of aero rules, the WMSC has approved the engine rules for F1 going forward.

As usual, cost is a big part of the rules package. The new rules will see a mandatory reduction of power unit pricing by €1 million for 2017 and another €3 million for the 2018 season. This will coincide with a reduction of the number of power unit components available to drivers over the course of the season. The FIA’s target is to get down to three power units for the 2018. Whether that’s the 20 or less number of PUs or the set number regardless of races remains to be seen.

The other big part of the rules package is a target for power convergence. There are measures that are in the new rules to try to equalize engine performance as much as possible. This includes constraints on part weight, dimensions and materials along with turbo boost limits. I’d imagine that convergence is more likely to reign in Mercedes and Ferrari than boost Honda and Renault.

Also interesting is that there is an “obligation to supply” clause in the new engine regs that allows the FIA to mandate that a manufacturer supplies at least three teams. This is to avoid a repeat of the situation that Red Bull got itself into ahead of this season in which it took year-old Ferrari engines for Toro Rosso and went crawling back to Renault for RBR. As Honda and Renault are both under the three team minimum under which they are subject to the obligation to supply clause, this rule is aimed at them.

Speaking of engines, the tables have turned in the Red Bull and Renault relationship. Reports now indicate that Renault is trying to extend its existing agreement with RBR beyond the 2016 season with the hopes of having a deal done before the end of the month as per the new obligation to supply rules.

Given the obligation to supply rules and the success of Red Bull with the unbadged Renault engines, Renault is trying to sign a deal with Red Bull to keep their engines in the car. I’d imagine they’re also pushing to get Renault badging on those engines as well.

After Red Bull started to look elsewhere for engines last year, Renault said they would only focus on the works team. Now, reports say that Renault likes having Red Bull as a benchmark for engine and chassis performance. Considering how far back Renault typically finds itself so far this season, they need to have some gauge to know how much of their battles with Sauber and Manor are the engine and how much is the chassis. Based on RBR’s early season results, I’d say mostly chassis.

One last engine note: The upgraded Ferrari power unit will be ready for the next race. Experts believe that it will be enough to close the gap to Mercedes. Of course, we don’t know if Mercedes is sandbagging at all. If they are, it’s season over.

There have been a couple of interesting rumours circulating around Williams of late.

According to Sky’s David Croft, Jenson Button nearly returned to Williams for this season and he would have displaced Valtteri Bottas in doing so. Apparently, the late announcement of Williams activating Bottas’s option for 2016 was a result of waiting on Button to make a decision. However, Croft did note that both Button and Felipe Massa’s contracts expire at the end of this season which leaves the door open for a return to Williams to close his career.

It’s interesting that Button would replace Bottas. The Finn is a hot prospect and is believed to be coveted by Ferrari as a potential replacement to Kimi Raikkonen. It would seem odd that Williams would risk a future consistent points scorer and replace him with a man who is only a couple of years from retirement. With two potential open seats for 2017, a Button move (especially so McLaren can replace him with Stoffel Vandoorne) would work. I don’t give much credence to Button to Williams to replace Bottas for 2016.

And Canadian prospect Lance Stroll has signed on with the team as a development driver having moved over from Ferrari. Rumours suggest that Stroll signing on with the team is a precursor to his father buying into Williams as a shareholder. A similar deal was rumoured with Sauber last season which also would have seen Lawrence Stroll sponsoring and buying a share of Sauber as a precursor to Lance getting a race seat when eligible.

For now, Williams says that Lawrence Stroll hasn’t discussed buying a significant share of the team’s ownership. However, one Redditor says that a friend at Williams told him that sponsorship from Stroll is paying for a new simulator for the team. While Williams isn’t willing to admit that there is a fire causing this smoke but Stroll is certainly investing in this team one way or another. 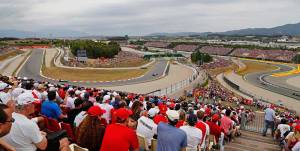 The next round of the 2016 Formula One World Championship is the first round of the European portion of the season. Sure, the teams are very familiar with the circuit but testing is one thing. The 2016 Spanish Grand Prix from the Circuit de Barcelona-Catalunya is another.

After winning four races on the trot, you have to like Nico’s chances of winning a fifth race. Luck could give Lewis a chance at winning his first race of the season. His race pace was superior to Rosberg’s in race sims during testing. Don’t count out the Ferraris who are turning up with upgraded engines that are supposed to nearly eliminate the gap to the Silver Arrows.