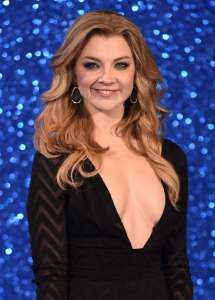 The New Hampshire primaries were last night. The Sanders win probably wasn’t a huge surprise but the GOP was probably a shock with Trump winning by doubling up on John Kasich who was a shock second place. I guess the Rubio challenge was short-lived. Granted, we do have a long way to go until November.

Anyway, it’s Wednesday so it’s time for the links. Let’s kick things off with Natalie Dormer.

I find it slightly ironic that FX Canada is showing a mini-series about the OJ Simpson trial at the same time as the Jian Ghomeshi trial takes place in Canada. These two cases could have some amazing parallels when it’s all said and done because of how much of a disaster this case is becoming for the Crown. (The Globe and Mail)

The press isn’t just dishing it out to Trump. They’re taking it from him too. (Washington Post)

The most unique Trump story you might find today: Trump tweets over Simpsons scenes. (The Comeback)

Mark Cuban has some thought about millennials, socio-capitalism and how this will impact the 2016 Presidential Election. (Blog Maverick)

To try to win New Hampshire, the Hilary campaign brought out Gloria Steinem and Madeleine Albright to tell women that they were obligated to support Clinton because of their gender. (New York Times)

This isn’t actually the first time a Clinton campaign has played this card. Hilary did this in 2008 against Barack Obama. (Daily Kos)

Tangentially related to that, is the press treating Chelsea Clinton as a White House kid? (Politico)

According to a lawsuit, former Fox Sports reporter Colleen Dominguez was the subject of age and gender discrimination. They allegedly wanted her to get a facelift, sent her to Erin Andrews’s hair stylist and gave her hair extensions. (Deadspin)

WWE star Daniel Bryan retired from in-ring competition because of damage from numerous concussions. Many doctors cleared him but a new test showed the extent of his damage. What does it say when pro wrestling has suddenly vaulted ahead of pro sports in handling head injuries? (Screengrabber)

In StarCraft, a build that says 14 Nexus doesn’t mean build 14 nexuses. It means that you should build a nexus when your unit supply hits 14. Don’t tell AlbinoFly, though.

The highlights of Secret Hitler on TotalBiscuit’s Co-Optional Lounge have hit the interweb. I need this game in my life.