There are a lot of stories that you can write about Formula E drivers without having seen them actually turn a wheel in anger. You can talk about the redemption of former F1 drivers like Lucas di Grassi and Sebastian Buemi. There’s the retirement tour aspect with elder statesmen Nick Heidfeld, Jarno Trulli and Stephane Sarrazin in the field. And there’s the family legacy stories with Nicolas Prost, Bruno Senna and Nelson Piquet Jr. running Formula E.

The race started with Daniel Abt on the poll but the young German driver didn’t even hold the lead to Turn 1. Nelson Piquet dove up the inside into Turn 1 and took the point. Unlike many Formula E races, this one didn’t have a battle until the end. In fact, Piquet only lost the lead for a lap on the exchange of pit stops. As far as Formula E races went, this one was very anti-climactic.

That’s not to say that there wasn’t a bit of action. The first stint featured two safety cars which allowed the teams to stretch the first stint past well the halfway point. Safety car #1 came when Scott Speed hopped the curb and clouted the concrete wall at the exit of the first chicane. Fortunately for Scott, they replaced Formula E’s favoured sausage kerbs with small speed bumps inside the left-hand part of the chicane. The second safety car was prompted by an incident at the hairpin that saw Charles Pic divebomb Jarno Trulli in an ill-advised attempt to get by the car between them.

While Daniel Abt was able to hold second with Nicolas Prost third early on, Jean-Eric Vergne used his fan boost to jump the Miami race winner. Abt’s teammate Lucas di Grassi later dispatched Prost for 4th. Prost’s day would be completely undone after his pit stop with a drive-through penalty for contact that wasn’t reported on any graphic and confused the announcers as Formula E’s slow to update graphics are wont to do.

In the pitstops, Vergne was able to get by Abt when the young German was the first of the leaders to stop. To make matters worse, he received a drive-through penalty for excessive power usage during the first stint. That dropped him from the points with the exception of his three points for the pole. On that note, Prost scored two points for setting the fastest lap.

So by leading 38 of 39 laps, Nelson Piquet Jr. dominated to score his first Formula E victory. Jean-Eric Vergne scored the second place he should have picked up at Punta del Este before his suspension broke (though he should have won). Lucas di Grassi rounded out the podium which moved him into the championship lead by one point over Piquet.

Sebastian Buemi finished 4th. Bruno Senna went the longest in the first stint which allowed him to climb up to 5th from a 12th place start. Jerome d’Ambrosio came home in 6th. Antonio Felix da Costa continued his streak of scoring points in races he finished with a 7th. He’s finished four of five races and each was in the points. Jaime Alguersuari was the lone Virgin car scoring points in 8th. Surprisingly, Dragon Racing was the only team to score double-points this weekend with Loic Duval putting the second Dragon car in 9th in the team’s home race. And Stephane Sarrazin rounded out the points in 10th.

In the better late than never category, the FIA has suspended him from competition for two years after testing positive for a banned substance.

The French driver was replaced shortly before the Punta del Este ePrix with the reason not immediately known but we later found out that he tested positive for cocaine. As a result, the FIA Anti-Doping Committee stripped Montagny of his 15th place finish in the Putrajaya ePrix.

The two-year competition ban, which was included as something of an afterthought in the story on the Formula E website, will keep Montagny out of motorsport until December 23, 2016. That won’t spell a certain end to his career because he’ll be at the tail end of 38-years-old so he’ll have some time to get back into sports cars or touring cars before his racing days are behind him. As it stands, he’ll have to work hard to get back even that far.

For the first time in Formula E history, all the drivers who participated in the previous round of the championship started the next round. That is to say that everyone who raced in Miami also raced in Long Beach. 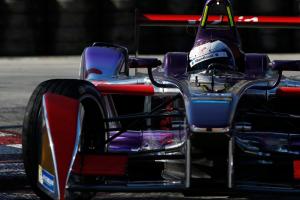 As I’ve said a few times before, while this should be non-story for a racing series, the game of musical chairs that is the Formula E grid makes this look like a bit of a second-class championship. Keeping a consistent grid can only help the series grow as fans can cheer for drivers instead of an environmentally friendly racing series.

That being said, there is already some silly season news. While China Racing is throwing piles of resources at the 2015-16 season with rumours of engineer hires and plans to run a dual-motor configuration next year, it looks like their lead driver, Nelson Piquet Jr., is looking elsewhere. He’s reported to be considering a move to Virgin Racing to replace Jaime Alguersuari for Formula E’s second season.

Having completed the Asian portion of the series in the first two races and the Americas leg with these last four ePrix, the next round of the Formula E Championship brings us to another part of the world. In five weeks’ time, it’s the start of the final leg of the season which is the five round European portion of the season. That kicks off with the Monte Carlo ePrix.

Like the Long Beach ePrix, the Monte Carlo ePrix will run on a portion of the circuit that is much more famous for petrol-powered races. If you’ve played some video games (the Dirt series comes to mind), you’ve probably played a shortened variation of Monte Carlo that goes right at Ste. Devote but not up the hill. The ePrix circuit will go down the hill at Ste. Devote to a hairpin at the Nouvelle Chicane (around the barricade that the chicane darts around) and rejoins the circuit from Tabac to the normal start-finish.

After six races, it just so happened to work out that the top six in the championship are all six of the race winners. As you go up in the standings, you’ll also see drivers with more podiums. I’m going to make a not-so-daring guess and suggest that Monaco will see Formula E’s first repeat winner in series history. I have my eyes on that di Grassi kid. The Abt team is poised to break through for another win having scored five podiums in six races between the two drivers.