Heading into this weekend’s Japanese Grand Prix, all the talk was about the weather and whether it would allow for the race to be run at all let alone to the 75% mark where full points would be awarded. The race made it four laps past the 75% mark, completing 44 of the scheduled 53 laps. When the race was red flagged and ruled complete, Lewis Hamilton was declared the winner but no one was focused on that.

A couple of laps prior, Jules Bianchi lost control in the deteriorating conditions and hit a car recovery tractor. As of writing, Bianchi is in an ICU in Japan after surgery for a head injury suffered in the collision.

On Lap 42, Adrian Sutil lost control in the long left-hand Dunlop Curve and spun into the tyre barrier. To recover his car, a crane tractor was deployed to recover Sutil’s car under double waved yellows. Unfortunately, Jules lost control of the car and collided with the recovery tractor.

Reports indicate that we was knocked unconscious by the impact and had to be extracted from the car. He was taken to hospital where a CT scan showed what the FIA called “a severe head injury” and he was immediately taken into surgery.

After the completion of surgery, he was admitted to the ICU of Mie General Hospital. While early reports indicated that Bianchi did not require respiratory assistance and is not on life support, just before posting, Sky Sports reported that Bianchi is breathing with the use of a respirator. A Radio Monte Carlo report saying Bianchi needed a second surgery last night has thus far proven to be untrue. 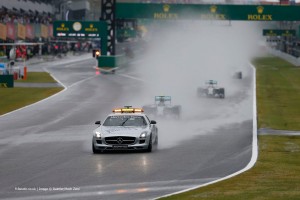 There was a race that happened on Sunday as well. Despite the poor whether, it got started on time but it wasn’t Nico Rosberg leading the field away from pole position though teammate Hamilton was right on his gearbox. It was the safety car that led the field away from the grid to start. They made it all of two laps before the red flag was deployed. The delay was about 25 minutes before cars rolled again. Well, almost all cars as Fernando Alonso was the race’s first retirement with an electrical fault.

The race got started after nine laps behind the safety car. Right after the safety car came in, Jenson Button pitted for intermediates and found himself lapping as fast as the two Silver Arrows which isn’t something we say very often this season. With Button’s speed, everyone else quickly jumped to inters. Hamilton was close to Rosberg heading to the stops but Rosberg had the preferential strategy as he was in the lead so stopping first allowed him to increase his lead. 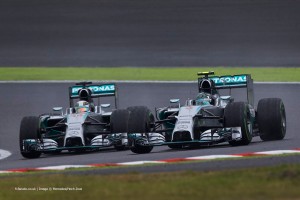 On inters, Hamilton’s car really came to life. He was able to get right up to the back of Rosberg’s car but was unable to get by. Once DRS was activated on Lap 25, it was only four more laps before Hamilton was able to use the extra speed to make a spectacular move around the outside into Turn 1. It wasn’t as good as Alonso going around the outside of Schumacher at 130R but it does get some points for being in the wet.

Shortly thereafter, the rain started again and quickly forced drivers back to full wets. In the midst of stops, Adrian Sutil got caught out at Turn 7, the Dunlop Curve, aquaplaned, spun off track and nosed it into the tyre barrier. Unseen by TV cameras, as the tractor was out recovering Sutil’s car under local yellow, Jules Bianchi spun into the back of the tractor. This resulted in the deployment of the safety car, medical car, recovery team and ambulance. The world feed commentary team hadn’t been informed about Bianchi’s crash so they assumed that it was for Sutil but the medical personnel were scrambled for Bianchi.

While under safety car, the race was red flagged. This was as a result of the deteriorating weather, to clear the track for medical personnel, to allow for the possibility that medical transport away from the venue would be required and because of the rapidly darkening skies.

Hamilton’s win was his 8th of the season and pulls him to ten points ahead of Rosberg with only four races remaining this season. Rosberg did his best to stay in the hunt with a 2nd but he needed to convert that pole into a win. Sebastian Vettel rounded out the podium thanks to his wet weather pace and setup.

Daniel Ricciardo came across the line in 4th. Jenson Button looked in contention for a podium thanks to being the first onto intermediate tyres after the safety car but the Red Bull pace was too much and left him in 5th. Valtteri Bottas and Felipe Massa didn’t appear too comfortable on inters but managed 6th and 7th respectively. Nico Hulkenberg’s car stopped a lap before the red flag was called but red flag rules turned the clock back so he was gifted 8th. Jean-Eric Vergne looks like a man who realizes there’s a new seat open at STR with his charge to 9th from 21st on the grid. And Sergio Perez rounded out the top ten.

This weekend saw the driver market turn absolutely on its head. The rumoured overhaul of the driver lineup at the future McLaren-Honda will have a massive domino effect on the field that will see most of the top teams change at least one of the drivers in 2015.

Ferrari all but confirmed that Fernando Alonso would leave the team after the season despite the fact that he’s apparently under contract through the 2016 season. That news came out just moments after rumours that Honda wants both Jenson Button and Kevin Magnussen out of McLaren after the current season concludes. The plan is for Honda to pay Alonso a king’s ransom of up to €35 million to get him to come back to McLaren.

That leaves Ferrari with one vacancy for 2015. It just so happens that we’ve been hearing rumours for years that Vettel signed a pre-contract with the Scuderia that would allow him to make a move for 2015. While he’s under contract through 2015, if Honda can buy Alonso out, Ferrari can buy out Vettel. So like Alonso to McLaren, all this is close enough to becoming a reality that we don’t really need the official announcement.

To replace Vettel, Red Bull got out front of everyone else’s announcements on Saturday (in Japan, Friday in Canada) by announcing that Daniil Kvyat will be making the jump from Toro Rosso to Red Bull after only a season in F1. Logically, Red Bull is going to promote another driver out of their Junior Program. The two top choices would be Felix da Costa (currently in DTM) and Carlos Sainz Jr. (current leader in FR3.5). With da Costa having seemingly moved on from the Red Bull family, the smart money tips in Sainz’s favour for 2015 and an extremely young STR driver lineup.

This also makes it hard on Hamilton and Rosberg if one of them want out of Mercedes. There are two desirable seats left. They could go to Force India which is a solid mid-pack seat or they could play a certain second fiddle to Alonso. Fernando probably wouldn’t let them in the door and Honda wouldn’t want to upset their golden boy. That means any Mercedes departing driver has to go to Force India or hope for the buyout/retirement of either Massa or Raikkonen to take their Williams or Ferrari seats.

So what’s rumoured to the point of near confirmation and contractually confirmed for 2015? Here’s a makeshift chart (bolds are new for 2015).

Speaking of Caterham, they’ve had an interesting week. While all the required equipment and personnel had already made the trip from Leafield to Suzuka for this weekend’s Grand Prix, the factory was paid a visit by the bailiffs.

The bailiffs visited Caterham on Friday and seized a number of items at the factory including a test car, car parts that were reportedly headed to Japan for this weekend’s Grand Prix, steering wheels, wheel and pit lane equipment. The items are being put up for auction on www.thesheriffsoffice.com.

Caterham’s owner/entrant 1Malaysia Racing Team issued a statement confirming the visit but denied that this action would have any effect on the team’s ability to continue competition. Scuttlebutt in the paddock suggest an unhappy supplier (or suppliers) may have taken legal action over money owed by the team.

Caterham’s appearance at the Singapore Grand Prix was in question right until the start of the weekend because Pirelli was withholding tyres until Caterham paid them amounts owing the tyre manufacturer. It looks like this isn’t a one-off problem for the team.

So all those rumours about the whole of the paddock expecting Caterham to not make the 2015 grid look increasingly likely to be true. I’d rant about how broken the current prize structure is in trying to grow the sport but you’ve heard it enough times by now. We aren’t going to keep a full grid in Formula One if some of the teams aren’t getting a share of the hundreds of millions of dollars in revenue that the sport brings in. You’re telling me that F1 can’t be setup to give £10 million to everyone and add performance prizes above that for the top ten? It’s either that or make it a ten-team grid.

The next round of the 2014 Formula World Championship is next week. Scheduling in Formula One doesn’t make sense sometimes. Given all the issues that the likes of Malaysia and Japan have had with heavy rain affecting the ability to run a race, you’d think those races would get moved but no. You would think that two races a third of the way around the world on consecutive weekends would be a logistical and physical nightmare on the teams but that’s completely irrelevant when there’s money to be made.

That next round of the Championship is the Russian Grand Prix at the Sochi Autodrom. Yes, that’s the same Sochi that hosted the 2014 Winter Olympics. The circuit will be like what the Korea International Circuit was supposed to be with a combination of purpose-built racing circuit and public roads. While the Korean circuit was also supposed to play host to a commercial and industrial complex on the grounds of the track, the Sochi Autodrom will run through the Olympic park on roads going by the medal plaza, figure skating arena, curling stadium, speed skating oval and the hockey arena.

Though we’re going to a new circuit, the outcome is likely to be the same. It’s going to be a shootout between the two Mercedes teammates as they fight each other for the World Drivers’ Championship. With the advantage now ten points to Lewis Hamilton, the pressure is on Rosberg to get up to speed faster than Hamilton and carry that advantage through the weekend.

There is one thing going in Rosberg’s favour this weekend. Street and low-grip circuits are where Rosberg has a clear advantage over Hamilton so far this season. This may be the last circuit where we know that Rosberg will have a clear advantage walking into the circuit on Friday. He needs to take full advantage to stay in the championship hunt.