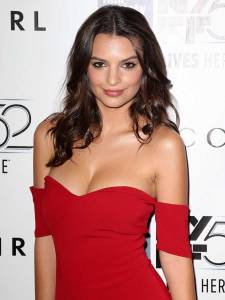 I don’t know about you guys but summer kinda sucked here in Northern Ontario. Last week had sustained good weather and temperatures above 20° which was so exceedingly rare during summer proper that I’m not sure it actually counts as summer. And just like real summer, last week’s reprisal seemed unusually busy so sorry if I’m a little lacking on longer form content this week.

Anyway, here’s Emily Ratajkowski who is apparently an actress now.

John Oliver may not want you to believe this but Last Week Tonight is doing some of the best real journalism on TV. (The Daily Beast)

The Republicans would support sending troops in to fight IS but the majority of the American people don’t. With midterms coming up, it’s not a good time to politic on policies opposite to what the people want. (Politico)

If you have money in Russia that you want to take out of the country, get on it fast. Their economy ministry is looking into capital controls to stem a cash outflow that could top $100 billion this year. (Bloomberg)

Fun fact: The world’s first genetically engineered children will be graduating high school this year… assuming they weren’t modified to be super smart and skipped some grades. (Tech Crunch)

Bill Simmons’ three-week suspension could be the straw that breaks the camel’s back. Simmons’ relationship with ESPN is tenuous at best given this punishment, a lack of support from older executives and Bill getting some of the blame for the poor performance of FiveThirtyEight. He might be out within the next twelve months. (The Big Lead)

Phil Mickelson comes off as a nice guy but he was very passive-aggressively critical of Tom Watson after the Ryder Cup that no one knew was happening. (Wei Under Par)

Brooklyn’s Barclays Center was never built as a hockey arena but that’s not stopping the New York Islanders from moving in next year. The problem is that it’s comically not built for hockey. (The Hockey News)

It’s been a while since we’ve heard from Amy’s Baking Company but co-owner Sami is threatening customers again. This time, the man who referred to himself to Gordon Ramsay as “the real gangster” brandished a knife at a patron. (TMZ)

Andre 3000 disappeared from public life for seven years? That explains why there hasn’t been a Tropic Thunder 2. (Billboard)

This weekend’s Family Guy / The Simpsons crossover came off as a big deal not just because it was a combination of Fox’s two biggest animation franchises looking for one final big score beyond their best before dates. The art of the TV crossover episode has long since disappeared from the network TV landscape. (Warming Glow)

Since I did a Botchamania post yesterday, why not have the greatest Botchamania video ending of all-time. It might be the best YouTube video of all-time actually.