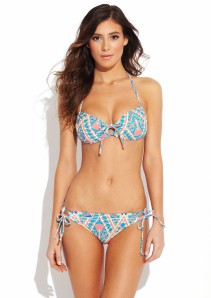 Well, Canada is still talking about Doug Ford taking over for Rob in the Toronto mayoral race. I don’t think Dougie has a shot but it would be interesting at the Ford homestead in 2017 and 2018 if Doug is the mayor and Rob wants the job back. If you’re not talking about Toronto politics, chances are you’re talking about the sad state of the NFL which seems to get worse daily.

And now, it’s time for us to do the links. Let’s kick things off with Mexican model Alejandra Guilmant.

Some people were willing to write-off the Liberal surge as a Justin Trudeau honeymoon. Now, the Liberals appear to be back and a threat to Conservative dominance. (CBC News)

Doug Ford was expected to be the brains behind Rob Ford’s mayorship. Instead, his been more hindrance than help. That doesn’t bode well for his candidacy. (The Globe and Mail)

And Doug’s candidacy for mayor wasn’t a last-minute plan thrown together to keep the Mayor’s sash in the family. It was implemented at the last-minute but Rob’s drug and alcohol issues meant this contingency plan was in place for months. (National Post)

The Palin family party brawl story got some details filled in by witnesses. As one witness put it: “It was a really nice, mellow party. Then it turned into the Jerry Springer show.” (AmandaCoyne.com)

I know that “double jeopardy” is a thing in America but I think that a jury might just try to work around it the next time they see George Zimmerman. They did it to OJ, after all. The man who made Florida’s Stand Your Ground law an international controversy is in trouble with the law again after threatening to kill a fellow motorist. (Associated Press)

An actress was mistaken for a prostitute and she alleges it’s because she’s black. (Mic)

The National Football League expects one-third of its players to feel the long-term effects of brain trauma. These billionaires just can’t catch a break. I do feel bad for the players being led to the slaughter for said billionaires. (New York Times)

That type of story might be a lot more prevalent now. The NFL used to have its preferred NFL news reporters / spokesmen in line but TMZ breaking the Ray Rice story wide open might have jilted those favourable reporters away from towing the company line. (Slate)

How much is Under Armor’s jersey deal with Notre Dame athletics worth? In excess of $90 million. It pays to be the Toronto Maple Leafs of college football. (New York Times)

TNA Wrestling might not be dead but it might be in a figure-four leg lock and ready to tap. Just how did it get from plucky upstart to fighting for survival and why do the wrestlers still believe in the product? (Grantland)

The HBO 24/7 series about the NHL’s Winter Classic is dead but a very similar series is planned for Epix and will expand to include a Stadium Series game. (ESPN)

The ever-growing Gawker Media empire is getting some cool new offices. I guess that’s what 80 million unique visitors in the month of August will buy you. For the sake of comparison, we did about 0.02% of that in August though our best month was about 0.23% of that. We’re kind of a small site but at least we’re financially sustainable… Even if over half of you use AdBlock…  (Recode)

In his latest commentary about the state of the NFL, Keith Olbermann gives the NFL some much-needed advice. If Adrian Peterson plays on Sunday, the league’s sponsors could and maybe should walk out on them.