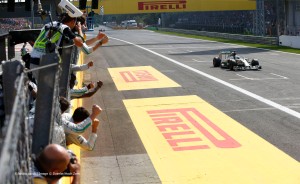 Regardless of the drama of the Belgian Grand Prix, this season has been all about the battle of the Mercedes teammates. Nico Rosberg might be leading the championship right now but he still has fewer wins than teammate Lewis Hamilton. He also has fewer retirements than Lewis which is why he’s in the Championship lead.

But that doesn’t mean that Rosberg is untouchable. Just because luck and speed has been on his side for most of the season doesn’t mean that the championship is his. All it took was one big slip up for Rosberg to throw away the lead of this race and hand momentum back to Hamilton.

While Hamilton started on pole with teammate Rosberg alongside in second, they didn’t make it to Turn 1 in that order. In fact, they hardly made if off the grid in that order. Hamilton had a terrible start and fell from 1st to 4th before they reached the braking zone for Turn 1. Rosberg ascended to the point with Kevin Magnussen in second having made a hero start from 5th.

They didn’t stay in those spots for long. While Magnussen had Mercedes power, he also had McLaren aerodynamics. That allowed 3rd place Felipe Massa to get by him in the second chicane with Hamilton following him right through. While Rosberg was able to streak away from the McLaren, the Williams and the other Merc were faster than him and closing the gap. They got within about two seconds before Hamilton was able to dispose of Massa and set off in solo pursuit.

What made the difference in this race was the tyres. Rosberg and Hamilton were on similar strategies. Nico had the leader’s preference when it came to strategies and pitted one lap before Hamilton. Normally, that would hand the race to Rosberg and the undercut on the pit stop certainly allowed him to open that lead. However, Hamilton just had the tyres working better than Rosberg.

When Hamilton was able to close the gap down to about two seconds, he was told to back off to save his tyres for a later passing attempt. He kept the hammer down and was able to force a mistake. With Hamilton closing in on DRS distance, Rosberg outbroke himself into Turn 1 and ceded the lead to Hamilton. It was a lead the Brit would never relinquish and never be in threat of losing.

Further back, Daniel Ricciardo was putting on a show for the fans. The only other driver to win a race this season was never in contention for the win but that doesn’t mean that he didn’t put in the best drive of the day. He started in 9th, fell out of the top ten off the start and used a long first stint to his advantage in the second stint. He quickly clawed through the field with spectacular overtaking moves, faking out other drivers to open up the door, and made it to 5th by the end of the race.

Hamilton’s win is his sixth of the season but still leaves him 22 points behind his teammate in the World Drivers’ Championship. With six races left and his teammate’s superior reliability, he can’t afford any mistakes at this point. Rosberg finished in second to only lose 7 points of his championship lead. Felipe Massa rounded out the top three with his first podium for Williams and to send the Tifosi home happy since he’s an adopted Ferrari man from his lengthy tenure at the Scuderia.

Valtteri Bottas finished fourth and was able to pass Fernando Alonso in the points standings after his retirement. Ricciardo finished 5th as the highest non-Mercedes finisher in the field. Teammate Vettel kept the two-by-two theme of the day going in 6th. Sergio Perez finished 7th. Jenson Button crossed the line 8th. Kimi Raikkonen capped off a disappointing day for the Scuderia on home turf in 9th. And Kevin Magnussen scored the final point after a five-second time penalty dropped him from 7th to 10th.

Could the end be near for the Mercedes duo of Rosberg and Hamilton? If you ask McLaren chairman Ron Dennis, there will be one new man in a race seat for the Silver Arrows squad in 2015.

In an interview with the BBC, Dennis said, “No-one could have predicted the tension within Mercedes-Benz. We can imagine a range of scenarios that could see one of their drivers on the market by the end of the year.”

Normally, I would write-off the comments of another team boss as wishful thinking because why wouldn’t he want one of the two back running alongside either Hamilton or Magnussen. However, if there’s one man in Formula One who knows about the combustibility of two #1 drivers going for the title, it’s Ron Dennis.

He saw Senna and Prost implode during their tumultuous partnership in the late ’80s while he saw the fight between Hamilton and Alonso in 2007 cost the team a Drivers’ Championship that went to Kimi Raikkonen and Ferrari.

While Dennis is the first prominent member of the paddock to come out and float this possibility, it’s not like no one has considered this scenario before. Personality clashes were considered a possibility when Button signed with McLaren and Lewis joined Nico at Mercedes. Maybe he needs to be that #1 driver and a return to McLaren, in a very Alonso-esque fashion as he made the jump from Macca back to Renault for a couple of seasons, would be in the best interests of his career and state of mind. Add to that the fact that Button’s contract is up at the end of the season and the quick opening is at Woking.

Or course, that begs the question of who Mercedes would be looking at as a replacement. I say this a lot but there’s this Hulkenberg fellow who isn’t too bad of a racecar driver.

Speaking of big team changes, rumour has it that a major change is coming to Ferrari. Reports indicate that Luca di Montezemelo, the long-time president of Ferrari, is due to step down very soon. 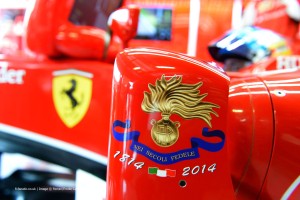 The fallout from his resignation/retirement is the interesting part. It’s expected that the cabinet reshuffle at Ferrari would see current Scuderia team principal and former Ferrari North America CEO, Marco Mattiacci, return to the road side of Ferrari. The vacancy at team principal of the Scuderia would be taken over by none other than Ferrari’s legendary former technical director, Ross Brawn.

There are two potential problems with this possibility. 1) Brawn says he’s retired though I doubt that he’d turn down a return to Maranello. I’d imagine most people in F1 would go for that. 2) It would be hard to believe that Mercedes didn’t include some sort of non-competition clause as part of Brawn’s contract or as part of their purchase of his shares in Brawn GP.

Still, Scuderia Ferrari has been in a state of competitive flux since the dream team of Brawn, Jean Todt and Rory Byrne broke up and Brawn’s return to the team could be the shot in the arm that it needs. After all, he did a pretty good job at Ferrari the first time, saved Honda to turn it into a World Championship team and left Mercedes in good shape for their title run this year. He might be retired but Ross Brawn still has it.

In other team news, all hell appears to have broken loose at Caterham this season.

During the few short months that the Swiss and Middle Eastern consortium of investors have owned Caterham F1, it hasn’t been smooth sailing. A number of employees were dismissed to cut costs and they are now suing the team for wrongful dismissal and a lack of severance pay. Kamui Kobayashi has been shuffled into and out of the lineup at Belgium and is expected to again in Singapore.

Now, team principal Christijan Albers is leaving the team after two months in charge citing “personal reasons.” In a statement, he said he wanted to spend more time with his family. Whether this is actually a matter of Albers jumping or the investment team pushing him because they wanted results fast hasn’t been discussed yet. Considering how desperate the team is to make the top ten spots of the World Constructors’ Championship, I doubt the investors are willing to sink their money into the long game. Rumour has it that the investors haven’t been coming through with the funds Albers requested for the team so maybe it is a jump since he wouldn’t want to be scapegoated for the team failing because of lack of funds.

Reportedly, the paddock is all working under the assumption that the new money injected into Caterham won’t keep it afloat for the 2015 season. Unless the team can score a top ten in the Constructors’ Championship and pick up prize money, it sounds very unlikely that there will be 11 teams on the grid next season.

Of course, this also should illustrate the lunacy of Bernie’s prize distribution structure. While it’s nice that teams are incentivized for performance, the prize pool makes it damn near impossible for anyone not in the top ten to be viable in F1. Maybe it’s time that F1 look at a more balanced distribution from top to bottom so that the small teams are getting some help to survive. After all, fuller grids make the show look better.

With the European portion of the season concluded, it’s time for everyone to hop on the plane for a series of six flyaway races over ten weeks to round out the 2014 Formula One World Championship. The first of those races is in two weeks’ time as the stars of F1 race under the stars and the bright lights of Singapore.

When looking for proxies for Singapore, I look at races like Monaco (a street circuit), Canada (a partial street circuit) and Hungary (where passing is optional). Two of those three races were won by Daniel Ricciardo but we have to be honest and admit that luck played a part in his victories this season. Mercedes reliability woes helped him in Canada while changing conditions played into his hands in Hungary and Belgium.

So that leaves us with the two Mercedes boys. Assuming they (or the team) don’t do something stupid, this race would seem to favour Rosberg because of his superior record on street circuits. With the possibility that double points in Abu Dhabi could play a factor in the championship, he needs to put all the distance he can between himself and Lewis.