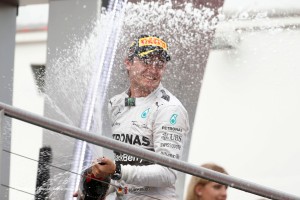 It may have been a poorly attended race and the slowest dry weather F1 race at Hockenheim but that didn’t mean that the home fans didn’t go home happy. Despite the various controversies during the run up to the race, it was still home country driver Nico Rosberg who sent the fans home happy by dominating the German Grand Prix.

I don’t want to say that the race was over before it started but this one ended on Saturday when Lewis Hamilton suffered a break failure heading into the hairpin in the stadium section. Under braking for the turn, his car suddenly swapped ends and sent him pirouetting into the tyre barrier.

He switched brakes from Carbon Industrie to Brembo on Saturday morning and quickly suffered a failure in Q2. Mercedes wanted to change Hamilton back to CI for the race but that could have resulted in Hamilton having to start from the pitlane. Instead, the change was allowed for safety reasons so Hamilton started P20.

Not that starting from the pitlane would have changed anything for Hamilton. That’s because there was a safety car called before all the cars exited turn one. Felipe Massa was tagged by Kevin Magnussen and the result was a Williams on its lid. Massa blamed Magnussen for it but the stewards and experts called it a racing incident. If it happened at any point but the start, the hue and cry would have been that Magnussen is dangerous and an attempted murder. Apparently the start is conducted under a special code of driving conduct.

The story of the race was Hamilton’s charge up the field. He didn’t have too much trouble dispatching many cars. For a portion of the race, he followed Daniel Ricciardo through on passes as he tried climbing through the field after losing several spots after avoiding action for the rolling car of Massa.

Hamilton’s charge could have been aided if not for a pair of missed safety car opportunities. With 20 laps to go, Daniil Kvayt brought his Toro Rosso to a stop on fire. It took a bit for a marshal vehicle with fire extinguishers to arrive but it was long enough that commentators thought it wouldn’t be a bad idea to deploy a safety car.

The big safety car moment was when Adrian Sutil spun on the front straight with 15 laps left and parked in on the right side of the starting grid. Marshals had to run across a live track to retrieve the car because marshals in the pit lane next to the car weren’t willing to run onto a live track to rescue the car. Hamilton pitted far too early to switch to super softs for the final stint because everyone expected a safety car. Instead, he had to nurse his tyres home and had to settle for a charge from 20th to 3rd.

Rosberg was so dominant en route to his win that I don’t think that he relinquished the lead once all day. Valtteri Bottas finished 2nd for the second consecutive race and will be looking to improve on that in his de facto home race next weekend. Hamilton’s 17 place climb probably earns him drive of the day but it also leaves him 14 points behind Rosberg.

Sebastian Vettel led the non-Mercedes runners home in 4th. Fernando Alonso crossed the line in 5th. Daniel Ricciardo probably would have led the challenge against Mercedes engines if it wasn’t for avoiding action in Turn One. Instead, he ended up 6th. Nico Hulkenberg is still scoring points after getting six more for finishing 7th. Jenson Button came home in 8th. Kevin Magnussen led the lap down cars in 9th thought I doubt Phil Massa is happy about that. And Sergio Perez rounded out the points scorers in 10th.

Heading into Germany, there was talk that Mercedes could be under threat thanks to a mid-season rules change. The FIA banned front-to-rear inter-connected suspension (FRIC) starting with the German Grand Prix.

The idea behind FRIC is to act as a self-leveling method for the car. Under the various forces a car is put on while in motion, the one that the teams use FRIC to control the most is the pitch of the car.

Under braking, the car wants to pitch forward and close the gap between the nose and the ground. The teams want to keep the nose down and rear wing up as much as possible to maximize downforce. The change in pitch would mean running the front higher than ideal for downforce. What FRIC does is allow the teams to run low front ride height without scraping the front wing or splitter off the ground under braking. It’s also why you seldom see Formula One cars pitch and roll under braking and turning like your road car does.

Coming into this weekend, just about everyone was claiming that they would be adversely affected by the change. Mercedes was said to have among the most advanced FRIC systems on the grid with Lotus having used the system for seven seasons. On the other hand, McLaren was supposed to have among the least sophisticated systems at the front of the grid.

While I don’t think we saw much of a disadvantage for Mercedes, McLaren looked better this weekend than in races past. I’d like to make an assessment of Lotus’ relative performance but they’ve been pretty poor this season to begin with so who can tell if this made him worse.

Of all the controversies in Formula One about rules and driving, the biggest one of the weekend was over Nico Rosberg’s helmet.

The German driver was going to run an image of the World Cup on the top of his helmet to celebrate the national team’s victory last week in Brazil. However, FIFA quickly intervened and told him that the World Cup was their intellectual property and they wouldn’t let him use it. It seemed rather odd since Rosberg and Mercedes weren’t going to use the World Cup imagery anywhere but the helmet in the race so it wasn’t like they were making money off it. Giancarlo Fisichella and Jarno Trulli were allowed to use the World Cup on their helmets in 2006 without complaint, after all.

Well, that’s all because of who was doing the complaining. Reports out of Germany indicate that it wasn’t FIFA who initiated the complaint but Hyundai. The Korean budget car manufacturer (I can say that because I rented a 2009 Sonata and listened uncomfortably as the door trim crunched and deformed when I tried kicking the snow off my boots) seems to have not wanted a competitor to be anywhere near the World Cup so they filed a complaint to get the trophy off of the Mercedes driver’s helmet.

Normally, I’d probably give out about getting the lawyers involved in something so harmless. However, I can understand why FIFA are doing this, if they don’t protect their intellectual property now, they may run into troubles in the courts later if someone tries something like this that they don’t want to. Hyundai complaining, on the other hand, I have no time for. Try as you might to rebrand, first impressions account for everything. The first time I drove a Hyundai, all the bits and bobs felt cheap, it was underpowered, and the steering, brakes and throttle felt completely disconnected from the wheels and I’d rather drive around in winter in a kid’s tricycle than that Sonata. 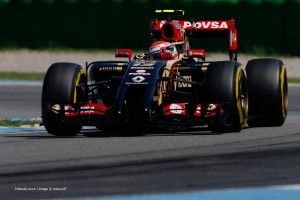 We’ve been covering the financial state of Caterham over the last few months but we haven’t talked about the worst-off team in F1 right now: Lotus.

The team’s performance has suffered greatly over the season because of the poor Lotus engine and the absolute lack of money to spend on designing and developing the 2014 car. Despite all the sponsors on the car, they’re still in pretty dire financial straits. It’s so bad that Pastor Maldonado has been re-signed for the 2015 season.

Remember when Pastor won the Spanish Grand Prix in 2012? Every F1 writer and commentator tripped over themselves to say that the win proved that Maldonado wasn’t just a pay driver and that he had earned his way into F1 on pace and blah, blah, blah, bullshit, bullshit, bullshit. Eliminate the win and Pastor scores 11 points less than teammate Bruno Senna that year. Senna also finished in the points twice as much as Maldonado that year.

The fact of the matter is this: Maybe Maldonado deserved a chance in F1 after winning the GP2 championship but he has done nothing in his time in F1, apart from scoring pole on a terrible parade route in Barcelona in 2012, that is indicative that he deserves to stay in F1. He has bought his way into F1 thanks to the Venezuelan government but hasn’t had sponsors or teams buy in on him. Maybe if Formula One wants to improve the show, they can get rid of scrubs like Pastor Maldonado.

It’s a quick turn around for the stars of the 2014 Formula One World Championship. The next race is next week as the teams go from an emasculated circuit to a track where the “racing” in racing circuit must, by law, be put in quotation marks because no racing actually happens there.

Yes, it’s time for the annual trip to Hungary for a short weekend around the twisty, dusty and dreadfully dull Hungaroring. I’ll give the track designers some credit. If you’ve played the game in a video game, you know that the first two turns and the middle sector are a challenge to do quickly and cleanly. That doesn’t mean it’s a track predicated to exciting racing… or racing at all.

Anyway, look for the two Mercedes cars to run up front barring some bad luck. This weekend would have fallen under bad luck for Hamilton so maybe he could challenge for a win if things go well for him. Of course, the only real difference between the two Silver Arrows has been luck. The luckier of the two drivers is going to win next time out.