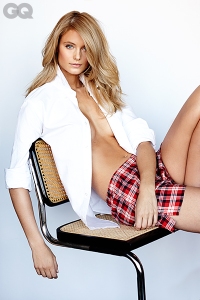 The one problem with doing linkdumps around holiday weekends is that the internet seems to shut down and it gets harder to find quality links. I’ve got a few links this week but not as many as usual. Hopefully, normal service will resume next time out.

For now, it’s time for the links. Since an American holiday caused these problems, let’s kick things off with Canadian model Kate Bock.

Good news, Toronto! Doug Ford says that Rob Ford is doing much better in rehab and is going to be a brand new man when he returns in a few weeks. (Globe & Mail)

A writer goes through his reasons for changing his mind about reparations to victims of slavery in America. (The Atlantic)

A recent study on the effectiveness of airport security showed that all those TSA scans decease terrorism on airplanes but diverts terrorist attention elsewhere. (Vox)

Citing the high costs associated with the program, salad bars at Boston schools are being replaced with junk food. Truly, this is the obesity generation. (Boston Globe)

The Seattle Seahawks waived their sixth-round pick after a physical discovered that he had a rare heart condition. They did the physical, signed him to a contract and then cut him so he was eligible for a $100,000 signing bonus. (NFL.com)

Ever wonder which MLB ballparks give you the best and worst bang for the buck? CNN knows. (CNN Money)

I didn’t mention this in yesterday’s Indy 500 recap but ABC’s affinity for WAGs really hurt the finish of the 500. (The Daily Gazette)

Top Gear host James May has bought an electric car. Well, we all knew that Clarkson wouldn’t be the first one to do it. (Transport Evolved)

Do you want to meet women online? Don’t use a picture of yourself with a tiger. Everyone else is doing that. (Wall Street Journal)

The legendary Paul Romanuk walks us through the Mixed Zone that players go through to do media interviews at big international events.

Remember Buff “The Stuff” Bagwell from WCW? Well, at an indie show in Cleveland this weekend, he busted out a Canadian Destroyer. That’s a frontflip piledriver who’ve never seen it before and let me tell you, it’s an amazing move.