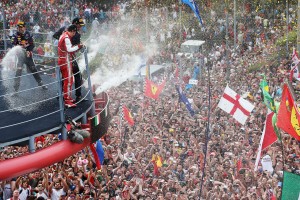 It’s time for the final part of our 2014 Formula One World Championship season preview. Having gone through the new rules, new drivers, team previews and power rankings for the season, it’s time to put it all together in our predicted results for the upcoming season.

As always, what we’ve seen so far isn’t exactly a complete picture of the upcoming season. Given that we haven’t really seen the cars in race conditions yet, we don’t actually know what will happen yet. Cars improve, teams troubleshoot and the drivers adapt to the condition. But based on what we do know so far, we do have a slightly educated idea as to who will be quick this year.

When Christian Horner warns that a Mercedes AMG F1 car can win the Australian GP by up to two laps, you wonder if there’s any point to a prediction. You also wonder if fans will complain about a team being boringly dominant when it’s fastest driver is a British hero.

I have the two Mercedes drivers on top of the World Drivers’ Championship with Hamilton’s superior speed and front of the field experience trumping teammate Rosberg. Based on driver pace, rather than car pace, Ferrari will be able to mount a challenge with F1’s two best drivers behind the wheel of the F14T. I don’t think that they’ll be close enough now to mount a challenge at the end of the year, though.

As for Old Four-Time, Sebastian Vettel, I have him in 7th. I think that might be a bit optimistic since we don’t have much reason to believe in Red Bull based on testing. The speed was there at times but certainly not the reliability. It doesn’t seem to be just a Red Bull problem, though. All of the Renault cars are in dire shape. Vettel might be the only combination of driver and car fast enough to score consistent points.

Speaking of possibly overrating, I have both Williams in the top ten. While they have a title sponsor in Martini, I do wonder how much help their, Felipe Massa’s and PDVSA’s buyout money will be in continuing development of the car through the season. Williams appears to be the #2 team on the grid in a return to historic form. The question now is whether they can maintain that form and I’m not sold on them yet.

I think that Mercedes has the power advantage so it’s just a matter of which Mercedes team is going to take that early advantage to the bank come season’s end.

Williams looks good now but I don’t think they’ll have the money to keep pace with developments. McLaren and Ferrari can catch up but are far enough behind right now that we could see a Brawn 2009 scenario where Mercedes AMG can get a big run at the start of the season and hold on through season’s end.

Red Bull is going to be too handicapped by their Renault engine and ERS reliability that I don’t see them sustaining pressure on the front of the grid. With only five engines and ERS units available before the grid penalties start. I do have enough faith in them to put them ahead of Force India who, like Williams, are likely to fall behind the top teams in the development race despite an early advantage.

My big surprise for the year is going to be Marussia. They’re the slowest Ferrari team but, in testing, that was better than most of the Renault teams. A little luck and reliability will score them some points early this season. I’m hoping for good things for them considering that we’ve gone four seasons without the new teams scoring a point.