2013 is another year filled with many big budget, largely forgettable films, but among all the releases, there are truly some gems out there. In fact, some of these films that made it onto the top 10 list caught me by surprise. Over the course of the year, I have caught several films on a weekly basis. In fact, I have lost count of all the ticket stubs that I have collected! Below is the list of the top 10 films I have seen this year.

First off, let’s go through some honourable mentions that didn’t quite make the cut. The films, in no particular order include Before Midnight, Stories We Tell, Much Ado About Nothing, American Hustle, Stuck in Love, Warm Bodies, Captain Phillips and About Time.

Keep in mind there are other ‘2013’ releases such as Inside Llewyn Davis or Her, which are released in January 2014 in Australia; therefore they have been left out of this list as I have not had a chance to see them yet!

So without further ado, let’s get started on the list!

I’m not sure many people would agree with me to include Pacific Rim in the top 10 list when there are so many other noteworthy films out there, but I have a soft spot for big budget giant robot action movies. The Jaeger-Kaiju saga from Guillermo del Toro is a huge step up from all the Transformers flicks that Michael Bay has produced so far. The film has some nifty special effects and grand visuals, which makes up for the simple storyline. Pacific Rim’s aim was to be a fun summer blockbuster film, and it delivered. The fight sequences were easy to follow and the tension was high. I felt engaged with the film from start to finish.

9. Blue is the Warmest Colour

Sure many people would describe this movie as a coming-of-age French lesbian movie with several titillating sex scenes, in which one of them was eight minutes long. Thankfully, despite the fact that the movie is now more famously known for the graphic sex scenes, the film is being recognized for the themes it involve. Abdellatif Kechiche’s film was a great examination of love and love lost. Actresses Adele Exarchopoulos and Lea Seydoux were immersed into their roles and perfectly displayed the emotional turmoil of falling in and out of love. 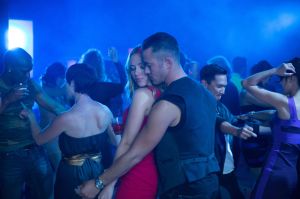 Joseph Gordon-Levitt makes a fine debut in screenwriting and directing in Don Jon. This film will make other rom-coms feel pale by comparison. It’s a smart look at how we consume the media and how that affects our daily life choices. Joseph Gordon-Levitt and Scarlett Johansson have wonderful chemistry and their characters’ agendas play off each other perfectly. The movie is funny and has enough heart for us to care about a dude who is pretty much a man-child who has a rather sleazy way of using the internet.

The end of the Three Flavours Cornetto trilogy was another fine example of sequels done right. Ok fine, it wasn’t really a sequel but the team of Edgar Wright, Simon Pegg and Nick Frost once again brought in another solid comedic film. Behind all the laughter though is a serious look at how addiction can cause emotional trauma and how it can affect the people around us. Pegg’s Gary King is not supposed to be a likeable character but he has enough charm to win us all over.

Fruitvale Station follows the last 24 hours of Oscar Grant’s life before he was tragically killed on New Year’s Day in 2009. The wonderful part of this film is that it did not try make Oscar seem like a perfect human being. He has made some questionable choices in life, but he is just another person trying to find a way in life and was hoping for a fresh new slate. Michael B. Jordan continues his string of impressive performances and this film was the perfect platform for him to shine.

It seems as though everytime Alfonso Cuaron touches a film, it turns into gold. In Gravity, he brought his A-game once again and taking the space adventure into a whole new level. The stunning 3D visuals were a wonder to behold. There’s also that opening uncut 20 minute opening sequence, which is quite the impressive feat. The performances in the film were particularly strong as Sandra Bullock was pretty much the actor carrying this whole film. Her character’s raw human emotion, ranging from the pain and anguish to the drive to survive kept everyone at the edge of their seats for the entire duration of the movie.

This is the End is by far one of the funniest films released this year. Each actor played an ‘over-the-top’ version of themselves during the apocalypse. Despite the crude humour, it’s a smart hilarious film. The jokes never get old and I find myself rewatching it from time to time and still chuckle at all the comedic moments.

I always love a good coming-of-age movie and The Spectacular Now fits the bill. It is a deep and thoughtful movie. Not only does this film display the beauty of young teenage romance, but it also strikes a chord within all of us. In the film, Sutter (played by Miles Tellar) is a teen that doesn’t like to think about the future and is all about ‘living in the now’. It’s easy to want to stay in our comfort zone and never change, but as the world is changing around us, we can’t hide forever. The characters are engaging in this film and we can’t help but care for their wellbeing. The interactions do not feel like it’s been tampered by Hollywood as there were plenty of awkward silences and subtle emotions on display.

12 Years A Slave is a powerful, moving film that is definitely worth watching. The film is not an easy viewing experience. It’s so powerful and intense that watching it once is good enough because we never want to endure it again. Watching Solomon Northup get torn from his family and thrown into slavery is simply soul crushing. The performance from the entire cast is superb and it won’t be a surprise when the film starts sweeping the prizes during awards season.

The best film of the year, hands down, is Short Term 12. Often times I would go back to films and nitpick over the little details, but I have no problems with this film. I get so immersed into the experience, I feel as though I am a spectator or a fly on the wall just watching these characters in the movie interact. The performances from the cast were brilliant, and Brie Larson certainly deserves some recognition in this. It’s simply Oscar worthy, though she probably won’t be handed the award. It’s easy to turn this story into a weepy schmaltzy movie but Destin Daniel Cretton has made a film that is heartbreaking yet uplifting at the same time. It ticks all the right boxes and I will find myself viewing this over and over again. If you haven’t seen this movie, I definitely recommend you go check it out.