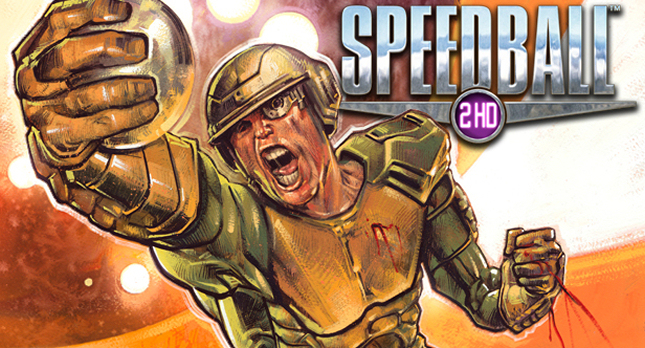 With all the retro remakes of classic games have been coming out, it was only a matter of time before I reviewed one of them here. I had never played the original Speedball games when they were released on the Atari ST (and the dozen or so other platforms it was also available on) but given the lack of sports games on PC, I thought I’d give it a try.

All that ended up happening was me questioning the need for HD remakes of classic games.

For the uninitiated, Speedball is a sport that’s a futuristic hybrid of handball, hockey and rugby. I was watching a bit of The Running Man earlier in the week and people in the 1980s really thought that people would want to watch a lot of hyperviolent activities for entertainment in the future. Well, we’re only six years from The Running Man’s setting and we aren’t close to watching prisoners in an escape or die TV show. That doesn’t mean that a sport close to Speedball won’t happen in the 24th century given how lax the NHL is getting about violent play.

Anyway, in Speedball, there are four ways to score. You get ten points for a goal. Hitting a star marker on the wall or a bumper in the middle of the playing surface is worth two points. And knocking out an opposing player is worth ten points. You’d think that scoring would give you the most points but I find that knockouts are the easiest to come by. Unless you tackle the goalies, which is fair game, scoring can be a bit difficult as the opposing goalie plays like Dominic Hasek at his very best. Your goalie is a bit like Hardy Astrom, the Swedish Sieve.

The controls seem like they’re straight out of the original. It’s a fine balance making an HD remake of a cult classic. Gaming has come a long way in the 20+ years since Speedball 2 first came out so integrating some of those changes would certainly improve the game. On the other hand, people playing for nostalgia would probably be over the moon if one of their favourite old games just worked on their modern PCs.

As I was starting to say, the controls feel a bit dated. In game, you have one button to use (besides the movement controls) which controls throwing the ball, if you’re holding it, or tackling if you don’t have it. Switching between players happens automatically so there will be times when you end up completely lost, confused and out of position when the game ninjas a control change under you. It would have been nice to have a change player button at your disposal or at least an option to do so.

Apart from those gripes, I feel as though the controls lack a bit of responsiveness. Tackling and shooting wasn’t as responsive as I’d like. Maybe that’s down to personal preference having played hockey games all my life but I often found that the last second pass/shot attempt usually resulted in getting tackled and turning the ball over. Aiming and shot shaping didn’t always work as expected with shots often ending up going high or in the wrong direction altogether. And the goalie only ever throws the ball straight ahead of him so if he makes a save, you will often just give the ball right back to the opposition if they don’t take it first.

The game features some local multiplayer but nothing online yet. That’s a shame because they AI can be pretty easy if the opposing team is rated at equal strength to yours. Even if they’re one rank higher, you shouldn’t have a problem toppling them once you figure the game out. It took me an hour or two to sort out the tricks of the trade but it isn’t too hard once you do. Unless the opposing team was rated as far better than mine, wins of 100+ points were the norm rather than the exception.

As for single player modes, there’s your standard single game mode. You can also do a single competition mode in which you select a league and a team and try to power them to glory in that competition.

The meat and potatoes mode is the career mode. You create a new team, start in the bottom division and guide them to glory. Your ragtag bunch can be upgraded by buying attribute upgrades in the gym or buying new and better players on the transfer market. Basically, it’s like a franchise mode in any other sports game. The management aspect gives the game some needed depth and place for you to sink some time while the promotion system of trying to get your team promoted in the Speedball world means that you’re going to be facing ever tougher opponents. 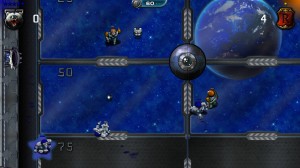 The graphics aren’t exactly what one would think of when they hear “HD” appended to a game title. They’re certainly better than the original Speedball games but that’s not saying much seeing as the games were released in the 80s. While the graphics have been improved so everything has a bit more of a proper three-dimensional look, the animations appear to be straight from the 80s. Given that the controls feel behind the times, I almost wonder if they took a lot of the source code from the original Speedball 2 and slapped a fresh coat of paint on it.

This doesn’t even get me to the fact that you wouldn’t get an argument from me if you called this a poor PC port. The options are rather limited. There are four resolutions to choose from and colour blind mode. That’s it. Colour blind mode isn’t in enough games but apart from that, it’s rather barebones. Mind you, you could say that about the whole game. It might have been enough in 1990 but 23 years later?

There are a few other major glitches in the game on release. If you change your team’s formation during the game, both teams’ defenses go mad and stop protecting the goal. Both teams try to push on the other goal but it’s more like hockey with the net empty. And there might be a transfer menu in the competition mode. I couldn’t tell you with any certainty because the game crashes every time I click on it.

The problem with modern remakes and re-releases of classic games is that aforementioned balance between nostalgia and modern gaming. I have no problem with Speedball 2 HD keeping the same visual style of the classic Speedball games. I do have a problem with issues with the gameplay and controls not being updates and the graphics options being non-existent.

I realize that there is such a thing as being faithful to the original but I’m not buying this game on GOG. It’s not a re-release of a classic game in its original form. It’s a modernized re-release of an old game but the only modernization it’s undergone is to allow it to run at 1920 x 1080.

If you loved the original iterations of Speedball, chances are that you’re going to love this and nothing I say will convince you otherwise. If you’re new to Speedball, it’s definitely a mixed bag. I might keep coming back to it when I want something quick to kill 10 or 15 minutes but I’d probably prefer any one of a dozen games before that. Having finished up my review, I can’t see much pulling me back in right away.

Speedball 2 HD was reviewed on Windows PC. Other remakes of Speedball 2 are available for Xbox 360, PlayStation 3 and iOS but are not the game reviewed here. Your impressions of the game may differ based on PC specs and nostalgia.