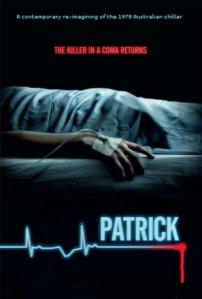 Unless you’re an Australian and/or a horror film nut, you probably won’t even know that Patrick is a remake of a 1978 Aussie flick. Despite following the usual horror movie tropes, Mark Hartley’s remake is moody, loud, unapologetic and a whole lot of fun!

Patrick is not a subtle horror movie. Every corner is filled a loud bang, scratch, clang, leaving the audience feeling a bit numb. Rather than going for the slow burn technique and letting the horror seep in, the movie skips straight into the loud jump scares from the get go, which sucks away from the shock value later on in the film. At least Patrick is an earnest homage to past films, so if you’re ever in the mood for creepy weirdos, evil doctors, and telepathic chaos and violence, then this movie is just for you.

Patrick is the titular character (played by Jackson Gallagher), who is a comatose man in room 15 of a facility that is conveniently located in the middle of nowhere. Despite the fact that Patrick is in a coma, he is definitely not ‘clueless’ when new nurse Kathy (Sharni Vinson) shows up. He communicates with Kathy through spitting and his telepathic abilities, but refuses to demonstrate them to anyone else. The research facility is run by Dr. Roget (Charles Dance) and head nurse Matron (Rachel Griffith). Dr. Roget is a success driven scientist trying to make a breakthrough with his comatose subjects, much to the dismay of everyone around him. His methods are questionable at best as he seriously crosses some ethical lines in his line of duty. Patrick is obviously an unhappy man and he eventually starts showing his displeasure with the staff at the facility through various unpleasant means.

During the Q&A for the film, it was revealed that certain actors like Charles Dance and Rachel Griffiths only had about 10 days to work on the film, but the final product does not indicate that at all. Dance adds another great role as a villain to his repetoire while Griffiths perfectly plays a damaged woman who has literally become a shell of herself. 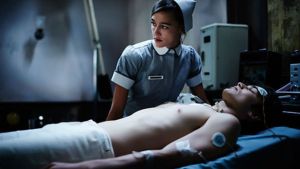 Sharni Vinson is slowly becoming the next scream queen. After her run in the home invasion flick You’re Next and the shark flick Bait 3D, it is easy to see why she is the new favourite for a leading lady role in horror movies. Despite her small frame, she comes off as a strong female protagonist that we can all root for. Kudos also goes to Peta Sargeant who adds a bit of light-heartedness to an otherwise gloomy dark film. Finally, there’s Jackson Gallagher. I have to say, it is quite unusual for a film to feature a lead that is almost motionless and devoid of any facial expressions and dialogue. The fact that he can still convey a sense of hostility through his unblinking eyes and cold demeanor is noteworthy.

All in all, the Patrick remake is miles ahead of the original film in terms of quality. This film benefits from a good cast, wonderful production design and a beautiful textured score. Also the pacing is spot-on, as there are no points in the movie where it felt like it was dragging on. Patrick does not bring anything new to the table, but at least it was a fun ride.