The most successful video game on the market right now is the Call of Duty series. Say what you will about the game’s lack of innovation and utter disregard for the single-player campaign, this is the most commercially successful game on the market. The last couple of years have seen gross sales of over $1 billion and units sold well in excess of 10 million.

As such, you could understand why everybody is looking to CoD for cues for their upcoming efforts. Just look at the new all-brown colour palette and gritty art style of Dead Rising 3 and EA turning Battlefield into an annual franchise. The thing is that Call of Duty’s success isn’t about how it looks or how often it comes out. It may come as a shock but there’s a simple but largely undiscovered formula that makes CoD a massive success. 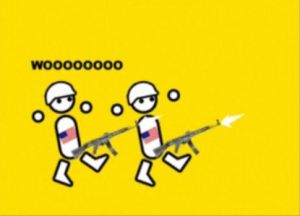 Yahtzee Croshaw has famously said that a game should be able to stand up on its single-player campaign. That’s a philosophy that I believe in when playing and reviewing games. However, that’s one that has never been a priority or strength of the Call of Duty franchise. In fact, just about every review of a modern military shooter notes a disappointing single-player campaign.

When you’re crafting your mandatory single-player campaign, a fairly bite-sized length of about 6 hours on normal difficulty seems ideal. You don’t want to allocate too much time or money to the single-player because that’s not a selling point of the game. Focus that time and money on the parts that will move units.

What I think you need from a CoD clone is a straight-forward, linear, action movie type of campaign. Basically, this needs to be reminiscent of summer blockbusters. If you have a fun little story, people are willing to overlook the fact that the campaign is short and linear. Add a challenging boss fight and a few spectacular set pieces. Toss in some snarky one-liners to give the player character some personality and you have a barebones single-player campaign that gives people something to do and enjoy when not on multiplayer.

Something that I didn’t realize until Jim Sterling pointed it out last week was that Call of Duty has never really been on the cutting edge of graphical fidelity of gaming. The two developers behind the franchise, Infinity Ward and Treyarch, have been using the IW Engine since 2005 with some incremental improvements along the way. With CoD: Ghosts running on an upscaled version of the two-year-old iteration of the IW 4.0 engine (last seen in Modern Warfare 3), it doesn’t look like we’re going to see a massive leap forward in visuals this year.

While we’ve come to expect cutting edge graphic from DICE’s Battlefield series and the Frostbite Engine and Crytek’s Crysis series running on its eponymous engine, they haven’t exactly set the retail world on fire. According to VG Chartz, at the end of May, CoD:Blops 2 sold about 23.7 million copies. Despite being out for 12 months longer than Blops 2, Battlefield 3 has sold 15.7  units or 8 million copies less than CoD. Crysis 2 is the highest selling game in the franchise but had only sold 3 million copies since March 2011.

While people are fairly excited about how good games look on the new consoles or on PC, the fact is that how a game looks doesn’t really translate to the success of the game. If that was the case, DICE and Crysis would have put half the industry out of business.

While we’re talking about graphics, the so-called modern military shooter colour palette of brown-on-brown isn’t a selling point. Look at how Dead Rising 3 is being accused of chasing the CoD crowd with its brown colour palette. Sure, the “gritty” look and colours of modern military shooters are so common that it almost seems like a cliché. However, I don’t think many people buy games because of the colours used in a game.

I’ll be the first to say that I’m not much of a multiplayer gamer so I’m not going to start pitching new or innovative multiplayer game modes for your Call of Duty clone. If you’re designing or building a game, you should probably be able to come up with something new without my help.

The meat and potatoes of the Call of Duty franchise is the multiplayer. People aren’t buying the latest edition of CoD to go through the token single-player campaign. They’re buying the game to play with friends, play against friends and pwn noobs. (Yes, I still say “pwn.” That’s the multiplayer I grew up with. You trash talked in a text chat. It was awesome.)

Call of Duty isn’t a social game in the Facebook sense of social gaming but it’s a social experience. The whole generic shooter genre is made better by being able to experience it with other people. That’s what makes Call of Duty so popular and the multiplayer portion of the game the part that is most heavily promoted in advertising.

Now, while I can’t give out ideas for game modes, I can tell you that there are some key focus areas for multiplayer developers, even if they can’t come up with the next great game mode.

The three pillars to focus on are level design, weapons and customization. If the levels are uniquely designed to that they can accommodate a variety of strategies, people will enjoy playing them rather than having one map where snipers are overpowered while the rest hamper all sniping efforts. A bunch of well-balanced weapons will give you a variety of ways to approach the game without the frustrations of everyone running with one OP gun which takes the fun out of playing against other people. And customization is half the fun of multiplayer. Crafting a unique look and loadout is part of that social experience that gives you another means of interaction with everyone else.

While it’s nice that Battlefield 3 released new multiplayer content for the 18 or so months that followed the game’s release, I can’t help but feel that Battlefield 4 will be a bigger success than BF3 against CoD if all those new game modes are available with BF4 at launch. If there’s more for people to sink their time into and have fun with, more people will pick up the game.

On the topic of additional game modes and multiplayer DLCs, I think that Mass Effect 3 had it right. The crew at BioWare Montreal did five expansion DLCs and issued them for free. That included 13 new maps which more than tripled the original offering, 40 new player characters (up from the original 24 characters), a new enemy faction, a new difficulty mode and a new challenge system. That wasn’t a small undertaking and I think most developers would have charged for all the changes BioWare offered for free. If you’re going to do add-on content, release it for free and supplement the lost revenue with multiplayer micro-transactions.

While everyone trying to make the next billion dollar franchise looks at Call of Duty for inspiration in terms of the art style, they’re missing the bigger reasons why CoD is the biggest game in the industry right now. Call of Duty is a multiplayer experience. It’s the same reason why Madden is so popular. It’s not for playing the franchise mode but playing with friends. When copying Call of Duty, developers just can’t seem to get that one important part of the game quite right.