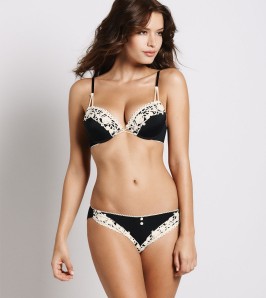 Well, this will be interesting. Getting featured on Freshly Pressed brought in many new readers who are probably expecting something a bit more political and well thought out. They’ve probably figured out that we only do the long read thing as more of an occasional thing than daily thing. Anyway, if you’re new to the blog, when I do linkdumps, I try to feature Canadians. For example, today’s linkdump starts with Canadian model Michea Crawford.

Mitt Romney called his donors in a post-campaign debrief. Why does he think he lost the election? Obama handed out “gifts” to the youth and minorities. In other words, he blames 47% of Americans again. (Los Angeles Times)

While executives at the now closed Hostess Brands blamed the union for driving them out of business, they might need to look at the mirror. This year, the increased executive pay by 80% while tripling the CEOs pay. (Think Progress)

Fox News president Roger Ailes says that the media isn’t doing a good enough job of ensuring that President Obama is held accountable for his decisions. He says the press is supposed to watch the powerful. However, his track record doesn’t show that he held the Bush administration accountable. (Gawker)

After the jump, where the GOP have been losing votes, sports on South Park and the Princess Bride on ESPN.

By the way, Romney and Karl Rove also blame the GOP Primary debates for making everyone involved look like a laughing-stock. (New York Magazine)

What really cost the Republicans the election? They haven’t been able to connect with minorities since the Bush administration. (Wall Street Journal)

In the 1990s and early 2000s, the NFL paid disability benefits to players who said they suffered debilitating brain injuries from playing football while the NFL publicly denied the link between football and health issues. This will make for an interesting precedent in that lawsuit. (PBS Frontline)

Jeffery Loria grenaded another team by trading all of the Miami Marlins’ decent players to Toronto. Loria alone isn’t to blame. Bud Selig let him stay in baseball after dismantling the Expos. (Yahoo Sports)

The NHL might still be locked out but Don Cherry is keeping busy. Grapes did a Q&A with the Globe’s James Mirtle. (The Globe and Mail)

Boston radio hosts Toucher & Rich did a little experiment. What would happen if people actually heard jokes that ESPN writer Rick Reilly thinks is comedy at a comedy club. The answer is painful embarrassment for all involved. (CBS Boston)

This week saw another epic instalment in With Leather’s sports on TV feature. This week was South Park. (With Leather)

The first part of Hulk Hogan’s lawsuit against Gawker over the sex tape didn’t go well. A judge didn’t grant an injunction to force Gawker to pull the video. (TMZ)

I’m pretty sure I’ve featured reviews of Guy Fieri’s new restaurant on the blog before. Now, the New York Times has its go and it wasn’t pretty. (New York Times)

And just to make that even more awkward, the New York Times held an event at Guy’s restaurant the day the review was published. (The Braiser)

By the way, Nintendo’s new Wii U console is being released today. Here are some early impressions of the console. (Kotaku)

Occasionally, ESPN does cool things. For example, a recent episode of NFL Kickoff contained a bunch of Princess Bride jokes.

Psy made a cameo appearance at a Madonna concert to prove that Madonna can’t dance. At least, I think that should put the final nail in that myth.