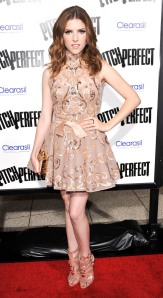 Welcome, my friends, to the show that never ends. The Entertainment Link-Off rolls on with me in place for Jackie this week. I promise that I’ll keep most of the politics out of it this time. The state of discourse in the US Presidential Election is bad enough that we all need a reprieve from the lies, mud-slinging and general bullshit at some point.

Anyway, it’s been an interesting week in the world of entertainment. Most networks chose to have their premieres this week so that means that primetime TV is only slightly less of a wasteland than it was during the summer. Hollywood is doing a bit better this week. Opening over the weekend are Looper starring JGL and Bruce Willis (yippee-ki-yay, motherfucker), Hotel Transylvania (which thankfully spares us from Adam Sandler in drag), Won’t Back Down and Pitch Perfect which stars blog favourite Anna Kendrick.

Next week marks the 50th anniversary of the James Bond movie franchise. It was on October 5, 1962, that Dr. No premiered in theatres. To honour the occasion, here’s a look back at 50 years of 007. (Vanity Fair)

If you like long reads, this is a pretty good linkdump for you. We have the Bond history above and a lengthy oral history of Cheers. (GQ)

Parks and Recreation started out its life slowly but now it is well and truly beating its inspiration, The Office, at its own game. (TV Overmind)

Chevy Chase is giving interviews about Community again. Dan Harmon might be gone but Chase doesn’t like his job any more. (Warming Glow)

Top Gear still has three more years of life in it after the BBC signed a new contract with the three presenters. More interestingly, the BBC bought out Jeremy Clarkson and producer Andy Wilman’s shares in the Top Gear commercial interests corporation. (The Hollywood Reporter)

NBC is desperate for new shows to draw eyeballs. They’re interested in a show about Thomas Edison fighting crime. Well, it can’t be a bigger disappointment than Elementary was after Sherlock. (AV Club)

Ahead of this weekend’s premiere of Looper, Will Leitch asks why we care so much about open weekend box office grosses when they don’t actually mean anything to the movie going public? (Deadspin)

George Lucas missed something while redoing his original Star Wars trilogy for the special editions. You can clearly see Carrie Fisher’s coke nail during Return of the Jedi. (io9)

Another news agency has been duped by The Onion. This time, it’s Iran’s leading Fars News Agency who thought a poll The Onion was reporting on actually existed. (Gawker)

Just for fun, here’s a look at the 10 creepiest NHL garden gnomes. They really will slap a team logo on anything to make some money. (Puck Daddy)

And now for something completely different. It’s a look at eight of the worst boyfriends in movies. (Unreality)

Let’s have a little fun with the YouTube videos today. First up, it’s the latest viral video you haven’t seen yet. It’s a scene from a 1973 Turkish movie that’s being billed as the worst movie death scene of all-time.

At some point, I’ll give up on this whole Gangnam Style thing. For now, here’s a Star Trek themed parody called Klingon Style. Yes, the lyrics are in Klingon.