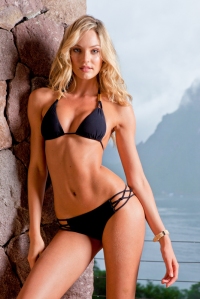 Alright, after the slightly failed late night link experiment, how about I make it up to you with Candice Swanepoel.

I mentioned this in the last edition of the Power Rankings. It’s the unwritten code of hockey finally transcribed. (Down Goes Brown)

The record for the longest hockey shootout was set last week by the Germans. A German league shootout went 21 rounds before they could figure out a winner. (With Leather)

On the one year anniversary of the Tiger Woods crash and associated fallout, here’s a look at some of the events leading up to the crash. (Vanity Fair)

After the jump, a Grey Cup conspiracy, the best inventions of 2010 and Jordan tells LeBron what he should do.

Justin Bieber was in Montreal the other night for a concert. Naturally, that prompted someone in the Canadiens PR department to ask Habs players what they liked most about Bieber. Some of the answers are pretty good. (Sportress of Blogitude)

Speaking of Montreal, the CFL’s Alouettes are saying there’s a league conspiracy in favour of the Saskatchewan Roughriders. Fortunately, Bruce Arthur is on the case. (National Post)

With the Heat coming perilously close to being a 0.500 team, is Pat Riley’s return to the bench inevitable? (Fox Sports)

Looking for a bizarre new sport to follow? How about cycleball? (Wired)

Speaking of bizarre sports, Warner Brothers is trying to cash in on the recent explosion in the popularity of quidditch. They’ve applied for trademarks for anything and everything possibly quidditch related including lingerie. (Out of Bounds)

After the slight controversy caused by the nominations for Spike’s Video Game Awards, here’s IGN’s Best of 2010 nominees list. Go Mass Effect 2! (IGN) By the way, we’ll have more coverage of Spike’s VGAs closer to the show date.

With Gran Turismo 5 coming out this week (we’ll have a review soon), let’s take a look at the visual guide to the racing game genre. (Kotaku)

The second episode of Top Gear USA is tonight. Last week’s wasn’t the best start they could have had but to help you get hyped for this week, here’s a behind the scenes look at this week’s big adventure. (Jalopnik)

Good news: We’re getting our own Fox News knockoff Channel. Wait, did I say good news? Well, maybe for satirists and other comedians. (Hollywood Reporter)

Want a new external hard drive for your computer but want it to look absolutely bitching? Then you might want this 1:18 scale DeLorean Time Machine with a 500 GB Seagate hard drive swapped in for a flux capacitor. (Engadget)

And how about more tech in the photo galleries of the day. First, it’s the Best of What’s New for 2010. (PopSci)

We’ve seen a couple of funny responses to LeBron’s “What Should I Do?” ad. Now here’s a mashup with a Michael Jordan ad.

And for shits and giggles, here’s a William Shatner duet of Total Eclipse of the Heart.