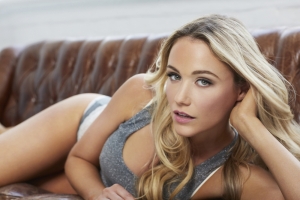 Prior to posting the ELO, I managed to catch X-Men Apocalypse. I gotta say, it doesn’t quite deserve all the knocks against it. The film is definitely not the best of the new trilogy but it’s far from being a disaster like The Last Stand. The CG seemed a bit wonky at certain parts but the performances were fine and the comedic beats still hit on the right notes. Anyway, that’s enough about the latest X-Men flick, it’s time to get on with the links. Gonna kick things off with Katrina Bowden just because she looks mighty fine in her latest shoot.

After the jump, Justin Lin may return to Fast & Furious, Daniel Craig definitely doesn’t want to be Bond again, all movie trailers look the same, Margot Robbie channels her inner American Psycho and Wreck It Ralph has plenty of mind-scratching questions for us all.

If you’re up for a good read, here’s a nice write-up on Star Trek Beyond director Justin Lin. The article also hints at a possible return to the Fast and Furious franchise later down the road. (Wired)

If you didn’t notice Daniel Craig phoning it in for Spectre, then this will give you a clear cut answer. He’s done with the franchise and has rejected big money to return as Bond. (Daily Mail)

Seth Rogen is a very hard working man. Not only did he executive produce Preacher on AMC, he wanted to play every single role on the show! Well… according to the parody trailer anyway. (Geeks of Doom)

Warner Brothers is in damage control and it may have found its own Kevin Feige (sorta) for its DC Film division. Geoff Johns has been tapped to co-lead the expanding DC cinematic universe. Despite the horrendous Batman v Superman, perhaps they might just correct course here! (Slashfilm)

You know the Marvel Cinematic Universe is disconnected from the Marvel TV shows when the folks on the TV shows start venting their frustration. Case and point, Chloe Bennett doesn’t really hold back on what she thinks. (io9)

Thor Ragnarok is really beefing up its cast members with the addition of Jeff Goldblum and Karl Urban. (Slashfilm)

Steven Spielberg is not a fan of virtual reality and thinks it can be the end of filmmaking as we know it! (The Guardian)

Jennifer Lawrence’s contract is up for the X-Men franchise, but she is open to the idea of coming back for more, but there is a catch. (Entertainment Weekly)

Under the hands of Greg Berlanti, it looks like the comic Archie is going very dark for the live action TV series Riverdale. (Vulture)

Seems like network TV is catching onto what the cable or online platforms are doing. Shorter condensed seasons are revitalizing their shows as well. (Variety)

CBS’ reboot of MacGyver looks like it could be a lot of fun. (The TV Addict)

Not surprising news of the day, folks prefer to watch TV on Netflix nowadays. (Shadow and Act)

The final trailer for Teenage Mutant Ninja Turtles is out and gives a better look at the villain Krang as he fights the turtles. The movie still seems very silly but at least the action set pieces look to top the first flick.

Here’s a mashup trailer for Avengers vs. X-Men. If only these Marvel properties could exist in the same cinematic universe! Until then, fans can only dream…

The CW might have another gem on their hands as the TV adaptation of Frequency looks quite comparable to the flick from 2000.

It’s a super-reel! Safe to say there might be a 4 night crossover this upcoming season for the superhero shows on The CW?

The green band trailer for Sausage Party isn’t as raunchy as the red band clip but the comedic beats are still on track.

At least we find out how Seal got those scars in the trailer for Popstar: Never Stop Never Stopping.

For those who had their doubts about Star Trek Beyond after the teaser trailer, have a look at the new clip since it feels more like the Star Trek that you would love.

You’ve seen all these trailers here. Well have a look at 11 ways all the movie trailers are the same.

The honest trailer for Wreck It Ralph asks some very important existential questions!

New track from Justin Timberlake is super catchy! Have a listen to Can’t Stop the Feeling.