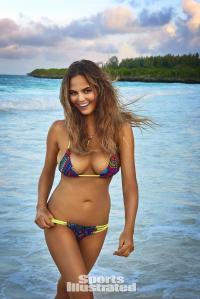 Well, it looks like we’re ever closer to a Presidential battle between Hilary Clinton and former Clinton supporter Donald Trump. This could be one of the most interesting or infuriating campaigns in recorded history. If you thought 2012 was painful, this one will be worse. At least it’ll provide a lot of fodder for links over the next few months.

Anyway, it’s Wednesday which means that it’s time for us to do the links. Let’s kick things off with Chrissy Teigen.

A reporter on the Trump campaign got tossed aside by the candidate’s campaign manager when she asked a question that they probably didn’t like. (BuzzFeed)

Why is Ben Carson backing Donald Trump? Because he just might have offered Carson a job in his administration. (Gawker)

The relationship between Donald Trump and Chris Christie reminds one columnist of Randy Savage and Miss Elizabeth. (Trentonian)

And then there were two: Marco Rubio lost his home state to Trump and has dropped out of the campaign. So if Rubio couldn’t beat Trump in Florida, he’s probably not in the running for the ticket, right? (The Hill)

A look inside the dollars and cents of the legal brothel business in Nevada. (The Street)

Contract law is a weird thing sometimes. You can accuse someone of rape and that isn’t enough to get a contract a second look in court. That’s what’s happening with Kesha right now. (Billboard)

A new book looks at how social media and selfie culture is destroying the American childhood. (Observer)

French’s ketchup has skyrocketed in popularity because of its use of Canadian tomatoes. Then Canada’s biggest grocery store chain mysteriously dropped it this week because it doesn’t sell well enough. And just as quickly, Loblaw’s is doing an about-face. (Global News)