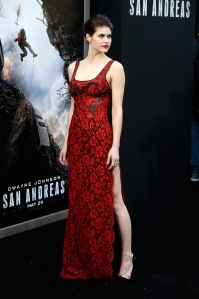 So after a lackluster Memorial Day weekend at the box office in North America, another big summer flick enters the competition this weekend. Dwayne “The Rock” Johnson stars in the latest disaster flick San Andreas. I’m sure it is good popcorn fun. From a critical point of view, it is certainly doing better than Cameron Crowe’s latest effort Aloha, which is now deemed his biggest trainwreck yet. Anyway, if you do end up seeing San Andreas, you can catch the red hot Alexandra Daddario in the flick as well.

After the jump, Tron 3 is dead, find out more on Independence Day 2, George R. R. Martin will not be writing for the Game of Thrones series again in season 6, Deadpool has wrapped filming but they still want Jackman, and check out an awesome 30 minute short called Kung Fury.

Everything you need to know about the cast and the story of Independence Day 2. (Slashfilm)

Curious about how much bandwidth Netflix manages to take up during peak hours? Find out here. (Variety)

The new Ant-Man poster shows the title character swimming in a sea of bullets. (Twitter)

While M. Night Shyamalan is striking out at the movies, he seems to be faring better in TV nowadays with Wayward Pines getting decent ratings and reviews. He is now contemplating on a series for Unbreakable. (IGN)

Here’s a look at why the leak of the Supergirl pilot is a good thing for CBS. (USA Today)

George R.R. Martin will pass on writing an episode of season 6 of Game of Thrones as he is most likely putting in extra time to finish his next book as soon as possible since the television show is going to eclipse his published works soon. (Collider)

Could the title of the Game of Thrones season 5 finale be a bit spoilerish? (Vanity Fair)

Looks like Fuller House will still have most of its original actors as Bob Saget and Lori Laughlin have signed on for the show. It’s just the Olsen twins disappointing the fans out there. (Screen Rant)

Given that all parties seem interested and if the schedules work, it would be pretty awesome for Hugh Jackman to make a cameo in Deadpool. (Uproxx)

The Marvel Studios and Marvel Television feud is ruining the experience for us all! (Screen Rant)

Fun fact. Despite finishing his run as Dr. House, Hugh Laurie can’t seem to shake off the limp that the character had, despite the fact he has not be playing the angry doctor for 3 years. (Inquisitr)

Well this video should at least bring a smile to your face. Dwayne “The Rock” Johnson led a wedding surprise for journalist Nick Mundie in the middle of his press junket for San Andreas. The result is pretty magnificent.

Ever thought to see a stoner-CIA agent action rom-com? No? Well have a look at the red band trailer for American Ultra starring Jesse Eisenberg and Kristen Stewart. It might change your mind.

Well… at least the Point Break remake has some really cool/ridiculous stunts.

Well this will give you an idea on making your own retractable claws like Wolverine.

The latest edition of Honest Trailers looks at Armageddon. Michael Bay’s last fun movie, which also turns out to be the cinematic equivalent to Taco Bell.