It’s not often that we get our hands on a preview version of a game but who am I to turn down a new experience. So, naturally, when Cyanide gave me an opportunity to take an early look at their upcoming RPG Aarklash: Legacy, I jumped at the opportunity and was pleasantly surprised with what I saw.

Let’s start off with a little background. Cyanide Studio is the group behind a number of different games, including Blood Bowl, Of Orcs and Mens, the Game of Thrones RPG and Pro Cycling Manager. It’s a very varied group of games that they’ve developed.

Aarklash: Legacy is a sequel of sorts to  Cyanide’s 2012 game Confrontation. I say “of sorts” because both games are set in the universe of Aarklash from the Confrontation table top game but aren’t really tied together in any of the official info for the game outside of the copyright blurb.

Like its predecessor, Aarklash: Legacy is an RPG that is very much reminiscent of the BioWare classics like Baldur’s Gate. The gameplay and some of the visual styling makes the inspiration apparent. Being a BioWare fan, I can’t say that I can fault their choice of inspiration.

The story so far is pretty standard based on the preview. The first act of the game is fairly linear with little in the way of different paths to explore, let alone decisions or branching story paths. We are promised some character relationship exploration in the full release but I didn’t see any on display here. If you focus on story as a reason to play games, you’ll want to wait for a full review.

The dialogue isn’t exactly great and the lack of back story at the beginning made it a bit confusing to follow early on. That wasn’t helped by the fact that the voice acting isn’t stellar. The Healer character is a bipedal dog who snarls in dialogue which is more comical than threatening, for example. The Rogue class character is reasonably well-acted though that might be because I liked the Blood Bowl shout-out while I let the game sit idle for a few seconds.

The graphics are okay. The combat animations and effects do look pretty good. The environment textures aren’t photo-realistic but I don’t expect it to be nor do I think it has to be for a fantasy RPG. The graphics fit well for the story and setting that Cyanide has created for Aarklash: Legacy. Basically, it works but you won’t be it picking up heaps of praise. And, fortunately, the HUD is well-designed and very minimal. Most of the graphics are held to the bottom-third of the screen which leaves the rest of the screen for the game.

The only real issue I have with the graphics is during the in-game cutscenes. Since there aren’t pre-rendered cinematics, the story is time through in-engine cutscenes. However, when we go to cutscenes, the animations seem really stiff. I’m not sure how the gameplay animates better than cutscenes but I’d imagine that this will be one of the areas that will see some polish between now and release.

Fortunately, the game does pick up in the combat component of the game. The battle system is very reminiscent of Baldur’s Gate. You play from an isometric camera perspective. As with classic BioWare games, you can pause combat to assess the situation and queue abilities for use before starting time again.

You will build a party of four from eight different characters who each have different classes, different abilities and different positives and negatives to their use. There isn’t really an OP character. The dark mage can deal out a ton of damage but has no armour against physical attacks. The healer is an important character for obvious reason but doesn’t have MP regeneration so she has to leach HP from allies to convert to MP. The warrior is a tank with a lot of HP but has to drain that HP to use her skills. That doesn’t even mention the branching skill tree and inventory system that gives you further ability to customize characters and tailor things to your preferred combat style. 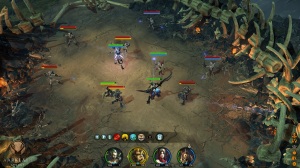 That makes combat much more cerebral and difficult than it already is. And, trust me, this game’s combat can be painfully difficult at times and you really have to be on the ball. When you aren’t outnumbered, you usually aren’t in too much trouble. Once the number of enemies gets to six or more, you’re going to have to do some serious micromanagement and combat will be in pause more often than not. Even on the easiest difficulty, when you’re outnumbered two-to-one, you’re in a whole heap of trouble.

The AI can be smart at times and moronic at others. Your enemies will usually focus their attacks on one or two members of your party to take them down more quickly than engaging in a series of one-on-one skirmishes. However, that heavily focusing AI can be exploited. During the boss battle at the end of the first area, I ran my tank around in circles for the whole fight because she was the only character anyone was trying to attack. The other three members of my party killed the rest of the enemies one by one.

Speaking of the AI, I would like if there was some sort of automated contextual commands that you can setup like in DA:O. The ally AI can be difficult to control at times. They have a tendency to randomly start attacking different targets than the one you told them to attack and will occasionally refuse to stack abilities. If I could tell the healer to heal any ally with less than 25% health or my dark mage to cast a specific spell on an enemy with less than 33% health, that would make combat a bit easier.

Even if I wasn’t particularly impressed with the story or audio of the game, there’s a lot of promise in the gameplay. With only three or so hours available in this preview, I’d reckon that there’s a lot more depth to the combat to explore as characters level up and we add new characters to the party.

While this is just a preview and there’s still plenty of polish work still to be done, there’s definitely potential in this game to be a hit once we get the final product with all the bells and whistles available.

Aarklash: Legacy will be available for PC in September 2013. The preview copy of the game was provided by Cyanide Studio. As this is a preview and not the final release copy of the game, this preview is not necessarily representative of the final product. The game is likely to change and improve between this article and release.

One thought on “Aarklash: Legacy Preview: A Little Bit of Old School”