Hey look! We’ve added IndyCar coverage this year on the blog. Regular readers know that I’m a passionate fan of American open-wheel racing. I watched CART long before I ever watched Formula One or NASCAR so I think it’s about time that I brought some IndyCar posts to the blog. It’s a bit of a work in progress but for now, our IndyCar coverage will be similar to the race and news recaps we do for F1.

And what a week it was for us to start writing regularly about IndyCar. We saw Will Power dominate the weekend only to get literally run over during the race. Two drivers made us go “Danica who?” during the race. One was Simona de Silvestro who ran in the top five for all but the final lap. The other was the man who scored Go Daddy’s first IndyCar win as the Mayor of Hinchtown, James Hinchcliffe, scored his maiden IndyCar victory.

The weekend was dominated by Penske’s Will Power as everyone had expected. The Aussie had been far and away the fastest car at St. Pete which was the norm. He won his fourth straight pole at the track on Saturday and ran away from the field from the drop of the green flag.

Power’s weekend started to unravel thanks to past championship rival Dario Franchitti who brought out the race’s first caution after hitting the wall on cold tires after his first pit stop. On the restart, Power slid long in Turn 1 and let Helio Castroneves drove by and into the lead. 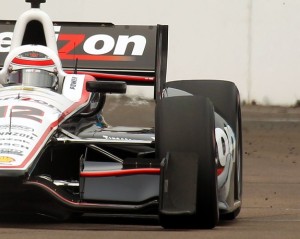 With Power on blacks, he didn’t have to pace to get around his teammate. His shot at the win would end under caution when he was run over by J.R. Hildebrand. The Panther pilot said he was paying attention to his steering wheel when he ran up and over the back of Power’s car. Hildebrand was out on the spot while Power had to stop twice for repair which buried him deep in the field and out of contention.

On the next restart, Castroneves ran deep into Turn One which allowed Hinchcliffe to slip by. Slowly but surely, Hinch was able to pull away en route to a comfortable win.

Further back in the field, Simona de Silvestro, who started third, was clinging to the final podium spot but ran out of tires over the last few laps. On the second to last lap, she powerslid out of the final hairpin on very worn tires which allowed Marco Andretti and Tony Kanaan by. On the last lap, the same slide allowed Scott Dixon to out-drag her to the line while E.J. Viso finished just a hair behind the pair.

The Mayor of Hinchtown picked up his first win in his 32nd career start. After the last couple of seasons, a win was really a matter of when rather than if. Castroneves led the most laps but only managed P2. Andretti’s time with a driving coach over the winter paid off with that final podium spot.

Elsewhere in the top ten, Tony Kanaan finished 4th. Scott Dixon climbed from a 20th starting spot to be the highest finishing Honda in 5th. Simona’s 6th wasn’t her best career finish but it was an impressive show of speed after running with an anchor called a Lotus engine in 2012. E.J. Viso’s first run for Andretti went fairly well with a 7th. Takuma Sato repaid A.J. Foyt’s faith in him with a top ten in 8th. Justin Wilson and Alex Tagliani rounded out the top ten.

We weren’t even two days into the season when Chip Ganassi started taking shots at what he felt was an underperforming Honda powerplant. The time sheets clearly showed that the Chevy cars were quicker than the Honda boys as was the case at the start of last season.

One thing we learned last season was that the Chevy was quicker overall but the Honda was still competitive in the right hands and definitely a match for the Chevy on the ovals. As we transition to the oval portion of the season, the Hondas will come to life. The problem really seems to be that the Honda cars lack single-lap pace. They claimed four of the top ten spots in the race but only three of their cars started in the top 12. Chip might be a bit harsh on Honda but there is a small problem that’s been identified. Complaining about it already is a bit much but a lack of qualifying pace will be a big problem on the street courses.

Today’s factoid that is likely only interesting to me: Danica Patrick has only one road/street course podium and only eight top six finishes on road/street tracks in her seven IndyCar seasons. All of that was done in equipment that was among the best on the grid.

In three seasons and one race, Simona has already done that twice. The comparison isn’t quite apt until you realize that Simona was driving a Lotus last year which means that the season shouldn’t be held against her and HVM was the most back of the backmarker teams. Simona can flat-out wheel a race car.

While IndyCar is down to only one race in Canada this season, the series’ Canadian TV partner is better than ever. IndyCar’s Canadian TV rights were purchased by Sportsnet from TSN. SN promised to have every race shown live on one of its networks (the Sportsnet regional channels, Sportsnet 1 and City TV). Last year, TSN showed a delayed broadcast of five of the season’s 15 races.

While TSN is Canada’s biggest sports network, they treated IndyCar and its fans with such disdain that it makes ABC/ESPN look like IndyCar’s biggest supporter by comparison. The emphasis that Sportsnet is putting on IndyCar broadcasts is positively refreshing.

What amazed me the most was the amount of coverage and promos Sportsnet had. For weeks in the run up to St. Pete, Sportsnet ran some pretty good promos about the action and drama of IndyCar. They also ran a tape-delayed qualifying broadcast as well as the Indy Lights race. Those might seem typical for NBC Sports Network but we’ve never had that in Canada before.

The coverage wasn’t bad. The Sportsnet team of host Rob Faulds and analysts/racing legends Paul Tracy and Bill Adam were okay. Nothing revolutionary there. They did borrow the set from TNT’s NASCAR coverage, though, which was a nice touch. Sportsnet used NBC Sports Network’s play-by-play which would have been fine if the sound mixing wasn’t terrible. You couldn’t hear the NBC crew for the engines. Also, they cut away from the post-race interview with Simona for the team to talk more about Hinch. I can understand why they were so excited but I was just as happy about Simona’s run as The Mayor’s. I guess that’s what happens when you don’t do photoshoots in lingerie and bikinis. 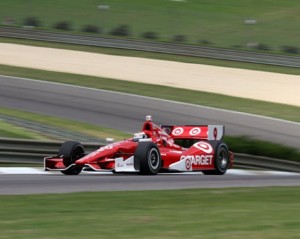 The next race is in two weeks’ time for the Indy Grand Prix of Alabama at the Barber Motorsports Park. Barber is an absolutely gorgeous facility but it’s a bit unsuited for the frequent passing opportunities that fans are looking for. There aren’t many good passing opportunities. The 90° left at Turn 1 and hairpin at Turn 5 are the two best places to pass but a daring driver could try a move at the Turn 7 chicane.

Penske Racing has won all three races at Barber with Castroneves winning the first one and Power the last two. Scott Dixon also has a good track record in Alabama so don’t be surprised to see him be able to reproduce this weekend’s charge to the front. After his performance this weekend, don’t be surprised to see James Hinchcliffe lead the charge against Penske and Ganassi.

One thought on “IndyCar – GP of St. Petersburg: Vote Hinch for Victory Lane”