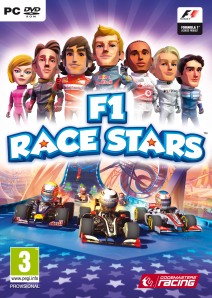 I have to admit that I was excited about the prospect of a Formula One inspired karting game. It was so un-F1 that how could it not be cool? You’d be powersliding cars around turns, firing weaponry straight out of Q Branch at competitors and racing on suped-up versions of real race tracks. That would be spectacular and would be on my must-buy list ahead of F1 2012.

Then I played the game. While Codemasters tried to balance between staying true to F1 and true to the karting genre, it didn’t quite work when it was all put together. What could have been a spectacular entry in the pantheon of Formula One racing games and karting games unfortunately turned out to be a bit of a dud.

F1 Race Stars doesn’t drive like a classic karting game. Codemasters stays true to F1 by requiring braking into sharp turns rather than the classic drifting because drifting and powerslides aren’t in Formula One. Similarly, the classic boost mechanic is changed. You can get a KERS boost out of a slow turn. Rather than charging under braking and choosing when to activate KERS like the drivers do in F1, you pump the gas in highlighted KERS charging zones in a turn. You can charge three levels of KERS which lead to increasing boosts out of turns.

These F1 elements require players of F1 Race Stars to have a different skill set than traditional kart racers. You need to be smart on the brakes to not run off-track and out of the KERS zone but not lose ground to other cars. You also have to concentrate on staying on road and charging KERS to maximize the benefit. In other words, I liked that you had to drive these karts but I can see the other side where that’s not what we’ve come to know and love from karting.

The combat system is where this game starts to fall apart. The blame for this can’t really fall on Codemasters. While I dream of a Q Branch arsenal that would make James Bond jealous, the F1 license doesn’t allow that. I’ve read that Formula One Management doesn’t permit what is effectively the destruction of cars. You won’t see engines spitting flame or wheels coming off the car. Wings will come off and suspension parts will get bent but there won’t be big crashes. I’m guessing this has to do with F1 trying to portray a safe, family-friendly image in a sport that is inherently dangerous.

As a result, the weapons are bubbles that are dropped as traps, fired as homing bubbles and fired as ricochet bubbles. All trap competitors and momentarily stop them. These are pretty standard weapon types from karting games. The problem is that they all function the same way and look the same as a result of the license’s restrictions. It’s not Codemasters’ fault but it sure doesn’t help the game.

These bubbles also cause damage to opponents. A hit results in a car sparking from the back while a couple more hits result in a car losing its front wing, all four wheels hanging loose, smoke coming out of the engine and the car losing top speed. This brings in the third F1-style addition to the game in the pit lane. If your car takes damage, you can drive through one of the three pit lanes in a track to repair damage and get back to speed.

There are a couple of F1 inspired power-ups that you can use to your advantage which were also my favourites in the game and welcome additions. There is a long speed boost called DRS after the real-life overtake assist (though your rear wing doesn’t open like on an F1 car). There are two rain power-ups which cause your opponents to slip and slide due to a lack of traction on slick tyres while you automatically get upgrades to Pirelli rain tyres. The final F1 power up is the safety car which holds the leader up and allows everyone to catch up to the safety car at racing speed. The safety car is probably the most unique power up to this series and an excellent meshing of F1 with karting.

Also true to F1, each team’s car features a different special power to differentiate it from the field. For most cars, this involves being able to triple fire a weapon. Others have bonuses for different types of boosts (for example, Red Bulls have a bonus to their slipstream boost while HRT gets extra speed from the on-track boost pads). McLaren drivers get to redraw their power-ups if they don’t like what they pick up. It adds a little bit of strategy to who you pick rather than choose between a bunch of cars equal in performance. It also requires you to drive each car a little differently because the Red Bull benefits from coming from behind while Mercedes’ triple pulse bubbles reward being wheel-to-wheel with competitors.

The actual racing feels a bit odd. I don’t mean odd for a kart game. The unique elements of this game come naturally after some practise. No, I’m talking about racing other cars. I often have no idea how I’ve moved up the field or how I opened up such a big lead or got left so far behind. That’s compounded by the utter lack of a catch-up mechanic. If you gap the field, you can cruise to victory without breaking a sweat. If you’re in 12th after half-a-lap, you can go eleven-tenths and still not get close to the top step of the podium.

Another disappointment is the lack of track selection, of the 20 races on this year’s F1 calendar, only 11 are represented in the game (12 if you pre-ordered with placeholder folders for three more tracks in the game install data). Those are mixed into a series of 30 tournaments that comprise the career mode which means things get repetitive quickly. Career mode is a misnomer, though, because you unlock new multi-race tournaments by winning other tournaments. It’s really not a career or season mode at all.

For all the things I don’t like about the actual racing in the game, the environment that Codemasters has created is absolutely spectacular. The cartoonish, pastel-coloured design of the tracks, cars and drivers is my favourite part of the game. It’s hard to quantify but everything just exudes a fun and light-hearted attitude which is disappointingly rare in Formula One.

While there are only 11 tracks in the game, each track combines some of the signature turns of the real track with the classic kart racing game features as jumps, loops, obstacles and the like. When you run off the real track, you’re taken through a cartoonish representation of the country such as through a canyon in America, underwater in Australia, the rainforests of Brazil and the Autobahn in Germany. The attention to detail in each track is spectacular. They all play unique from each other but have the same high level of production work.

The audio is pretty good too. The music while racing sounds appropriate for that country. The loading and menu music has a sports broadcast sound to it and might actually be better than Madden’s sports network-esque theme. The cars sound like F1 cars though engine noises are buried underneath music, ambient sounds and the drivers. Yes, the drivers get voices too. It’s not the actual drivers doing the voices unless Kimi Raikkonen sounds like the Swedish Chef from the Muppets and Kamui Kobayashi sounds like an Austin Powers villain. That might offend the easily offended but its all in good fun and keeping in line with the cartoonish exaggeration of the world of F1.

There is room to improve for next year. Keeping the art style and direction for the sequel (assuming there is one) is a must. Introducing a working catch-up mechanic is also necessary. A complete calendar of events would go a long way to keep career mode from feeling repetitive. Allowing you to create your own driver or team to run in a career or challenge mode would also give the game a bit more length.

Given the restrictions in the license, I’m not sure what can be done to improve the bubble weaponry. I know violent projectile weapons are out of the picture but FOM allowed the missile warp to the front. Maybe the trap bubble could be dropping an oil puddle causing a car to spin out. That’s a classic karting weapon. Off the top of my head, I can’t think of a non-violent projectile weapon but a little of variety would be a nice change from the different coloured anti-escape orbs.

From the PC side of things, it would be nice if next year’s game isn’t just a lazy port of the console version. On PC, your graphics options are brightness, screen resolution and windowed or fullscreeen. That’s it. No adjustments for filtering, v-sync, shadows or textures. It’s not a graphics intensive game but it would be nice to see some options there. Even worse is the control scheme for PC. You can use an Xbox 360 controller for PC (and only that controller) but if you want to use a keyboard, you can’t adjust the keys. That’s made worse by the fact that you have to drive with the WASD keys. Why on earth wouldn’t you tie driving to…  I don’t know, THE ARROWS?!

F1 Race Stars is an odd game for me to score. The racing isn’t very fun and that’s really the core of the game which means I can’t score it well. But I love playing this game if that makes any sense. The casual attitude of the game’s design rather than the traditionally super serious and super technical F1 games Codemasters puts out is just so easy to love. It’s a great environment to be thrown into.

As I said though, for me, there isn’t much to this game. The braking, KERS and F1-style power-ups are fun additions to the genre but they don’t make up for the quickly repetitive racing due to a lack of tracks and lack of a catch-up mechanic which results in dull races. It’s such a shame because the potential for this to be something special was there. Maybe we’ll get some improvements if there’s a sequel.

I don’t think the serious F1 fan will get much out of this game and especially not for the $60 price tag. Still, if you’re looking for a Christmas gift for the young (under 10) F1 enthusiast in your household, you’d do better buying this than F1 2012… Even if a $40 price would have been more appropriate given the relatively small amount of content compared to F1 2012 or even ModNation Racers.

F1 Race Stars was reviewed on PC but is available on Playstation 3 and Xbox 360. Your impressions of the game may change based on which platform you played the game on.

One thought on “F1 Race Stars Review (or Bursting Your Bubble)”