Having put in 110 starts so far in his F1 career, it seemed as though that Nico Rosberg’s claim to fame would be being the son of 1982 World Drivers’ Champion Keke Rosberg and being high on the list of most starts without a win. In race weekend #111, Nico managed to not only secure his first pole position in dominant fashion but scored an emphatic victory for his first Formula One Grand Prix win.

To say that Nico’s pole position win was dominant would be an understatement. He beat second-placed Lewis Hamilton by over a half-second in Q3. Thanks to a five-spot grid penalty for an early gearbox change, Hamilton would start 7th. Michael Schumacher got promoted to a P2 start making it an all Mercedes front-row, a first for the team since it was Brawn GP in 2009. Asked after qualifying, Jenson Button said that the only car that could challenge him on pace was the 3rd place starter of Kamui Kobayashi’s Sauber.

Quick race pace or not, it was the two Mercedes who led from the lights with Rosberg leading Schumacher. Button was quick to apply pressure to the Mercedes duo by moving from 5th to 3rd off the start. Rosberg settled into a comfortable three-second lead over Schumacher who had a gap of one second over Button. That came apart in the first round of pit stops. Schumacher was the first to stop but the team sent him out with a loose right-rear wheel which quickly fell off the car and caused the seven-time World Champion to retire from 2nd place.

The race completely changed at the second round of pit stops. That’s because Button made a second stop on Lap 24 and Rosberg didn’t make a stop with the rest of the field. The McLarens were on a three-stop strategy while Mercedes, who hadn’t figured out the tyres at all in the first two rounds, were attempting a two-stop race. The difference in strategies allowed Rosberg to stretch a gap while trying to preserve his tyres. After fighting through two-stop traffic, Button started reeling in the German at upwards of two seconds per lap. That quickly shrinking gap forced Mercedes to bring in Nico for his second and final stop of the day.

Button got some clear air and proceeded to try to stretch his advantage over Rosberg heading into his final stop. When he did come in for his last tyre change, he was delayed by six seconds as his pit crew struggled to get his left-rear tyre on the car. This put him back in traffic proving the old adage that one second lost in the pits is equivalent to losing three seconds on the track. While Button was able to work his way through traffic, he lost too much time to Rosberg which let the Mercedes driver cruise to his first Formula One victory by 20 seconds.

I would’ve liked to say that I watched Nico Rosberg score his first win through a quality drive and excellent strategy. However, that would suggest that we have a competent local broadcaster in Canada.

My complaints about TSN are many but this season seems to be worse than ever. One thing was always certain about flyaway races: TSN would rebroadcast them at 8:00 AM Eastern time for people who weren’t able to stay up until 3:00 AM for the start of the race. Since creating TSN2, a premium digital cable channel, race rebroadcasts have been shifted over there. The Australian Grand Prix was replayed at 10:00 AM Eastern (not a complaint but it just meant I had to avoid spoilers for longer than usual) and the Malaysian GP was replayed at the usual 8:00 AM. 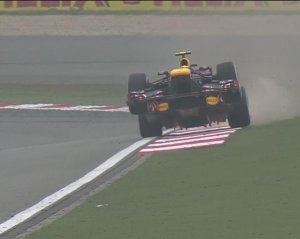 This weekend’s Chinese Grand Prix was replayed at 1:30 PM on TSN2. What was so critical that it had to be pushed back over 5 hours from the usual timeslot? From 5:00 AM to noon, TSN was showing SportsCentre followed buy documentaries until a 3:00 PM hockey game. Over on TSN2, it was a mix of SportsCentre and hockey highlights show That’s Hockey 2 Nite from 3:30 AM to 1:30 PM or ten consecutive hours of the same two taped programs. This also put the only F1 race broadcast that was viewable for most people up against live NHL playoff hockey, live Toronto Blue Jays baseball and live NASCAR Trucks from Rockingham. In other words, TSN dropped the replay into an undesirable timeslot.

While buying a simple DVR so I could record and replay the race at my own convenience would solve not being able to watch the replay, it doesn’t excuse the fact that TSN has been jerking around race fans all season. NASCAR is regularly relegated to TSN2 with Nationwide Series races often tape delayed. Of the two IndyCar races, they’ve both been on TSN2 with the Barber Motorsports Park round being shuffled to a late-night broadcast. Now F1 can’t get a consistent rebroadcast timeslot. When it comes to TSN, they follow the golden rule: He who has the gold makes the rules. In Canada, the sports channel with the gold is TSN. And that’s a shame because Sportsnet actually tries to do a decent job of promoting, scheduling and actually broadcasting their properties.

Since I wasn’t able to watch the race, there won’t be as much of a race recap this week (which is apparently a shame as I’ve read it was an absolutely amazing race). However, there was plenty of interesting news ahead of the weekend, most of which involved Lotus. It was reported in the last week that Group Lotus, the car manufacturer, would be terminating its sponsorship agreement with Lotus F1, owned by Genii Capital. However, Genii won’t be changing the name of their team again as a result. The team will remain Lotus for the foreseeable future as Genii owner Gerard Lopez believes having the Lotus name in the sport in good for Formula One. He also said that losing the sponsorship revenue from Group Lotus wouldn’t badly harm the team as they have been bringing in new sponsorship from the likes of Unilever and Microsoft which has put the team in a strong cash flow position.

This announcement led to a very bizarre press release in which Lotus addressed rumours about the company that I hadn’t heard before the release. If you read the whole thing, you kind of wonder if CEO Dany Bahar got drunk, wrote something up and released it before anyone in marketing or public relations could stop him. In the press release, Lotus dismisses unreported rumours of CEO Dany Behar’s departure and dismisses rumours that Proton Group’s (Lotus’ owner) managing director which was reported in a small Malaysian financial news publication. Lotus laid the blame for these rumours at the feet of Caterham boss Tony Fernandes who used to be the boss of Team Lotus until a massive legal kerfuffle with Group Lotus.

The press release said “we don’t want to get too personal” and took shots at Tony Fernandes for his Caterham team still being at the back of the pack, Caterham’s technical director Mike Gascoyne for incorrectly predicting that Caterham would score a point last season and journalist Joe Saward’s credibility and independence. That’s not being personal about it at all. It was a ridiculous and unprofessional press release by a multi-national corporation. Fortunately for the road side of Lotus, their formerly sponsored F1 team took the heat off them.

In what will be a story heading into the next race, Lotus F1 launched an official protest against the front-wing f-duct run by Mercedes. The system was already deemed legal by FIA race director Charlie Whiting and FIA technical delegate Jo Bauer. So Lotus F1 took their protest to the race stewards of the Chinese Grand Prix. The main Lotus claim was that the front-wing f-duct was a driver-operated aerodynamic device that is not covered under the exemption for the DRS rear-wing passing aid.

The stewards once again ruled the Mercedes system legal. The main reasons involved the fact that many teams are changing how their car directs airflow to maximize the DRS effect. The air flowing through the holes opened by DRS to stall the front wing is one of those ways to legally channel airflow. Fortunately for us, we aren’t insulted with a sudden change in rules interpretation when a device is ruled illegal as a cost-saving measure like with Lotus’ reactive ride height system. Actually, maybe they’re still pissed off about that. It would explain the bizarre behaviour this week. 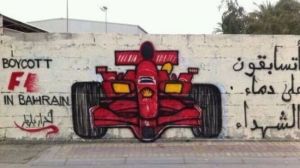 The next race is next weekend in Bahrain. I can’t actually believe that F1 is going to Bahrain. Without wading too far into the politics of the situation in Bahrain, it’s clear that the situation hasn’t improved so much over last year that it’s safe for teams to go. Two local broadcasters, Finland’s MTV3 and Japan’s Fuji TV, have both stated that they aren’t sending broadcast teams to Bahrain. Speed’s Will Buxton has tweeted that his bosses have stated that he has the option to not attend the race but Speed won’t force him to go. The drivers and the team have both said that they trust the FIA’s decision on the matter but you can’t help but feel that they were influenced by the commercial side of the sport pressuring them not to cancel a race when there’s money to be made.

So who do I expect to be upfront in this round of the World Championship? I think that the odds on favourite are the Mercedes-powered teams of Mercedes AMG and McLaren. While the cool of Shanghai helped Mercedes with their tyre issues, Bahrain’s conditions will be much hotter. If Mercedes haven’t completely sorted out their tyre issues from Australia and Malaysia but rather benefited from cool temperatures in China, it’ll likely be a McLaren sort of day in Bahrain.