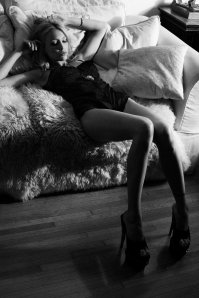 I’m back! After spending a month being buried by books, I’m here again to post a weekly edition of the Entertainment Link-Off. Huge thanks to Steve for covering for me during the month of June. Normally I would kick off the entry with someone involved with a big movie release but given that I’m not a huge fan of Rosie Huntington-Whiteley, I think I’ll start off with someone that won’t be in the latest Transformers film. All three wide releases this week are critically panned, so there’s nothing really noteworthy, but apparently Katie Cassidy can be seen in some film called Monte Carlo, so here she is.

After the jump, some Transformers related links, a Sucker Punch drinking game, a nifty short film on plot devices, a Pixar-like take on The Rocketeer, a few movie trailers (including one mash-up) and Clara C’s new music video!

It might be an attempt to build up more nonsensical buzz for his latest film, but Shia LaBoeuf shares that he had a little something something going on with Megan Fox while filming the previous Transformers flicks. (JoBlo)

To celebrate the release of Transformers: Dark of the Moon, here is a look at 12 homemade lifesize transformers. (Forever Geek)

The latest Transformers flick does not deviate from the usual Michael Bay fare, so here’s something that summarizes all Bay’s flicks in under a minute. (College Humor)

Wanna test to see if you’re a true Transformers fan? Take an attempt at this quiz to see if you can spot the fake robot names! (Movieline)

Fear not folks! Looks like Joe Rogan is returning to host Fear Factor on NBC. I guess the show’s return isn’t as bad as initially though huh? (TV Guide)

It’s rather unfortunate that Dave Foley won’t be appearing in the upcoming season of How I Met Your Mother. So the show is now adding another Canadian comedian to fill the void as Marshall’s boss. (Entertainment Weekly)

Disney has announced a release date for the sequel to Thor but turns out director Kenneth Branagh won’t be returning. (Deadline)

With Sucker Punch out on DVD, this is something for everyone to do at future house parties. So the film was visually stunning but the end result wasn’t all that great. Here’s a drinking game that will help you get through the film’s entire running time. (Film School Rejects)

Could this be the plot of Ridley Scott’s non-Alien prequel Prometheus??? (io9)

So this short film is essentially an advertisement but it’s actually quite fun to watch as it explores all the different ‘plot devices’ with a nice sense of humour. (Red Giant)

The teaser trailer for Mission Impossible: Ghost Protocol is out! (Trailer Addict)

The Rocketeer may have come out two decades ago, but clearly people have not forgotten about it. I suppose it certainly helps to have another period action piece like Captain America to serve as a reminder lately. Anyway here’s a nice short animated tribute film to The Rocketeer. It is done in a certain style that makes it seem like it was Pixar that was behind all this. (John Banana @ Vimeo)

Captain America director Joe Johnson made The Rocketeer back in 1991 and he claims that he would be more than happy to do a sequel to the film. I wonder if Disney feels the same way… (Moviefone)

Pixar may have been having a tough week given that Cars is their first critically slammed film in their library, so I suppose everyone over there is looking ahead to their next feature Brave to bring it back up to a fresh Tomatometer. Judging from the trailer, it does look pretty good.

Everyone’s been comparing the film No Strings Attached and the upcoming flick Friends with Benefits. As both share a common theme, it’s not surprising that both films are turning out to be ridiculously alike… as displayed by this trailer mashup.

A few weeks ago, Clara posted a teaser trailer for her music video Heartstrings. Well earlier this week, video in its full glory has hit the net. The fantastical elements of the video is a nice touch and fits perfectly with Clara’s smooth vocals. Have a listen (and a look) at the MV!