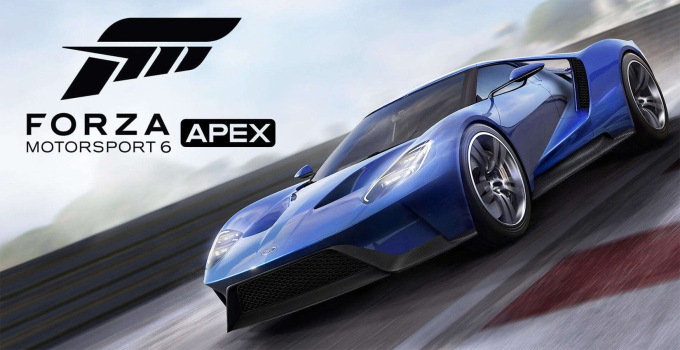 With the nearly forced conversion of Windows 7 and 8 users to Windows 10 earlier this year, Microsoft also announced their Xbox Play Anywhere program that promises all Microsoft published Xbox One titles will be available on PC via Windows 10 and the Microsoft Store. Given some teething problems with games through the Microsoft Store and the Universal Windows App (UWP) format, no one would fault you for being concerned.

The first experience that I’ve had as a result of Microsoft’s push of Windows 10 as a gaming platform is Forza Motorsport 6: Apex. Unlike the upcoming Forza Horizon 3, this isn’t a full release of Forza 6 on PC but rather a jumped up tech demo. While Forza 6 is a decent experience and certainly worthy of the Forza franchises comparisons to PlayStation’s Gran Turismo series, I can’t help but think that Apex is a little lacking.

I should mention off the top that Forza Motorsport 6: Apex is a free-to-play title with microtransactions. These microtransactions allow you to unlock cars early rather than earn medals from races to unlock new cars. I never really found the unlocking to be particularly slow nor did I have to grind for better cars to beat races. In a sense, that’s better than Gran Turismo but you don’t have a career mode or really anything in terms of car customization so comparing the Forza 6 to Gran Turismo (which isn’t on current-gen consoles) is a bit apples to oranges at this point.

There is a single-player campaign mode, called Stories of Motorsport, that will bring you through a dozen or so races. Each race is introduced by a member of the motoring press, including former Top Gear hosts billed as automotive journalists Richard Hammond and James May (Jeremy Clarkson was suspended and fired from the BBC six months before the game was released), Top Gear USA hosts Tanner Foust and The Smoking Tire’s Matt Farah.

While I realize that Forza 6: Apex is a free-to-play title, the Stories campaign is the part of the full release that gets stripped down for Apex. Prior to launch of the full Xbox One game, Turn 10 boasted some 70 hours of gameplay in the campaign mode. The dozen races of Apex will take you an afternoon to complete. I estimate that it took me two to three hours to complete the whole campaign. There is no option to purchase additional content or expansions which is unfortunate given how much content we don’t have access to with the base free-to-play game.

Also featured is the Spotlight mode. Various challenge events will be unlocked for two-week periods with two new events per week. Like the campaign mode, there are specific cars (or car classes) to drive with various challenges to earn you bonus race points to earn medals and unlock more cars. The differences between Spotlight and Campaign are a lack of race introducing voiceovers and that there are new challenges every week to keep the game fresh.

Unfortunately, Apex doesn’t come with multiplayer. The closest you will get is leaderboards where you are ranked against the world on race points by race. Drivatars are available in the game. These are AI drivers that somewhat simulate real players’ driving habits. It’s hard to really confirm that without racing the actual players online to know whose bad habits have translated best to their drivatar. Sure, the AI made some mistakes but it never seemed like anyone was prone to more contact or driving off-road or dive-bomb pass attempts when compared to others.

Speaking of a lack of content, it’s not just game modes that are lacking but cars and tracks. Before DLC, there are 460 cars with Forza Motorsport 6 with another 140 cars added after launch to be raced around 28 tracks (two of which are DLC). Apex only has 63 cars and six tracks which is about about one-eighth and one-fifth of Forza 6’s launch content, respectively. Again, I realize that this is a free game but I would gladly drop up to $60 for the whole game but there’s no option to do so. Instead, because you unlock cars by collecting medals from race points, you get a slow trickle of a few cars that you can only run in a couple of races outside of quick race mode.

If you’ve never played a Forza game in the past, which would be most non-Xbox gamers, the Forza Motorsport series is closer to a sim game though it’s more of a pseudo-sim. If you’ve played Gran Turismo 6 or Project CARS, the handling model will feel quite familiar. The cars feel heavy (well, the street cars do) but you can keep all four wheels in line until you start pushing way too hard. That’s when the back end of the car wants to swap with the front and even that’s a rare feeling.

Unlike what little I’ve played of GT6 and the lengthy time I’ve spent with Project CARS, the driver aids for power and handling are basically idiot proof. There is almost no chance for wheelspin or spinning using traction control or stability management. What those do is make your car understeery as all get out. Push a little hard and you’ll wash right off the track. I’ve been racing without stability management because the cars aren’t particularly hard to control and it’s not that bad even without TCS. For something that wants to be a sim, it’s not that bad without assists (except for auto shifting because I found it hard to use engine sounds as a queue to shift). I should also mention that ABS is wonky feeling. It extends your breaking time because it doesn’t stop lockup but locks your breaks for brief and visible moments as you break heavily. So the driver aids work but Apex will punish you for using them. 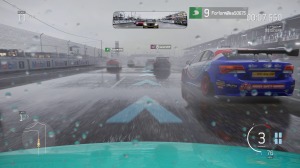 Forza doesn’t feature dynamic weather or lighting like the F1 games or Project CARS. However, they do a pretty good job of the effects they have. Night racing is night racing where you’re guided by your headlights and the minimap. Wet weather racing is actually quite well done if a bit unrealistic. Grip levels fall quite a bit in rainy conditions and a dry line will quickly emerge though grip is far better in Forza than it is in F1 2016 which I think is the best wet weather racing on the market. On the other hand, the game also features massive puddles which will slow your car right down like big puddles in real life. Mentally, I have this disconnect where a track with that bad standing water would be placed under full course caution (safety car) or red flagged because of unsafe driving conditions.

From a technical perspective, Turn 10 has done a really good job with bringing Forza to PC. The heart of their game’s back-end is built around dynamically changing graphics settings in order to maintain 60 FPS. For the most part, it does a really good job but can occasionally plummet below 50 and even 40 FPS if the situation gets really hectic. Nowadays, the idea of a game automatically tweaking graphics settings to optimize framerate is unusual but Digital Foundry says that this is in use on consoles for Halo 5 and DOOM while old Papyrus racing games would have similar dynamic graphics changes. Much like when I talk about dynamic AI, this was a function that gamers had 20 years ago and treat as though it’s novel now.

So while the game can look very good with the ability to run in high detail beyond what an Xbox One can handle and at up to 4K resolution, you’re not necessarily going to get it with your PC. The recommended 1080p at 60 FPS specs are 12 GB of RAM and 4 GB of VRAM. That’s quite a bit unless you have a new, purpose-built gaming rig. My old AMD 7970 (rated at 3 GB of VRAM) can still handle it but I do wonder how much more detail I could get at 60 FPS if I turned down the resolution or had more graphics power at my disposal.

That’s not to say that the game is a technical marvel otherwise. My biggest complaint about the game, other than the lack of content noted earlier, is that the loading times are astronomically long. Booting up the game and some races take minutes at a time. I make sure I have a fresh book to read on my Kindle app before booting Apex. It’s not helped by the glamour shots of your car pulling into the pits or grid that you can’t skip prior to races. And in a peculiar choice, Turn 10 won’t let you see your tachometre (revs) prior to the race going green which results in consistent poor starts. 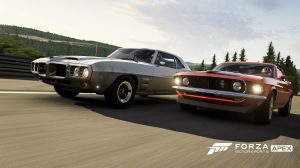 When I think about Forza Motorsport 6: Apex, I can’t help but think that this was a tech demo or proof of concept for Forza on PC. It doesn’t really have a comparable game on the platform with the exception of Slightly Mad’s Need for Speed: Shift and Project Cars games or other pre-open world NFS games. If Microsoft and Turn 10 went all-out for a full release of Forza 6, they would have had an absolute smash hit on their hands. Instead, this is a fairly poor first impression for PC gamers.

That’s not to say that what is on offer is bad and it is fairly meaty for a demo but it’s not much for a free to play game. Unless you come back every week for two new Spotlight events, you’ll exhaust all content within four hours at most. It’s not a bad value proposition for modern triple-A gaming but I’d much rather trade the free game in for a full $60 game that I can get far closer to 100 hours of gameplay out of. I trust that they won’t release an Apex version of Forza Horizon 3 on Windows 10 when we could get a full version with the Xbox Play Anywhere program.

There’s an eight or nine out of ten game in here somewhere but you get to experience so little of that in Apex that I’m not entirely confident in that statement. I keep saying that I’m willing to pay for the full Forza 6 experience but the only way for me to do that is to drop $300 on an Xbox One and another $60 on a copy of the game. I’d much rather spend $60 on the game right now. But I have to rate what is available and it’s not much.