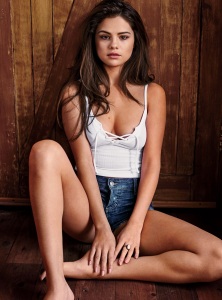 The new Canadian government was elected with a key part of their platform being that marijuana would be legalized. Now, they’re only something like six months into governance but wouldn’t it have been fitting if their new law went into effect or was introduced on 4/20. At least they have a whole twelve months to target that date again. I’d love to see what pot sales are like from 4/13 to 4/20 and compare that to the weeks before and after.

Anyway, if you’re reading this, then it’s likely Wednesday which means you’re here for the links. Let’s kick off with Selena Gomez.

Megyn Kelly organized a secret meeting with Donald Trump to organize a one-on-one interview. The secret message some observers are taking is that Kelly is trying to up her stock in the run up to contract negotiations. (Daily Intelligencer)

Bernie Sanders lost the Democratic primary in New York but he’s still seemingly in a battle with his own party. His team is trying to get the DNC to look into fundraising practices of the Clinton campaign. (Vice)

Ben and Jerry of Ben & Jerry’s ice cream fame were arrested for taking part in a protest in Washington last weekend. (CNN)

The adage that it’s better to be lucky than good might be more true than you’d care to admit to yourself. (The Atlantic)

For some reason, there’s still a debate over whether climate change is real. Now, it’s Sarah Palin stepping to bat to oppose evidence that the world is getting warmer and weather is getting weirder. (Washington Post)

A look inside the world of professional wrestling from the perspective of one of its most prolific wrestling schools. (Deadspin)

We’re how many years into the network and Fox Sports 1 is still trying to find its identity. (Wall Street Journal)

Want to learn the ways of social media from USC professors? Here’s the Cole’s Notes version of their teachings. (MediaShift)