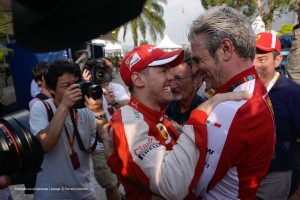 During the press conference following the Australian Grand Prix, Nico Rosberg made a comment to the effect of that it would be great if Ferrari would catch up to Mercedes. After this weekend, I think Nico is regretting his words. Not only was Rosberg outqualified by a Ferrari, he was outraced by a Ferrari. In fact, Sebastian Vettel outraced the whole field as he took his first win as a driver for Scuderia Ferrari.

The race started with Lewis Hamilton picking up from the last race with a pole. The final part of qualifying was delayed by a half-hour as a massive downpour forced a delay. In drying conditions, it was Hamilton who went fasted but he was only 74-thousandths of a second ahead of Sebastian Vettel. 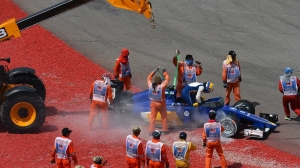 At the lights, both Mercedes got away strongly but a very Schumacher-esque cut across the track to throw a block. That made it Hamilton leading Vettel and Rosberg until Lap 3. At the start of the lap, Marcus Ericsson got far too ambitious with an overtake attempt and put his car in the gravel trap. The circuit had to deploy a crane to rescue him so the safety car had to be deployed.

One could say that this was the crucial mistake that cost Mercedes the race. One could say that Vettel was always destined to win this race because the Ferraris were taking care of their tyres on the hot track far better than the rest of the field. Regardless, when Hamilton pitted under the safety car with Rosberg stacked behind, that was game over.

Vettel stayed out to take the lead and had a four-car buffer between he and Hamilton with another two cars back to Rosberg. While it took Hamilton five laps to make it back to 2nd place, it’s not like the safety car was the deciding factor. The Mercedes did three pit stops but still couldn’t get as much out of their tyres as the Ferraris were able to with their tyres on two stops.

There were two pieces of evidence of this. After his first stop, Vettel quickly mowed down Rosberg and passed him. He was on his way to dispatching Hamilton before the Championship leader ducked into the pits. The other sign of Ferrari strength was Kimi Raikkonen’s charge from the back. He suffered a puncture on Lap 1 and fell to 18th. In 19 laps after the safety car period ended, Raikkonen made his way to 4th. It wasn’t just Vettel who was fast on Sunday. 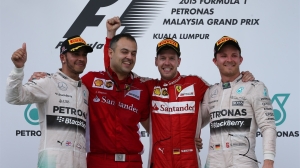 The win might have been Vettel’s 40th and Ferrari’s 1st in two years but, more importantly, it was Vettel’s first win for Scuderia Ferrari. It was a huge moment for both driver and team. Hamilton retained the championship lead by finishing 2nd. Nico Rosberg rounded out the podium.

As mentioned, Raikkonen clawed back from as far back as 18th to finish in 4th. The cars rounded out the points going two-by-two. Valtteri Bottas led Felipe Massa home in the Williams battle. Max Verstappen became the youngest points scorer in F1 history by coming home in 7th ahead of teammate Carlos Sainz. And the Red Bulls had brake problems which relegated them to rounding out the points with Kvyat ahead of Ricciardo.

The first application of Formula One’s new helmet wasn’t made at Sebastian Vettel’s expense as we all expected. It instead came at the expense of Lewis Hamilton. 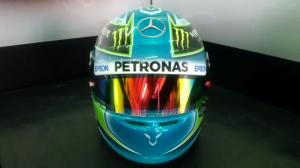 The defending World Champion brought a special black and teal helmet to Malaysia as it was the home race of team sponsor Petronas. However, he didn’t wear it because of this year’s new one helmet design per season rule. While we might have thought that a little fine wouldn’t have deterred anyone from wearing a special helmet design, whatever the penalty is scared Hamilton off of running his teal and black design.

The problem with the rule is that keeping to one helmet is supposed to help fans at the track and watching on TV identify the driver of a particular car. Sometimes, it’s not too hard. If you’ve got a fairly close show of a car, you can usually identify a car by number or helmet. However, from long shots or wide shots, you’re seldom going to be able to tell who is driving a car without a TV graphic or announcer identification.

The problem is that without that, you’re lost. The FIA only allows the cars to be differentiated by driver helmet and the use of a yellow fluorescent roll hoop camera on the team’s second car (if you know who that is). Those aren’t always visible, though. Even when they are, you aren’t always sure which car you’re looking at. 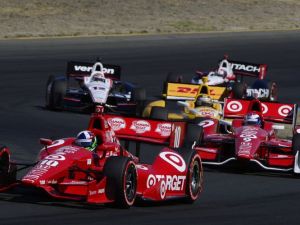 I’m not saying that we should have BAR’s 1999 proposal of having two different liveries on the two cars. However, Sauber has one thing right. They have the big numbers on the side of the nose. That won’t work for everyone because most teams have sponsors in that space. The alternative would be to borrow a concept from the Ganassi Target cars in IndyCar. One car had red front and rear wing endplates, the other white.

What Formula One should consider for 2016 is opening up the differences allowed in liveries. The teams should be allowed to differentiate the cars with the front wing, rear wing and mirrors. I know the mirrors won’t make much of a difference but you know the FIA will like that sort of thing. For TV viewers, different coloured elements on the wings will be easy to pick out from a difference (for example, Lewis’ wings are silver and Nico’s are teal, they’ll be easy to pick out from a distance. If you include endplates in that, the giant rear wing endplates in a driver specific colour will help fans at the track tell the cars apart too.

There was an expected change to the calendar over the course of the last two weeks. Bernie’s plans to sign a new agreement with the Nurburgring fell apart and his hoped last-minute solution with Hockenheim didn’t materialize over financial concerns. 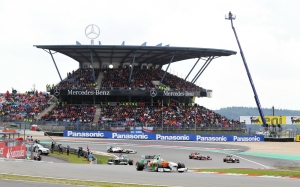 So the home race of the reigning World Constructors’ Champion won’t be happening. Considering the money that Mercedes has put into both the Nurburgring and Hockenheimring (Mercedes sponsors grandstands in recently renovated parts of both tracks), I can’t imagine that they’ll be very happy with Bernie looking for a few dollars more and killing an important race to their brand.

Speaking of money, the Malaysia Grand Prix will continue for the next three years. The circuit’s contract with Bernie expired with Sunday’s Grand Prix but a deal was announced immediately following the conclusion of yesterday’s race. The race will continue thanks to the backing of the Malaysian Government (the Prime Minister’s office made the official announcement) and continued title sponsorship from Petronas.

It seems as though the only way to get a Grand Prix now is to have the local/regional/national government pay for it. At some point, just as teams are starting to feel as though the finances of running F1 aren’t worth it, tracks and governments will soon think the same. Germany has just figured it out. France was priced out by Bernie. Monza sounds like it’s in danger. Who’s next to leave the calendar? 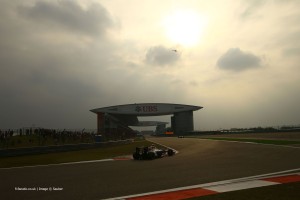 The next round of the 2015 Formula One World Championship comes in two weeks’ time. The early season Asian swing continues with the Chinese Grand Prix from the Shanghai International Circuit.

Last year, it was Lewis Hamilton who took home the win but he was also in one of the two clearly dominant cars. The other was Nico Rosberg’s W05. This year, Sebastian Vettel showed that Mercedes is fallible. Raw pace alone won’t win Mercedes a race. Even the slightest slip and one of the Ferraris will be there to pounce.

On the plus side for Mercedes, Lewis and Nico have a fairly good track record in Shanghai. Vettel, on the other hand, doesn’t do so well in China. Pound for pound, one could say that Raikkonen is better at Shanghai than Vettel. I would expect Lewis to come home with the win next week so order is restored. Well, until Bahrain.