After two months off, the most electrifying electric motorsports series in the world was back in action last weekend. Following the two-round stint in South America, it was the first of two rounds in the United States of America as the teams took to the streets of Miami for the fifth round of the championship. While there was some hot weather, the hot action was left to late in the day when Nicolas Prost made a pass in the dying laps to score his first Formula E win.

For the first ever American round of Formula E, it was only fitting that an American team scored the pole. Jean-Eric Vergne scored the pole for Andretti Autosport and led away from the lights. It was Nicolas Prost who lined up alongside on Row 1 but didn’t last too long as Sam Bird got by at the first turn.

The frontrunners would run within a couple of seconds of each other until the car swap. As they neared the car swap, Vergne and Bird were clearly in a class of their own with Bird all over JEV’s gearbox. Unfortunately, this battle would also be Bird’s undoing. Just as he passed JEV, Vergne dove into the pits while Bird stayed out. Whether it was a bad strategy call or distracted driving or a miscommunication, Bird should have swapped cars there but didn’t. As a result, he had to crawl around the track for another lap in order to make it back to the pits.

The exchange of pit stops brought the second lead change of the day. Daniel Abt assumed the point from Nicolas Prost. At first, it looked like Abt and teammate Lucas di Grassi were safely going to take a one-two despite having Nicolas Prost sandwiched between the Abt Formula E cars. The problem is that the pair seemed to have much worse batteries than those around them.

As the laps wound down, the power advantage swung from the Abt team to the competition. With five laps to go, di Grassi lost all pace as his battery abruptly ran dry. Abt also lost power more quickly than anticipated and ended up ceding positions to Prost and the hard-charging Scott Speed. On the final two laps, speed was all over Prost’s gearbox but couldn’t convert his power advantage into a pass on Prost.

The win was Prost’s first of the season. One could argue that it was overdue given that he was leading into the final corner of the Beijing ePrix before attempting to murder Nick Heidfeld. Scott Speed finished second in his Formula E debut though many are quick to point out he was also an Andretti test driver at the Donington Park open tests. Rounding out the podium was Daniel Abt in his best finish of the year.

Jerome d’Ambrosio brought home his best finish of 2014-15 with a fourth. Nelson Piquet converted his long first stint into a charge through the field in the second stint which ended in 5th. Felix da Costa is probably regretting missing that first race after finishing 6th to score his 3rd points finish in four ePrix. Loic Duval came home a respectable 7th in his Formula E debut. Sam Bird’s flawed first pit stop relegated him to 8th in the final standings. Considering how little power he had left on that final lap of his first stint, he’s lucky he didn’t earn an exclusion for exceeding the power usage limits. Lucas di Grassi’s aforementioned battery issues left him in 9th. Rounding out the points was Salvador Duran who scored his first points of the season following a power usage exclusion in Buenos Aires.

I’ve banged on before about driver continuity in Formula E before but it looks like I have to talk about it again for this race.

Trulli Racing had to make a late replacement of Michela Cerruti on Thursday after she announced that she was withdrawing from the sport. For the moment, ex-Formula One driver Vitantonio Liuzzi took the wheel for the Italian team.

Cerruti wasn’t the only late substitute. Early last week, the streak ended. The only man who had scored points in every Formula E race was dropped as Oriol Servia’s seat at Dragon Racing was taken up by Audi LMP1 star Loic Duval. It seems as though the Spaniard might now be retired but he is continuing on in racing as a Managing Director at Dragon Racing in charge of developing technical and commercial relationships.

Also on Thursday, China Racing announced that Charles Pic would make his Formula E return for the first time since the first race of the season when he finished 4th for Andretti Autosport. He replaced Ho-Pin Tung who was previously replaced for Round Three by Antonio Garcia.

Not a late substitute was Scott Speed who became the fourth driver in Andretti’s #28 and the sixth different driver to run an Andretti Autosport Formula E team. That’s as many drivers as Teams’ Championship leaders e.dams, Virgin and ABT combined have run this season. 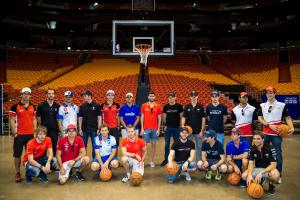 The problem with this is that is makes Formula E look like a bit of a gong show. Their version of musical chairs makes the drivers changes in sportscar racing look tame in comparison. A top flight series doesn’t have this sort of turn over (keeping in mind that I wrote this before Sauber and Manor have committed to drivers for a whole season).

If the FIA wants Formula E to be taken seriously as the future of motorsport, and it very well could be the future of motorsport, they need to find a way to make the drivers and teams care enough to make it their top priority. There is more commitment out of drivers in SCCA amateur racing to show up for every event than there is from the drivers and teams in Formula E.

Maybe the FIA needs to start tightening up the rules over nominating drivers for races. I know that there’s an entry deadline of a couple of weeks in advance for NASCAR races. Maybe teams should be required to name their driver some eight days before an ePrix (the Friday prior to running). It doesn’t look too professional when the motoring media turn up for an ePrix and no one knows who’s racing when their flights land.

While the teams aren’t really helping Formula E look credible with their version of musical chairs, chassis manufacturer Spark made a much-needed improvement to the car. They’ve shipped out upgraded suspension components to teams after a number of suspension failures in the South American rounds put front-running cars out of the race. The hope is that the beefier rear pushrods and front wishbones will hold together better on the bumpy street circuits. It’s worked so far. Just ask Scott Speed who thumped the wall pretty good in Turn 4 before his pit stop.

What was once nine is now ten and then became eleven. The 2014-15 Formula E Championship has added a tenth race because Bernie is all about cha-ching cha-ching and that ba-bling ba-bling. Wait. Bernie isn’t in charge of Formula E? Then how the hell do you explain this?

Formula E’s tenth race will be run as the penultimate event between Berlin and London in Moscow, Russia. The Berlin race was moved up a week to May 23rd in order to accommodate the June 6th race in Moscow.

We can talk all day about the politics of Russia (and I have in a few places between The Lowdown and et geekera so just use that search box) but Russia is definitely making a statement with the race. It’s not just any other showcase for Russia because this race will be run in the shadow of the Kremlin. They spent billions of dollars on rebuilding Sochi for the 2014 Olympics and Formula 1 grand prix but they’ll get a more iconic image out of a Formula E ePrix with the Kremlin in the background.

So where do I get the 11th race from? The London ePrix will be a two-day double-header event. The Moscow race was announced in early February while the 11th ePrix was announced near the end of the month. That’s one better way to make an event seem big than double-points.

The next round of the 2014-15 Formula E championship comes to us in a brisk three weeks. After some 63 days between rounds of the Championship, we’re only taking a 21-day break between Miami and Long Beach. How will the teams manage with this lightning fast turn-around?!

This might be the most interesting race of the season because this one is on most of an IndyCar track. The difference is that Turns 1 through 6 are removed via a right turn at the end of where the pit lane is that cuts about a kilometre off the circuit’s length. The important thing is that the hairpin is still there. That’ll look good on TV, even if we don’t get the fountain turn.

Looking ahead to Long Beach, there’s no two driver’s hotter than Nicolas Prost and Sam Bird. These two seem to have the Spark-Renault cars figured out and are the quickest drivers in the field. If you were to ask me for a darkhorse, I’d put my money on Antonio Felix da Costa. He was the winner in Buenos Aires and I’d hazard that track is the closest in layout to Long Beach so maybe lightning can strike twice and he can become Formula E’s winningest driver.